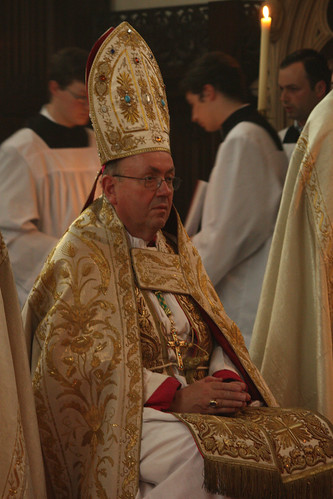 I note with approval the appointment of a new Archbishop of Liverpool.

Most Rev. Malcolm McMahon, Bishop of Nottingham has been translated.

My English clerical friends are writing with their views and I am, so far, optimistic!   Yes, yes… some think he leans towards the Left on some points.  First, I don’t let the perfect be the enemy of the good, and neither should you.  Second, I am not sure what those Left points might be.    The general consensus among my contacts is that he is “kind” and “holy”.

And he is favorable to traditional liturgy, which is a solid foundation for everything else he does.

Those of you will long memories will recall that my friend Fr. Tim Finigan wrote about his participation at one of the Merton College liturgical conferences. Here is his post from 2008. Fr. Finigan has also chimed in today HERE. In 2008, Fr. F wrote:

After dinner, Bishop McMahon was invited to speak. His address was warm, humorous, inspiring and – most significantly – a genuine, positive, generous affirmation of all that the conference was trying to achieve. Normally, I would hesitate to publish anything concerning an unscripted speech on a private occasion. Two things prompt me to do so. First, Bishop McMahon, in an aside, obviously intended to amuse those present, acknowledged the presence of a reporter from the Tablet. The reporter was a good chap and I am sure we will see a balanced report – but the point is that His Lordship’s remark in the context of an after dinner speech was obviously intended as a laugh with those who were present, most of whom, shall we say, do not entirely agree with all that the Tablet publishes.

My second reason for venturing to comment on Bishop McMahon’s speech is that when leaving the bar after spending a brief but not stinting time socially with the clergy after dinner, he encouraged me personally to “keep blogging” and jokingly said that he wanted his photo on my blog. (Happy to oblige, My Lord!)

Bishop McMahon unequivocally affirmed his support for Summorum Pontificum, for the liturgical “project” of Pope Benedict and for a conference at which priests were learning to celebrate the usus antiquior of the Roman Rite.

What I think Bishop McMahon’s heartwarming speech did most of all was to convey to those gathered that he was not simply there as a token prelate but that he really enjoyed taking part actively, that he supported our work, and that he was prepared to crack some jokes that he knew we would enjoy, being entirely on our wavelength and, as they say, reading from the same page.

His address was met with a joyful and enthusiastic standing ovation by the priests present and some fellows started us off singing the Ad multos annos to His Lordship, followed by the first verses of “Faith of our Fathers” and “God bless our Pope.”

Bishop McMahon has certainly won the hearts of the priests who came to Merton. All of a sudden, there is someone that many priests loyal to Pope Benedict will be watching closely and including in their mementos at the Mass.

This appointment will have liberals in the English-speaking world, not just in England, involuntarily shivering.

First, it means that Pope Francis is not crushing clerics who are favorable toward Summorum Pontificum.  I am sure that what Bp. MacMahon thinks about the Motu Proprio was not the major factor in his appointment, but you can bet that it was a factor!  I have little… indeed, very little… doubt that his support of the Motu Proprio was used by certain circles as a way to ding him from the list.   FACT: It is possible to support the Extraordinary Form, as a bishop, under Francis.  (Pssssst…. I know no bishop out there is watching out for his career any longer, as of March 2013, but … I’m just sayin’….)

Also, this means that the influence of Archbp Mennini, the Apostolic Nuncio in Ol’ Blighty, has not waned.

Moreover, I am beginning to think that Francis, like Benedict before him, is doing in England what John Paul II did in these USA.  I think he is consciously involved with the appointment of a certain kind of bishop.  In these USA, JP2 focuses for years on the midwestern sees and created, over many years, a kind of critical mass that would begin to perpetuate itself.  It may be that we are seeing that in the UK.  Time will tell.

In any event, with Bp. Davies on the Shrewsbury side of the Mersey and Archbp. MacMahon on the Liverpool side, there is some real potential.  Congratulations to the people of Liverpool.

Fr. Z is the guy who runs this blog. o{]:¬)
View all posts by Fr. John Zuhlsdorf →
This entry was posted in SESSIUNCULA and tagged Archbp. MacMahon, Archbp. Mennini, Archd. Liverpool, Fr. Finigan. Bookmark the permalink.