Of vaccination, a Pope, and anti-Catholic slander 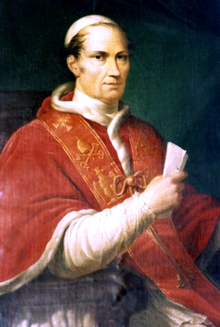 At First Things there is an interesting piece about how enemies of truth, and therefore of God, created a “black legend” around a Pope with disinformation.  The target Pope wasn’t, this time, Pius XII, but rather Leo XII (+1829).

Just as every Easter long-falsified stories about Jesus are warmed up by journalists to increase the print-run of their magazines, so similar nonsense is brought forth whenever issues of science and religion are covered in the media. Whenever one needs to fill an empty page, magazines are quick to run a story about the “persecution” of Galileo and the “fight” of the Church against science. Therefore, I was not surprised that in the current discussions about the ethics of vaccination some claimed that Pope Leo XII (1823–1829) prohibited vaccinations.

The legend appears in a contemporary account by G. D. Godkin, who writes in his biography of King Victor Emmanuel II about the late pontiff with little respect:

He was a ferocious fanatic, whose object was to destroy all the improvements of modern times, and force society back to the government, customs, and ideas of mediaeval days. In his insensate rage against progress he stopped vaccination; consequently, small-pox devastated the Roman provinces during his reign, along with many other curses which his brutal ignorance brought upon the inhabitants of those beautiful and fertile regions.

In 1829 Leo XII declared, “Whoever allows himself to be vaccinated ceases to be a child of God. Smallpox is a judgment of God, the vaccination is a challenge toward heaven.” [Does that even pass the smell test?]

This alleged statement was often used to ridicule the Holy See and Catholic faith. It “proved” that Catholics did not use reason but blind faith and trusted rather divine providence than their intellect. Just like papacy rejected the unification of Italy and acted “irrationally,” so it had (according to Godkin) denounced all progress.

How could a man like Leo XII, after successful inoculations in Europe, America, Africa, and Asia, really reject a treatment that saved innumerable lives?

He didn’t. The whole “announcement” was made up to discredit Leo XII. A black legend was born. Later, when pressured to present evidence, some historians tried to justify the forgery by suggesting that Leo XII had perhaps said something of the sort as Cardinal, and thus before his election, but could again not produce the actual source of the statement.

In reality, Catholics had endorsed vaccinations since the 1720s. It was, after all, Catholic missionaries, mostly Jesuits, who began inoculating Amazon Indians against smallpox in the 1720s. In Europe, Catholic orders set up modern hospital care, and church officials, such as the archbishop of Bamberg in Germany, introduced public vaccinations in the 1780s. In Rome, Pope Pius VII (1800–1823) voiced support for the treatment, and already in 1805 more than eight-hundred newborn Roman babies were vaccinated. The president of the Jimmy Carter Center, Donald Hopkins, notes in his history of small pox, The World’s Greatest Killer. Smallpox in History, that even in the remote villages of Bohemia in the early 1800s the priests constantly reminded their parishioners of the importance of being vaccinated.

Pius VII, who resisted Napoleon, who had imprisoned him, and whom Catholics therefore venerated as a living martyr, was the immediate predecessor of Leo XII. His support for vaccinations should have made historians, who repeated the above-mentioned black legend, cautious: How often did a papal successor reverse course so completely, from endorsement to prohibition—and without a trace in the official papal pronouncements? For anti-Catholic historians the account simply had to be true, because it fit their own perception of Catholicism as intellectually and morally inferior.

For those, who wish to read a thorough refutation of the vaccination legend I recommend the article by Yves-Marie Bercé and Jean-Claude Otteni, The Practice of Smallpox Vaccination in the Papal States (in French). The story that the Catholic Church rejected vaccination as an interference with divine providence is anti-Catholic slander—nothing more.

BTW… if you want to read more about modern disinformation, try this.  It is enlightening, to say the least.

Fr. Z is the guy who runs this blog. o{]:¬)
View all posts by Fr. John Zuhlsdorf →
This entry was posted in "How To..." - Practical Notes, Biased Media Coverage, Liberals, The Drill, The Last Acceptable Prejudice and tagged anti-catholic, Disinformation, Leo XII, small pox, vaccination. Bookmark the permalink.

20 Responses to Of vaccination, a Pope, and anti-Catholic slander