St. Gabriel of Our Lady of Sorrows: Patron of Handgunners

A saint for today.  Terrorists invade your town and set about to do terrible things….

… someone to pray to when ISIS – or whomever – comes to your neighborhood.

Today is the feast of St. Gabriel of Our Lady of Sorrows, Gabriel Possenti.  His feast is set for the third day before the Kalends of March, which is two days before March 1. During a Leap Year, when there is a 29th day in February, the date two days before 1 March is 29 February. Otherwise his feast is 27 February. 27 February is the day he died and was born into heaven in 1862.  I visited his shrine beneath the great mountain Gran Sasso in Italy while I was in seminary.

During a childhood illness he promised to become a religious if he were healed. This actually happened twice, but like many of us who make promises to God if He would only do something for us, Francesco forgot about it.  However, during a procession in honor of an image of Our Lady of Sorrows, Francesco finally felt strongly the calling to be a religious.  He took off for a Passionist house and novitiate on the eve of his engagement. 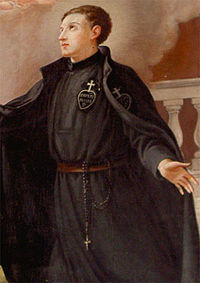 Gabriel was canonized by Pope Benedict XV 1920 and declared him patron of Catholic youth. In 1959, Pope John XXIII named him the patron of the Abruzzi region, where he spent the last two years of his earthly life. His is also invoked by seminarians and novices.

Thus, some consider him to be the patron of shooters and handgun users.  For good reason.

And… I encourage all you women and men out there to get lots of training and practice, whether or not you decide to get a concealed carry weapon permit.  Ask St. Gabriel to help you in the process.

Be ready for when “Garibaldi’s” troops show up and keep repeating what the saint said:

“I want to break my own will into pieces, I want to do God’s Holy will, not my own. May the most adorable, most lovable, most perfect will of God always be done.”

On Fox Radio today I head about a theme park for … guns… machine guns.   HERE