AURORA ALERT! Events of terrible beauty, presaging we know not what.

Since Sunday a series of Earth-directed CME’s have created Aurora Borealis visible as far South in these USA as, I hear, Arkansas!  I know I will go out to look.

Tonight, get out there if you have good viewing conditions, and look for the “Northern Lights“. They are events of terrible beauty, presaging we know not what.

One of these days, friends, there will be a huge coronal mass ejection from your planet’s yellow star that strikes your planet square on.  The result could be a vast electromagnetic pulse (EMP) which fries almost all your electronic stuff.

You will be plunged in an instant back to something like the 19th century.

Millions would die in these USA.  Will you have what it takes to survive?

On the other hand, there could be nuclear attacks that cause EMPs, or perhaps there will be a pandemic or other natural events which brings down the world’s economy, resulting in much the same chaos.

I remind you to reflect on what could happen to us if there were another Carrington Event.

This last Coronal Mass Ejection was Earth-directed.  If it were larger… we could be in deep problems RIGHT NOW.

And… GO TO CONFESSION!

SOLSTICE GEOMAGNETIC STORM: A series of CMEs hit Earth’s magnetic field on June 22nd, producing a severe G4-class geomagnetic storm. Northern Lights spilled across the Canadian border into more than a dozen US states, including places as far south as Colorado, Georgia, Virginia and Arkansas. “The auroras did not disappoint,” says Chris Cook, who witnessed the display from Cape Cod, Massachusetts

“They were visible in deep twilight!” he adds. “I positioned myself on a beach overlooking Cape Cod Bay so I could capture the reflection in the water at low tide.”

More auroras are in the offing as Earth’s magnetic field reverberates from the CME strikes. NOAA forecasters estimate a 90% chance of polar geomagnetic storms on June 23rd, subsiding only a little to 70% on June 24th. 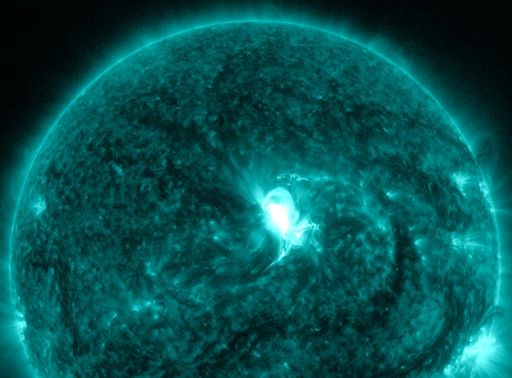 X-ray and UV radiation from the flare ionized the upper layers of Earth’s atmosphere, causing a blackout of some shortwave radio signals over North America (blackout map). Mariners and ham radio operators, in particular, may have noticed disturbances at frequencies below ~20 MHz.

Perhaps, since I am getting into Ham Radio now, tonight I’ll watch that movie with Jim Caviezel…  and I shift some ammo cans from storage!

Fr. Z is the guy who runs this blog. o{]:¬)
View all posts by Fr. John Zuhlsdorf →
This entry was posted in "How To..." - Practical Notes, Global Killer Asteroid Questions, Look! Up in the sky!, Semper Paratus, TEOTWAWKI, The Coming Storm and tagged aurora borealis, Carrington Event, CME, Coronal Mass Ejection. Bookmark the permalink.