In 1246, Robert of Thourotte, Bishop of Liège, Belgium, had instituted in his diocese the feast now known as Corpus Christi at the request of an Augustinian nun Juliana of Cornillon, who composed an office for it.  In 1264, Pope Urban IV ordered the feast of the Body of Christ to be celebrated as a holy day of obligation for the universal Church on the Thursday after Trinity Sunday and accepted the texts by the Angelic Doctor for the Mass and office.

Today’s Collect, composed by the St. Thomas Aquinas (+1274) and used at Benediction, was assumed into the post-Tridentine 1570 Missale Romanum where it has remained unchanged in all subsequent editions.

I love that snappy clausula at the end… iúgiter séntiámus!  This is a marvelous prayer to sing.  Fortunately I get to do so often since in those places where I lurk we have frequent Benediction of the Blessed Sacrament with all the prayers in Latin.

Shall we have some vocabulary?  In case you were trying to look for reliquisti in your own copy of the Lewis & Short Dictionary, that esteemed tome of Latin wisdom, it is the perfect of relinquo.  It means a range of things like, “leave, leave behind” not only in the sense of in the sense of abandoning but more importantly for us also in the sense of bequeathing.  A memoria is not just “memory, the faculty of remembering,”,  it is also, “the time of remembrance” and “an historical account, narration.”  In early Christian Latin works memoria also means “a monument” in the sense of a “memorial”.

Iugiter is a great word.  It comes ultimately from the noun iugum, “a yoke or collar for horses”, “beam, lath, or rail fastened in a horizontal direction to perpendicular poles or posts, a cross-beam”.  The yoke was a symbol for defeat and slavery.  A victorious Roman general would compel the vanquished to pass under a yoke (sub iugum whence the English word “subjugate”) made of spears as a token of defeat. Vae victis! was their wail, “Woe to the vanquished!”  The prisoners were yoked together and paraded in the returning general’s triumph procession through the Forum’s via sacra to the temple of Capitoline Jupiter.  Iugiter (an adverb from the adjective iugis “yoked together”, cf. iungo) signifies “continuously”, as if one moment in time is being yoked together with the next, and the next, and so on.

LITERAL TRANSLATION:
O God, who bequeathed to us under a wondrous sacrament
the memorial of Your Passion,
grant us, we implore,
to venerate the sacred mysteries of Your Body and Blood
in such a way that we constantly sense within us the fruit of Your redemption.

I have heard from many places that the customs of Corpus Christi processions, Forty Hours Devotion, and Eucharistic Adoration are returning in force.  People want and need these things.  They help us to be better Catholic Christians through contact with Christ.  The bad old days of post-Conciliar denigration of these necessary practices lingers a bit but the aging-hippie priests and liturgists are losing ground under the two-fold pincer of common sense and a genuine Catholic love of Jesus.

In the seminary I attended in the 1980’s we were informed with a superior sneer towards those quaint old processions and devotions that, “Jesus said ‘Take and eat, not sit and look!’”

Somehow, “looking” was opposed to “receiving”.

This is the same error, I think, inherent in the puzzling idea that if people aren’t constantly singing or carrying stuff during Mass they are not “actively” participating as if listening and watching must be only “passive”.

Younger people no longer have that baggage, happily.  They desire the good things of our Catholic inheritance.  They resist passé attempts to make Jesus “smaller”.  They want much more, as much as the Church can give.

Remember: this is not the fault of the Council itself.  If blame must be assigned it rests on the shoulders of those who misappropriated the Council’s authority to sustain their own ideas. 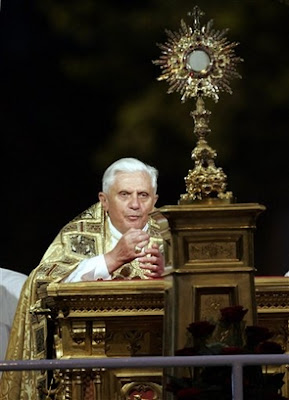 Those oh so enlightened experts of the Council’s “spirit” will benignly indulge the view that old rites and customs once served a purpose long ago, perhaps for the ignorant old-world peasant and unschooled new-world immigrant, but our shiny new up-to-date man – er um – person doesn’t need those things anymore.  In this modern age man has changed.  Eucharistic devotions would be harmful rather than helpful.  They must never be permitted!  We won’t crawl in submission before God anymore. We stand!  We do not go in archaic triumphal processions or kneel to Him as judgmental King.  We take (h)im/she/it/ourselves by the hand as helping Buddy!  We are grown up now, not child-like peasant slaves before a master who is lord and father of our household.  We have changed and so old things are no longer suitable.

Perhaps passing details of society have changed, its fashions and ideas shifting like sandbars, but man has not changed however well dressed or sophisticated.  Admittedly there is wider education now and greater affluence in first world countries.  Many advances have been attained.  But we, as human beings, have not changed.  We poor fallen souls, citizens of modern society and newly arrived immigrants equally, all need concrete things through which by our senses we can perceive invisible realities.  Urbane schooling and wealth might well be greater obstacles to the spiritual life than poverty and ignorance, urban or rustic.  Man remains human always, good but wounded.

In 1986 the English edition of Joseph Ratzinger’s Feast of Faith was published by Ignatius Press.  In that volume Benedict XVI reflected on the feast of Corpus Christi.  His Holiness juxtaposed the sad decline of Eucharistic devotions after the Second Vatican Council with what the Council of Trent taught.  Although the anti-triumphalism of some post-Conciliar liturgists had repressed Eucharistic exposition, adoration and processions,

the Council of Trent had been far less inhibited.  It said that the purpose of Corpus Christi was to arouse gratitude in the hearts of men and to remind them of their common Lord. (cf. Decr. desc. Euch., c. 5; DS 1644).  Here in a nutshell, we have in fact three purposes: Corpus Christi is to counter man’s forgetfulness, to elicit his thankfulness, and it has something to do with fellowship, with that unifying power which is at work where people are looking for the one Lord.  A great deal could be said about this; for with our computers, meetings and appointments we have become appallingly thoughtless and forgetful (pp. 128-9).

Let us consider Trent again for a moment.  There we find the unqualified statement that Corpus Christi celebrates Christ’s triumph, his victory over death. Just as, according to our Bavarian custom, Christ was honored in the terms of a great state visit, Trent harks back to the practice of the ancient Romans who honored their victorious generals by holding triumphal processions on their return.  The purpose of Christ’s campaign was to eliminate death, that death which devours time and makes us cultivate the lie in order to forget or “kill” time.  … Far from detracting from the primacy of reception which is expressed in the gifts of bread and wine, it actually reveals fully and for the first time what “receiving” really means, namely, giving the Lord the reception due to the Victor.  To receive him means to worship him; to receive him means precisely, Quantum potes tantum aude – dare to do as much as you can.  (p. 130).

Christ invites us to learn His ways through the image of His yoke taken upon our shoulders (Matthew 11:29-30).  In terms of the world crosses and yokes are heavy instruments of bitter humiliation.  Jesus says His yoke of subjugation is “sweet” and “light”.  True freedom lies precisely in subjugation to Him.  Yokes are sweet when they are His.

To win for us this sweet yoke, He did not defeat us, He defeated the death in us.

We need no longer fear the death we all face.

We cannot honor enough the Body and Precious Blood of Christ by which we were redeemed.

I affirm my subjugation to Christ Victor, God and King, triumphant over death, vanquisher of hell and my sins.

Before His transforming glory in the Eucharist I am content to kneel until with His own hand He raises me.

Fr. Z is the guy who runs this blog. o{]:¬)
View all posts by Fr. John Zuhlsdorf →
This entry was posted in Liturgy Science Theatre 3000, Our Catholic Identity, WDTPRS and tagged Corpus Christi. Bookmark the permalink.