“Therefore, let us not sleep, as others do; but let us watch, and be sober.” 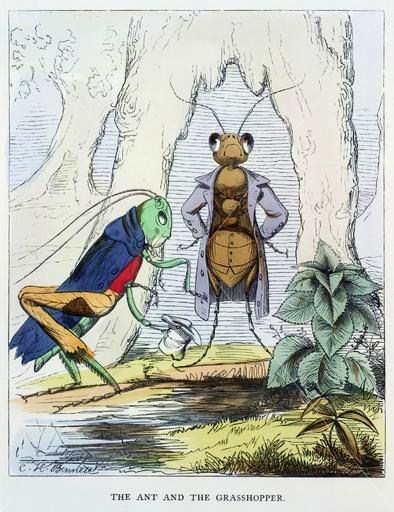 In a field one summer’s day a Grasshopper was hopping about, chirping and singing to its heart’s content. An Ant passed by, bearing along with great toil an ear of corn he was taking to the nest.

“Why not come and chat with me,” said the Grasshopper, “instead of toiling and moiling in that way?”

“I am helping to lay up food for the winter,” said the Ant, “and recommend you to do the same.”

“Why bother about winter?” said the Grasshopper; we have got plenty of food at present.” But the Ant went on its way and continued its toil. When the winter came the Grasshopper had no food and found itself dying of hunger, while it saw the ants distributing every day corn and grain from the stores they had collected in the summer.

Then the Grasshopper knew: It is best to prepare for the days of necessity.

In ancient version of Aesop’s classic, the grasshopper simply dies.

I suppose Democrats got hold of it.

The grasshopper will soon be redefined, in a Disney movie, as the transgender victim of formician indifference and the State will decree the fair distribution of all antish goods, and there will be a happy Bollywood ending.

And then there’s reality.  Actually, nothing in the version above says that the ants distributed anything to the grasshopper or to anyone other than other ants.  Right?

It has been a while since I have mentioned to you a few things, to which I hope you will attend.  While I am always telling you to be spiritually prepared against the moment of your death, which could strike right NOW… you should also physically prepare for the dark day of struggle or flight.

Remember: Bad things always happen to other people… until it’s your turn.

I’ve seen lately on the news that tornadoes have devastated villages, that wild fires have caused the evacuation of towns, trains with nasty chemicals cause flight.

Could you, in the few moments that you have, grab a bag or two and, alone or with your family, get to relative safety?

There are some pre-packed bags for sale, like this, which can give you ideas.

There are many levels of preparedness.  All of us should be at least minimally prepared if for no other reason that we do not become even more of a burden to others.  Also, if you are responsible for the well-being of dependents, then… what are you thinking about if not about their well-being and safety?

There are regional considerations, such as the commonplaces of fires or earthquakes or storms.  Other have threats such as mobs in cities or angry ex-boyfriends or husbands who come knocking, and not in a nice way.

Consider having a plan, including a bag to grab with basics, including necessary documents keys, etc.  Give some thought to this.  Know what your route will be and if that route is viable.  Designate meeting places if you are separated.  Practice getting out of your house and where to go.  Think now about what you will need the instant you realize that, no, your house is now completely engulfed in flames and you won’t have again anything that is inside.

Also, remember that it is usually the case that when seconds count, the police are only minutes away.

It could also make all the difference if you have, in advance, networked with other people who have also done some solid preparation.

I bring this up, friends, but I don’t ever want to hear about horrible things happening to any of you that might have been avoided with some forethought, planning and practice.

Priests need to think about this too.  HERE

And don’t forget a UPS or two!  HERE

Fr. Z is the guy who runs this blog. o{]:¬)
View all posts by Fr. John Zuhlsdorf →
This entry was posted in "How To..." - Practical Notes, Semper Paratus, TEOTWAWKI, The Coming Storm and tagged Aesop, preparedness. Bookmark the permalink.