ASK FATHER: Of different shades of rose, madder, and debauchery 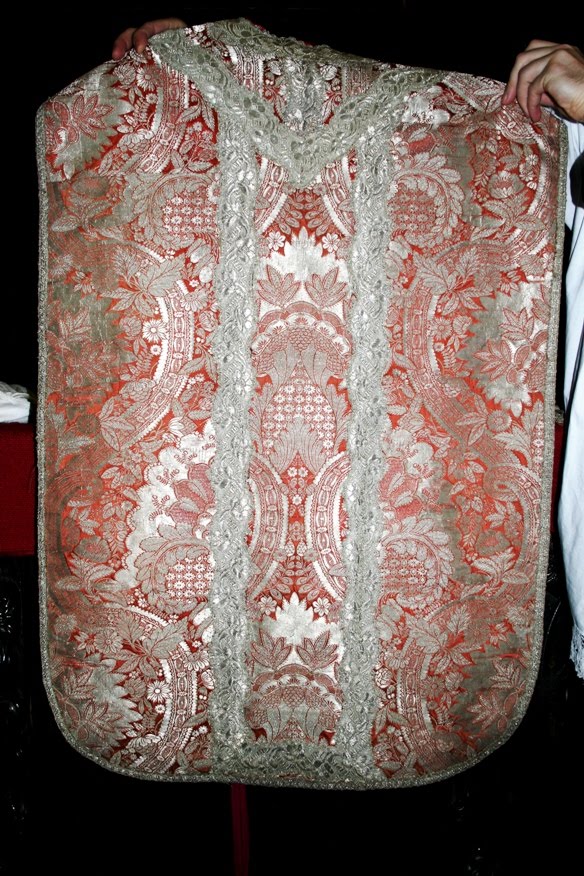 So, are there different roses for Advent and for Lent?

There is, of course, a huge variety in what we see as “rose”, ranging from baby-rattle pink to a reddish hue.

Some say that the proper Roman rose, which is sort of salmon (with that orange touch) is what is generally called rose madder, from dyer’s madder root, rubia tinctorum.

Here some shades that one might see in rose (other than bubble-gum pink) which are variations of rose madder:

A friend sent this shot of a vestment he had made. My home parish has a set not unlike this, with blue trim. My new set for Sung Masses is like this in moire acetate. Here is that salmon shade.  I have an antique silk Roman vestment like this.

As it is silk, however, you also get some of the shades above. Along with the salmony shade… 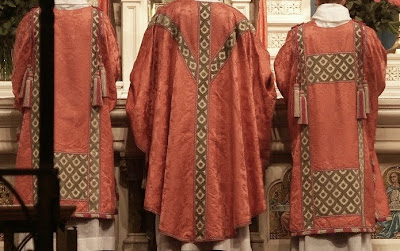 I suppose that if a parish were able to do so, they could differentiate the attitudes of Advent and Lent through the use of different roses.    Perhaps the redder madder rosacea for Lent and the lighter or more salmon-like for Advent?

Speaking of madder, I am reminded of the scene in the Aubrey/Maturin novel by Patrick O’Brian‘s HMS Surprise.  (UK HERE) The ship’s surgeon, an eminent naturalist, Dr. Stephen Maturin was conducting an experiment on some rats.  He had been feeding them madder.  He intended eventually to dissect them to see if the red stuff had colored their bones and penetrated to the marrow.  It was not to be.  Hungry midshipmen ate his fat, madder saturated rats whilst he was marooned on St. Paul’s Rock.  Note the spiffing partitive genitive in the first sentence of the following:

In time it appeared that Babbington had eaten of the Doctor’s rats; and that he was sorry now.

‘Why, no, Babbington,’ said [Capt.] Jack. ‘No. That was an infernal shabby thing to do; mean and very like a scrub. The Doctor has been a good friend to you – none better. Who patched up your arm, when they all swore it must come off? Who put you into his cot and sat by you all night, holding the wound? Who – ‘

Babbington could not bear it; he burst into tears. Though an acting-lieutenant he wiped his eyes on his sleeve, and through his sobs he gave Jack to understand that unknown hands had wafted these prime millers [aka rats] into the larboard midshipmen’s berth; that although he had had no hand in their cutting-out – indeed, would have prevented it, having the greatest love for the Doctor, so much so that he had fought Braithwaite over a chest for calling the Doctor ‘a Dutch-built quizz’ – yet, the rats being already dead, and dressed with onion-sauce, and he so hungry after rattling down the shrouds, he had thought it a pity to let the others scoff the lot. Had lived with a troubled conscience ever since: had in fact expected a summons to the cabin.

‘You would have been living with a troubled stomach if you had known what was in ‘em; the Doctor had -’

‘I tell you what it is, Jack,’ said Stephen, walking quickly in. ‘Oh, I beg your pardon.’

Babbington looked wretchedly from one to the other, licked his lips and said, ‘I ate your rat, sir. I am very sorry, and I ask your pardon.’

‘Did you so?’ said Stephen mildly. ‘Well, I hope you enjoyed it.

Listen, Jack, will you look at my list, now?’

‘He only ate it when it was dead,’ said Jack.

‘It would have been a strangely hasty, agitated meal, had he ate it before,’ said Stephen, looking attentively at his list. ‘Tell me, sir, did you happen to keep any of the bones?’

‘No, sir. I am very sorry, but we usually crunch ‘em up, like larks. Some of the chaps said they looked uncommon dark, however.’

‘Do you wish me to take notice of this theft, Dr Maturin?’ asked Jack.

‘No, my dear, none at all. Nature will take care of that, I am afraid.’

Stephen is eventually revenged in a creative way – involving laxatives – which also kept him true to his Hippocratic Oath.

Later in that same book, by the by, Jack will debauch Stephen’s pet sloth with grog and turn it into an alcoholic.

Which it’s tough going for the Doctor on the high seas, as Preserved would put it.

Have a rosy Sunday.

The shades of vestments have a lot to do with the history of trade and of dyes. Once upon a time in the West, there was a lot of rose material, which you see in the movies of the late great John Wayne!