ASK FATHER: Holding hands or the “orans” position during the Our Father. Wherein Fr. Z rants.

Over at the Fishwrap (aka National Schismatic Reporter) there is a question today about hold hands during the Our Father.  As you might guess they reference liberals who are probably unreliable.  What say you?  Is hand holding forbidden in the Novus Ordo?   How about in the Tridentine Mass?

I’ve written about this several times, so I’ll brush some frost off an answer from the ice-box  (easily found using the search box on the side bar) and add to it.

First, I’ll remind you that I had a POLL on the subject.  Let’s just say that, when it comes to hand holding during the Our Father, for both men and women NO was the overwhelmingly dominant choice.  HERE

There is no specific prohibition against holding hands during the Our Father, or any other time at Mass for that matter, either for the Novus Ordo or the TLM.

However, there is also no provision to ask or invite people to do so.  Were a priest or anyone else to do so during Mass he/she/? would commit a grave liturgical abuse.

Priests can’t just make stuff up and impose things because they think it is meaningful.

For those who don’t care to partake, the hand holding thing – which I hope will soon vanish – is a seriously irritating invasive aberration.  The aforementioned POLL shows that most people don’t like it and want to avoid it.

That said, if people spontaneously desire to do this, hold hands, I cannot see any problem with it.

“But Father! But Father!”, some of you libs are bleating from the depths of your sclerotic hearts, “You can’t have it both ways!  You legalists are all alike.  So can you hold hands or not?  See?  you are caught in your own trap. HA!  You try to crush the spirit!  Especially the spirit of Vatican II! Why? Because YOU HATE VATICAN II!”

Friends, don’t expect libs to be logical.  Lib logic is sort of like a bag full of cats: its always on the move but who knows what’s really going on in there?  We, on the other hand, filled with compassion and common sense just want what the Council Fathers of Vatican II would want: follow the books faithfully.  That’s the true spirit of Vatican II: be faithful, apply common sense and avoid stupid.

Hence, I can say… No, people should not hold hands during the Our Father… unless they do.

How do we square that circle?

I can picture spouses holding hands… each others, that is, and not just little junior’s to keep him from opening a nearby lady’s purse.  That’s a good reason to hold a child’s hand during Mass by the way.  Also, moms and dads, when you have babe in arms, hold their hands down firmly at the moment of Holy Communion!  Please?  Father doesn’t need their curious help.  But I digress.

I can picture myself with a Mass kit on a crate with candles in the London Underground during the Blitz.  As I say Mass, horrible booms tremble through the ground and echo in the tube tunnels as bombs rain down from German airplanes.  Loose tiles fall and children cry.  People who have never met are holding hands.

I can picture myself saying Mass just after an announcement that a terrorist group lit off dirty suit-case nukes in Washington DC, Chicago, and LA.  People flood to churches out of fear, grief and anger, looking for direction and solace.  At the Our Father they spontaneously reach for each other’s hands.

I can picture myself saying a Requiem Mass for five teens killed in a car accident. Their classmates and families hold hands.

I can picture an asteroid… well, you get my drift.

Congregations of total or near total strangers might be spontaneously driven sincerely to hold hands in some circumstances.

But – and perhaps it is a lack of something on my part – I cannot see this hand holding stretch exercise across aisles, for example, as a regular practice as anything other than contrived sentimentalism which distracts us from the transcendent nature of God Almighty and the meaning of the petitions in the Our Father.

Yes, the Our Father is a series of petitions, which are easily recognizable especially in the way that the Gregorian chant format provides the text and melody in the Roman Missal. 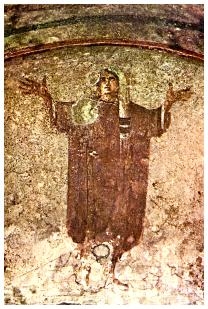 A 3rd c. allegorical depiction in the Catacombs of Priscilla of the praying Church, hands in the orans position. This is NOT, as some loony feminists claim, a fresco of a female priest.

On a related note, during the Our Father the faithful are not to use the so-called “orans position” (“praying position” with hands extended, open), which is the proper hand position of the priest celebrating the Mass.  Even worse is when they hold that position after the Our Father through the (Protestant) addition that follows.  The orans position is reserved for a certain liturgical role (read: priest – not even deacons).  That position of extended hands is not appropriate for the lay faithful in the pews.

We must not mix or confuse liturgical roles.  Lay people have their own dignity without trying to jazz them up by – and how condescending is this? how clericalist? – allowing them to do what the priest does.  That’s the worst sort of clericalism and it is always used by libs, isn’t it?  The subtle message given, when roles are purposely confused for the sake of “active participation” or “getting the laity involved”, is really “You aren’t good enough on your own, so I’ll let you do something that I can do.”   Grrrrr.  But I digress.

So, I repeat: I am unaware of a prohibition of holding hands during Mass.  Spontaneous hand holding? Fine.  It must never be invited or imposed by someone with a microphone anywhere near the altar or by anyone in the pews.

Fr. Z is the guy who runs this blog. o{]:¬)
View all posts by Fr. John Zuhlsdorf →
This entry was posted in "But Father! But Father!", "How To..." - Practical Notes, ASK FATHER Question Box, Linking Back, Our Catholic Identity, Wherein Fr. Z Rants and tagged holding hands, orans position. Bookmark the permalink.