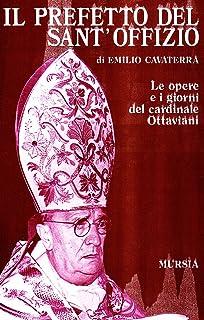 A priest friend sent this around to a select group.  I think more people should know about it.

As we read about the proposed Curial “reforms”  Ottaviani reminds us that the seeds for this were sown by Paul VI another disastrous decision for the Church among so many others by Paul VI and the price the Church will pay for this politicization of the Church:

when in the reform of the Curia immediately after the Second Vatican Council, the Holy Office was recast and its title “Supreme  Sacred Congregation” was taken away, Ottaviani commented on the fact before a group of his collaborators with these words (I am giving you their gist): “Remember this is a dark day for the history of the Church because we are not dealing with form with titles but with substance. [NB] Indeed, up to now, the supreme principle of governance for the Church was revealed doctrine, whose custody and right interpretation in the Church is entrusted in first place to the Pope, who makes use of this Congregation and that’s why it is ‘Supreme’. Now I don’t know what will be the critical inspiration for the governance of the Church, but I fear that the diplomatic and contingent will prevail.  I foresee that the Church will suffer much damage from this but because assisted by the Holy Spirit, sooner or later, she will take up the standard of government inspired by Revelation and its essential contents….

I remind the readership that the Congregation for the Doctrine of the Faith – if reports are accurate – is about to be knocked down a couple of levels of importance under some new “super dicastery” for Evangelization.

This is a Very Bad Idea, for the reasons that Card. Ottaviani mentioned at the time of the Pauline reforms.

There is another reason, too.

In the context of the “New” Evangelization we are supposed to be about, I have often wondered aloud about, “What about the ‘Old’ Evangelization?  When did that stop? What can it teach us about the ‘New’?  Is is substantively different, or is it mostly the same but with a different emphasis and audience?  What’s ‘Evangelization’ anyway?”

Since this is the First Day of the Novena after Ascension and before Pentecost, let’s bring these mysteries into play.

Before His Ascension, in Luke 24, the Lord tells the disciples that

“repentance and forgiveness of sins should be preached in his name to all nations, beginning from Jerusalem.”

He said that it was prophesied, as indeed it was in Is 52 & 53 about the Suffering Servant and in Jonah, when God’s servant preached to the Ninevites.  What did Jonah (a type of Christ, a foreshadowing figure) preach?  Repentance for sins.

Evangelization is about conversion – first and ongoing – metanoia.  That means that bringing the “Good News” to people – whether baptized or not – MUST involve preaching repentance for sins.   This is essential for any kind of evangelization according to the way the Lord intended it.  Christ effectively says that there is no evangelization without repentance for sins.  If we gloss over repentance for sin, whatever it is that we do we are not doing what Christ commanded.   Repentance is a universal dimension of all evangelical practice.  It was to start with the Jews and go to all nations.

I’m not making this up.  “… repentance and forgiveness of sins should be preached…”.

Some people very high in the hierarchy of the Church and some who are not so high are preaching that you don’t have to make changes, change your view of sin and your life.  They talk about joy joy joy happy happy happy but they don’t mention repentance and true conversion.

Sure! Go to Communion without changing your life.

If you leave out sin and repentance, you don’t have any kind of authentic evangelization.

Evangelization does not have to dwell only on repentance, of course.  Repentance and reconciliation results in joy.  However, repentance for sins must be first at least logically if not chronologically.   It also must probably be chronologically first, too.

But those who exclude or diminish repentance… FAIL.

Fr. Z is the guy who runs this blog. o{]:¬)
View all posts by Fr. John Zuhlsdorf →
This entry was posted in The Coming Storm, The Drill and tagged Card. Ottaviani, CDF, evangelization, forgiveness of sins, Holy Office, Luke 24, New Evangelization, repentance. Bookmark the permalink.