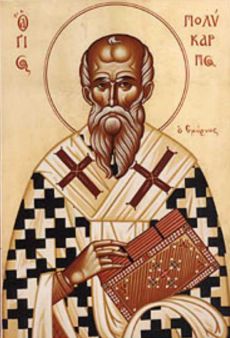 St. Polycarp (+156) was Bishop in Smyrna (modern Izmir, Turkey).  When young he was a disciple of the elderly St. John the Apostle and Evangelist.  He knew St. Ignatius of Antioch.  When Ignatius was being conveyed to Rome for his exectuion, he met Polycarp at Smyrna and later, when Ignatius was in Troas wrote Polycarp a letter which has survived.  We have one letter written by St. Polycarp and that to the Church in Philppi of Macedonia.  That Polycarp was a key figure in the ancient Church in that area is made evident by the fact that he was involved with the Bishop of Rome, Pope Anicetus in trying to determine the Easter celebration in Rome itself.

Polycarp was martyred, with twelve others, when he was an old man, 86, during a time of persecution.  We have the "acts" or legal proceedings and description of his martydom.   On Holy Saturday, he was threatened with death in the fire if he would not abjure the Christian faith.  Polycarp responded that the fire here would last only a a short time, but the fire prepared for the wicked in hell lasted forever.  They burned Polycarp.  At the stake he thanked God for letting him drink of Christ’s chalice.  Miraculously the fire didn’t burn him, which seemed to happen a lot with martyrs.  So, they stabbed him to death and burned his body afterward.  The writers of the acts of his martydom say that they gathered his remaining bones, "more precious than the richest jewels or gold" and interred them. These acts have an incredible description of Polycarp’s body turning golden like baking bread, a connection between martydom and the Eucharist:

"When he had said, "Amen" and finished the prayer, the officials at the pyre lit it. But, when a great flame burst out, those of us privileged to see it witnessed a strange and wonderful thing. Like a ship’s sail swelling in the wind, the flame became as it were a dome encircling the martyr’s body. Surrounded by the fire, his body was like bread that is baked, or gold and silver white-hot in a furnace, not like flesh that has been burnt. So sweet a fragrance came to us that it was like that of burning incense or some other costly and sweet-smelling gum."

In life Polycarp defended the Church against the gnostic sect of Valentinians and also against the Marcionite who denied that the God of the Old Testament was also the same God of the New Testament.  To give you something of the character of St. Polycarp, when he ran into Marcion in Rome, Marcion asked Polycarp if he knew who he was.  Polycarp responded: “I know you for the first-born of Satan.” Far from being a simple insult, these words were spoken in charity, to shock the man into repenting his sinful positions and actions.

Aggrego means "to join to a flock".  The amazingly polyvalent capio, in addition to its basic meaning, can also have the overtone of accepting and enjoying, cherishing.

LITERAL TRANSLATION:
O God of all of creation,
who deigned to join blessed Polycarp the bishop
to the number of the flock of martyrs,
by his intercession grant to us
that, grasping with him a share in the chalice of Christ,
we shall rise again unto life eternal.