May 1988: The Protocol of Accord – Lefebvre & Ratzinger

Back in May 1988 Archbishop Marcel Lefebvre of the SSPX signed a Protocol of Accord after negotiations with (especially) then Card. Ratzinger.  People are now talking again of that Protocol.  Will the SSPX be asked to acknowledge the very same Protocol of Accord as before?  I rather think that it will need some tweaking, given that a lot of acrimonious water has slid under the bridge since 1988.

Here is the text of the Protocol of Accord (emphasis mine) signed by Cardinal Joseph Ratzinger, prefect of the Congregation for the Doctrine of the Faith and Archbishop Marcel Lefebvre on May 5, 1988 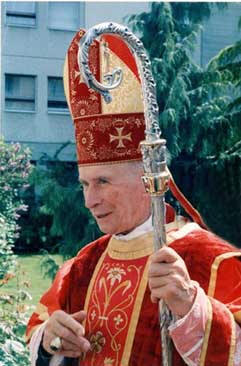 I, Marcel Lefebvre, archbishop-bishop emeritus of Tulle, along with the members of the Priestly Society of St. Pius X, which I founded:

1. We promise always to be faithful to the Catholic Church and to the Roman Pontiff, its supreme pastor, the vicar of Christ, successor of blessed Peter in his primacy and head of the body of bishops.

2. We declare that we will accept the doctrine contained in No. 25 of the Second Vatican Council’s dogmatic constitution, "Lumen Gentium" on the ecclesiastical magisterium and the adherence owed it.

3. Regarding certain points taught by the Second Vatican Council or concerning subsequent reforms of the liturgy and law which appear difficult to reconcile with tradition, we commit ourselves to a positive attitude of study and of communication with the Apostolic See, avoiding all polemics.

4. We declare moreover that we will recognize the validity of the sacrifice of the Mass and of the sacraments celebrated with the intention of doing what the Church does and according to the rites in the typical editions of the missal and rituals of the sacraments promulgated by Popes Paul VI and John Paul II.  [NB: this is in itself a very good reason to imagine that, as part of a conciliation, there may more emphasis on LITURGICAL DISCIPLINE on the horizon; it would have positive benefits for ecumenical dialogue with the Orthodox as well]

5. Last, we promise to respect the common discipline of the Church and the ecclesiastical laws, particularly those contained in the Code of Canon Law promulgated by Pope John Paul II, except for the special discipline conceded to the fraternity by particular law.

Taking into consideration the fact that the Priestly Society of St. Pius X has been formed for 18 years as a society of common life—and based on a study of suggestions by Archbishop Lefebvre and the conclusions of the visit made by His Eminence Cardinal Gagnon—the most suitable canonical model is that of a society of apostolic life.

1. Society of Apostolic Life.
It is a canonically possible solution, with the advantage of the possibility of bringing laity into the clerical society of apostolic life (for example, coadjutor brothers).
According to the Code of Canon Law promulgated in 1983, Canons 731-746, this society has full autonomy, can form its members, can incardinate priests and assures the common life of all its members.
In its own statutes, with flexibility and creative possibility in the light of the known models of these societies of apostolic life, one anticipates a certain exemption in regard to diocesan bishops (cf. Canon 591) in what concerns public worship, the ‘cura animarum’ and other apostolic activities, taking into consideration Canons 679-683. As for jurisdiction regarding the faithful who seek out the priests of the society, it will be conferred on them by the local ordinaries or by the Apostolic See.

2. Roman Commission.
A commission to coordinate relations among the diverse dicasteries and the diocesan bishops as well as to resolve eventual problems and contentions will be established by the Holy See and given the necessary faculties to treat the above-indicated questions (for example, the establishment at the request of the faithful of a place of worship in a place where there is no house of the society, ‘ad mentem,’ Canon 383.2).

3. Condition of People Linked to the Society.
3.1 The members of the clerical society of apostolic life (priests and coadjutor lay brothers): They are governed by the statutes of the society of pontifical right.
3.2 Men and women oblates, with or without private vows, and members of the Third Order linked to the society: They belong to an association of the faithful linked to the society in terms of Canon 303, and they collaborate with it.
3.3 The sisters (that is, the congregation founded by Archbishop Lefebvre) who make public vows: They will constitute a true institute of consecrated life, with its own structure and autonomy, even if one foresees a certain link for the unity of spirituality with the superior of the society. This congregation—at least at the beginning—will be responsible to the Roman Commission instead of the Congregation for Religious.
3.4 Members of communities living by the rule of diverse religious institutes (Carmelites, Benedictines, Dominicans, etc.) and morally linked with the society: It is fitting to accord them, case by case, a particular status regulating their relations with their respective order.
3.5 Priests who as individuals are morally linked with the fraternity will receive a personal status, taking into account their aspirations, and, at the same time, the obligations resulting from their incardination. Other particular cases of this kind will be examined and resolved by the Roman commission.
In what concerns lay people who seek the pastoral help of the society’s communities: They remain under the jurisdiction of the diocesan bishops but—notably for the liturgical rites of the society’s communities—can look to these communities for the administration of the sacraments (for the sacraments of baptism, confirmation and marriage, notification of their own parish remains necessary; canons 878, 896, 1122).

Note: There is reason to consider the particular complexity:
1. Of the question of the reception by the laity of the sacraments of baptism, confirmation, marriage, in the communities of the society.
2. Of the question of communities practicing—without being connected to them—the rule of this or that religious institute.
It is for the Roman commission to resolve these items.

4. Ordinations.
For ordinations, it is necessary to distinguish two phases:
4.1 Immediately: For the ordinations planned shortly, Archbishop Lefebvre would be authorized to confer them or, if he couldn’t, another bishop agreed to by him.
4.2 Once established, the society of apostolic life:
4.2.1 When possible, in the judgment of the Superior General, follows the normal procedure: remitting the dimissorial letters to a bishop who agrees to ordain members of the society.
4.2.2 Because of the particular situation of the fraternity (cf. infra): ordination by a bishop of the society who, among other tasks, would have that of proceeding with ordinations.

5. Problem of a Bishop.
5.1 At the doctrinal level (ecclesiological), the guarantee of stability and maintenance of the life and activity of the society is assured by its erection as a society of apostolic life of pontifical right and approval of its statutes by the Holy Father.
5.2 But, for practical and psychological reasons, the consecration of a bishop member of the society appears useful. This is why, in the context of the doctrinal and canonical solution of the reconciliation, we will suggest to the Holy Father that he name a bishop chosen in the society, proposed by Archbishop Lefebvre.  As a consequence of the principle indicated above (5.1), this bishop is not normally superior general of the society. But it would be good that he be a member of the Roman commission.  [NB: I am guessing that this was the sticking point, finally: those young turks around the late Archbishop who wanted to be bishops played on the old man’s fears and their general mistrust of Rome: they didn’t believe that Rome would a) play ball after the Accord was signed and b) thatthat Rome would allow a bishop acceptable to the SSPX’s needs.  This is conjecture on my part, but it is sound.]

6. Particular Problems to Resolve by Decree or Declaration.
—Lifting the ‘suspensio a divinis’ of Archbishop Lefebvre and dispensing the irregularities incurred through ordinations.
—Anticipation of an "amnesty" and an agreement for the society’s houses and places of worship erected—or used—until now without authorization by bishops.