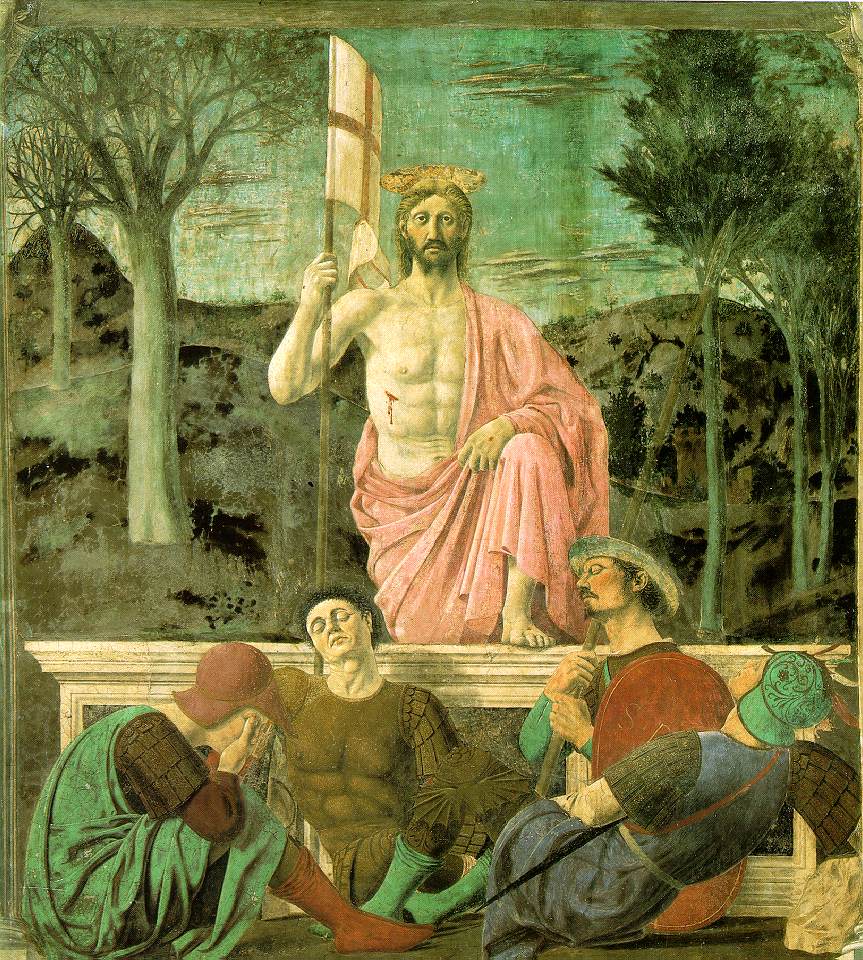 The Lord of life laid down His life. St. John Chrysostom (+407) explained:

"When Jesus had cried out with a loud voice, he yielded up the spirit." This refers to what he had earlier said: "I have power to lay down my life, and I have power to take it up again," and "I lay it down of myself." So for this cause He cried with the voice, that it might shown that the act is down by His own power. [The Gospel of Matthew, Homily 88.1]

Already in the death of Christ the work of the resurrection began. The wonderful St. Hilary of Poitiers (+367) looks at moment the Lord died:

The earth shook. For the earth could not hold this dead man. Rocks were split, for the Word of God and the power of His eternal goodness rushed in, penetrating every stronghold and principality. Graves were opened, for the gates of death had been unlocked. And a number of the bodies of the saints who had fallen asleep arose. Dispelling the shadows of death and illuminating the darkness of hell, Christ destroyed the spoils of death itself at the resurrection of the saints, who saw Him immediately. The centurion and the guards who witnessed this disturbance of the entire natural order confessed Him to be the Son of God. [On Matthew 23.7]

The Lord is laid in His heavily guarded borrowed tomb. The women come on Sunday and find the angel. The tomb is empty and they do not see the one they were seeking. St. Peter Chrysologus (+450) speaks of the Lord’s bodily resurrection:

The Lord rises in the same flesh. He brings back the wounds, takes on again the holes from the nails and bears witness by His resurrection, which were the ravages of His suffering. If so, how could anyone imagine that He might return in some other body? How could anyone fail to believe that He will return in His own flesh? IT is fanciful to think that the servant would be chance disdain His own flesh. Rest assured, my friend, when you arise form the dead it will be you in your own body. Otherwise it would not be you if your should rise in the flesh of another. [s. 76.1]

St. Cyril of Alexandria 9+444) has an interesting comment about the role of the angel at the tomb:

So the angel became an evangelist and herald of the resurrection to the women. "Do not seek," he says, "the one who" always "lives," who in His own nature is life,."among the dead. He is not here," that is, dead and in the tomb, "but He has been raised." He has become a way of ascent to immortality not only for Himself but also for us. For this reason He made Himself nothing and put on our likeness, that "by the grace of God," just as the blessed Paul says, "he might taste death on behalf of all." And so He has become the death of death. [Frag. 317]

The Lord of Life is the slayer of the death that is perpetual. In doing so, He was like the new Adam putting to right what the old Adam had failed to do. Consider how Adam, who was given guardianship of the garden and all that was in it, had also been given guardianship of Eve. Christ overturned the old defeat of our human nature and undid what Adam and Eve had done: St. Jerome has more to say about the new Adam and the curse of Eve:

Two different feelings occupied the minds of the women: fear and joy. Fear came from the magnitude of the miracle they had witnessed and joy from their desire for the resurrection. Nevertheless both feelings impelled their steps. They continued on to the apostles so that through them the seed of faith would be scattered. "And behold, Jesus met them, saying, ‘Hail!’" They who sought Him out and ran to Him deserved to be the first to meet the risen Lord and to hear Him say "Hail!". Thus it happened that Eve’s curse was undone by these women. [Commentary on Matthew 4.28.8-9]

And they worship Him. St. John Chrysostom:

After they had departed with fear and joy, Jesus met them saying, "Hail!" They ran to Him with great joy and gladness. They "took hold of His feet". Thus they received by His touch an irrefutable proof of His resurrection, with full personal assurance of it. And they "worshipped Him." What does He then say? "Do not be afraid." Again, Jesus Himself casts out their fear, making room for their faith: "Go and tell my brothers to go to Galiliee, and their they will see me." Note well how He Himself sends good tidings to his disciples by these women. He thereby brings honor to that sex which is most prone to be dishonored. Through these women He brings good hope and the healing of that which was diseased.

Some among you may desire to be liKe these faithful women. You too may wish to take hold of the feet of Jesus. You can, even now. You can embrace not only His feet, but also His hands and even His sacred head. You too can today receive the awesome mysteries with a pure conscience. You can embrace Him not only in this life but also even more fully on that day when you shall see Him coming with unspeakable glory, with a multitude of the angels. If you are so disposed, along with Him, to be compassionate, you shall hear not only these words, "All hail!" but also those others: "Come, you blessed of my Father, inherit the kingdom prepared for you before the foundation of the world." [The Gospel of Matthew, Homily 89.3]

Before the creation of the world, God knew each and every one of us and desired us for Himself. The death and resurrection of the Lord was for our sake, not His. He gives Himself to us in Communion ("You too can today receive the awesome mysteries…") for our sake, not His. And in the life to come, He opens the way to heaven for those who have accepted Him and His gifts for our sake and that love and glory be multiplied, not because He can change in love or glory.

Imagine how the one who is entirely transcendent and unchanging forever banished the hideous parody of God’s unchanging nature which would have befallen if not for the resurrection. We learn in our study of physic about the principle of entropy and the slow but sure distribution of energy throughout the universe. Eventually, if not for the resurrection, after who knows how long, after how many billions of eons, all energy would be evenly distributed and there would remain only the perfectly lightless, motionless, cold silence of absolute death in the physical realm. With Christ, the Victor King, though the world will eventually be unmade in fire, as we read in the letter of Peter, all will be taken by Him and submitted to the Father so that God might be all in all, as Paul told the Corinthians. All things shall be made new.

When we face our own death or consider the death of loved ones, Christians look to the resurrection. Since we are approaching the month in which we pray in a special way for the dead, let us listen to St. Augustine, who speaks to the hope we find in the Lord and His resurrection: 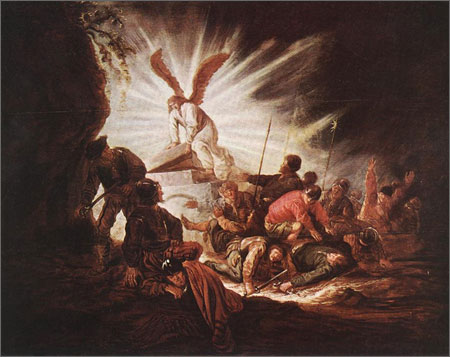 1. When we celebrate days in remembrance of our dead brothers and sisters, we ought to bear in mind both what we should be hoping for and what we should be afraid of. We have reason to hope, you see, because "Precious in the sight of the Lord is the death of his holy ones (Ps 116:15); but reason to be afraid, because "The death of the sinner is very evil" (Ps 34:21). That’s why, as regards hope, "The just will be kept in mind for ever"; while as regards fear, "he will not fear an evil hearing (Ps 112:6-7). There will be something heard, you see, than which nothing could be worse, when those on the left hand are told, "Go into everlasting fire" (Mt 25:41). That is the evil hearing which the just will not fear, because he will be among those on the right hand who will be told, "Come, blessed of my Father, receive the kingdom" (Mt 25:34).

In this life, though, which is spent halfway between and before ultimate good and ultimate evil things, in the midst of middling goods and evils, in neither case the ultimate – because whatever good things come one’s way here are just nothing in comparison with the good things of eternity; and whatever evils one may experience in this life are not to be counted at all in comparison with eternal fire – so in this halfway kind of life we must hold onto what we heard just now in the gospel: "Whoever believes in me", he said, "even though He dies, is alive." He both proclaims life and does not deny death. What does it mean, "even though he dies, is alive?" Even though he dies in the body, he is alive in the spirit. Then He adds, "and whosoever is alive and believes in me, will not die for ever (John 11:25-26). Well, now, "even though he dies"; but how, if "he will not die?" Yes, but even though he dies for a time, "he will not die for ever." That’s how we solve that problem, and see how the words of Truth do not contradict each other, and how they can support our loving devotion. So then, although we are going to die in the body, we are alive if we believe. ….

So let us comfort one another, even with these words of ours. It is possible for the human heart not to grieve for a dear one who has died; it is better, though, that the human heart should feel grief and be cured of it, than by not feeling any grief to become inhuman. [s. 173.1-2]

The recitation of the Rosary directs us to contemplate the face of the Lord in His infancy, His ministry, His suffering and in His glory. In each glimpse of the Lord’s face, Christ reveals man more fully to himself (Cf. GS 22). The Rosary, the patient prayer, can also help us see our neighbor, even the most annoying or disappointing, in a new light. The beads of the Rosary help us to build what we might call "resurrection glasses", which when directing our gaze at our neighbor, helps us to see him in light of the resurrection for which he was destined from before the foundation of the world. Christ died for our neighbors and the resurrection is what defines them too, despite their and our shortcomings.