Some things about St. Agnes

Today is the feast of St. Agnes, to whom I am particularly indebted for reasons many of you can guess.

Many saints have their feast day on their dies natalis, their "birthday into heaven".  The day St. Agnes was martyred was recorded in the register of the ancient depositio martyrum as 21 January.

The little girl was buried by her parents in praediolo suo, on their property along the Via Nomentana where there was already a cemetery. This cemetery expanded rapidly after that, because many wanted to be buried near the grave of the famous martyr. The ancient cemetery grew in stages near the Basilica which Constantina, daughter of Constantine, and Fausta began over her tomb from 337-350 .

There is an acrostic inscription from that time in verses about the dedication of the temple to Agnes:

The Basilica of St. Agnes was reconstructed towards the end of the 5th c. by Pope Symmachus (+514). Honorius I (+638) rebuilt it as a basilica with three naves, adding a wonderful fresco of Agnes. It was worked on again in the 16th c. by St. Pius V and in the 19th by Bl. Pope Pius IX. Excavations in 1901 uncovered the silver sarcophagus made by Pius V for St. Agnes together with St. Emerentiana. It contained the headless body of a young girl.  Zadock gave us a photo of the miraclous protection of Bl. Pius IX when once at the Basilica there was a near disastrous cave-in/collapse and no one was injured. 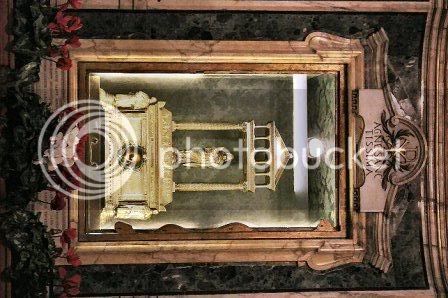 Agnes’s body is in her tomb on the Via Nomentana, but her skull is now at the place of her supposed martyrdom at the Piazza Navona in Rome’s heart. It is a fitting place to venerate a saint so much in the heart of the Roman people even today. It is not usual for people to name their children Agnes in honor of this great virgin martyr, whose name is pronounced in the Roman Canon.

The Piazza itself was in ancient times the Stadium of Domitian (+96) a place of terror and blood for early Christians, far more than the Coloseum ever was. The Piazza is thus called also the "Circo Agonale" and the name of the saint’s church Sant’Agnese in Agone. "Navona" is a corruption of "Agonale", from Greek agon referring to the athletic contests of the ancient world. St. Paul used the athlete’s struggle as an image of the Christian life of suffering, perseverance, and final victory even through the shedding of blood. Early Christian tombs often have wavy lines carved im the front, representing an iron instrument called a stirgil, used by athletes to scrape dirt and oil from the bodies after contests. Victory palm branches are still used in the iconography of saints, as well as wreathes of laurels.

We know about St. Agnes from St. Jerome, and especially St. Augustine’s Sermons 273, 286 and 354. St. Ambrose wrote a stunning hymn about Agnes and also speaks of her in de virginibus 1,2,5-9 written in 377.  Prudentius also wrote a hymn, 14 of the Peristephanon, written in 405. The hymn by Ambrose, one of four in honor of roman martyrs (along with Peter and Paul. John the Evangelist, and Lawrence) is used now in the Roman Church for Lauds and Vespers of her feast.  It is highly classical.

The Ambrosian account of Agnes’s death differs somewhat from others. For Ambrose, Agnes died from beheading. Prudentius has her first exposed to shame in a brothel and then beheaded.

Here is the text of the hymn from the Liturgia horarum for the "Office of Readings" with a brutally literal translation.

St. Agnes of Rome, has two churches in Rome.  Along with St. John the Baptist the only saint in the traditional Roman calendar not a member of the Holy Family, she has two feast days.  Since the reform of the calendar, who now has only one day, alas, though the Baptist still has two.

During excavations at the Basilica on the Via Nomentana in 1901 the silver sarcophagus made by St. Pius V for St. Agnes and St. Emerentiana was uncovered.

It was found to contain the headless body of a young girl.