Last night, as I arrived in the Twin Cities, I had an interesting discussion with the great Fr. GW, one of the most asute political observers I have ever known.

Our discussion turned to the Presidential campaign.

Amidst the sundry observations forwarded, it occured to us that the Catholic vote might make a great difference this year, but we hadn’t seen much about that yet in the MSM.

This morning I am in receipt of this from the "Hell’s Bible", as one bishop I know calls it, the NYT.  My emphases and comments. 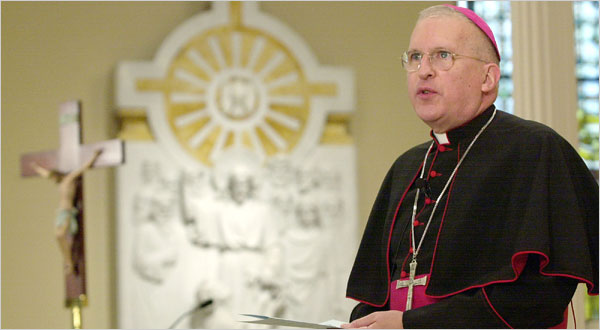 As the Roman Catholic Church observes its annual “respect life” Sunday in this heated presidential election season, the unusually pitched competition for Catholic voters is setting off a round of skirmishes over how to apply the church’s teachings not only on abortion but also on the war in Iraq, immigration and racism.

In a departure from previous elections, Democrats and liberal Catholic groups are waging a fight within the church, arguing that the Democratic Party better reflects the full spectrum of church teachings. ["reflects better the full spectrum"… get that?  That is the old "seamless garment" approach.  What this seeks to do is diminish the foundational issues of human life.]

It is a contest for credibility among observant Catholics, with each faction describing itself as a defender of “life.” The two sides disagree over how to address the “intrinsic evil” of abortion.   [If it is an "intrinsic" evil then it should be clear that it must be addressed in a manner quite different from the treatment of evils that are evil due to circumstances.]

The escalating efforts by more-liberal Catholics are provoking a vigorous backlash from some bishops and the right.  [I deny this premise.  This is not a "right" or "left" thing, this is not a matter of those who are interested "social justice" issues.  This is a matter of human life.  So, I deny the premise.]

In Scranton, Pa., every Catholic attending Mass this weekend will hear a special homily about the election next month: Bishop Joseph Martino has ordered every priest in the diocese to read a letter warning that voting for a supporter of abortion rights amounts to endorsing “homicide.”  [Perhaps "infanticide" might be better, but okay.]

“Being ‘right’ on taxes, education, health care, immigration and the economy fails to make up for the error of disregarding the value of a human life,” the bishop wrote. “It is a tragic irony that ‘pro-choice’ candidates have come to support homicide — the gravest injustice a society can tolerate — in the name of ‘social justice.’ ”

In response, a coalition of liberal lay Catholics is pushing back, criticizing the bishop’s message for neglecting other aspects of “life” talked about in Catholic social teachings, like concern for the poor.  [I deny the premise again.  Defense of life will create a better foundation for all the other social issues.]

To underscore the point, a nun is collecting the signatures of prominent Catholic leaders there for a newspaper advertisement [This reminds me of those Catholics who signed a NYT against Humanae vitae.] reminding those who may be wary of voting for Senator Barack Obama of Illinois, the Democratic nominee for president, that the church also considers racism a sin that threatens the dignity of life.  [OH. WHAT. A. SLIMEY. TACTIC.]

“Here in Scranton, racist attitudes often prevent us from seeing all of our fellow citizens and candidates for public office as God’s children,” says the petition, circulated by Sister Margaret P. Gannon, a professor at Marywood University.  [All this does is obfuscate the real issues.  And if we really think about it, the problems people in Scranton might have with Sen. Obama are not going to be about race, but with his comments about people in that area who cling to their guns and religion.  But the racism card is a really low blow.]

Scranton, the focus of a disproportionate amount of attention because it was the childhood home of Senator Joseph R. Biden Jr. of Delaware, the Democratic vice-presidential candidate, has become a flashpoint in the battle playing out nationwide in weekly homilies, pastoral letters and diocesan newspapers. Scranton is also one of several heavily Catholic, working-class cities in swing states — like Cincinnati; Cleveland; Detroit; Erie, Pa.; Pittsburgh; and St. Louis — where a new network of liberal groups like Catholics in Alliance for the Common Good and Catholics United are trying to promote the church’s social justice teachings.  [Makes them sound like scrappy insurgent freedom fighters.]

Catholics make up about a quarter of the electorate nationwide and about a third in many of the most heavily contested states in the Northeast and Midwest, an increasingly central focus of both presidential campaigns.  [This, friends, is why bishops and priests MUST SPEAK UP and ACT.]

The campaign of Senator John McCain of Arizona has dispatched high-profile surrogates like Senator Sam Brownback, Republican of Kansas, to remind Catholic audiences of the Republican candidate’s opposition to abortion.

For Mr. Obama, who supports the right to abortion, [Not just abortion.  Remember the whole thing about denying support to children who survive abortions so that they die.] his campaign has trained its grass-roots organizers in the details of recent policy statements of the Bishops Conference.

Conservatives argue that ending legal protections for abortion outweighs almost all other issues, [almost?] while liberals contend that social programs can more effectively reduce the abortion rate than trying to overturn Supreme Court precedents. [B as in B.  S as in S.  They are seriously arguing that social programs to "reduce poverty", or distributing contraceptives and abortifacients to teens will lower the abortion rate?] They cite a 2007 statement from the United States bishops explicitly condoning a vote for a candidate who supports abortion rights if the vote was cast for other “grave” reasons.  [That was then and this is now.  Also, I wonder what they are actually citing.  Are they citing what the Holy See passed on through the USCCB or are they citing Card. MCarrick’s enverating spin?]

The subtleties can be slippery. [No. I deny the premise.  This really isn’t all that hard.  Sure there are some situations where you have two candidates who both support abortion, but one might place no restrictions and one would.]  The Cathedral of St. Peter in Wilmington, Del., where Mr. Biden lives, is promoting a video produced by the conservative Catholic group Fidelis that is intended to persuade Catholic voters to put opposition to abortion rights and same-sex marriage above all other issues.  Sounds good to me.

“Many issues are at stake,” a caption reads as the video displays a fetus and choral music swells. “Some are more important than others.”  [So… liberals can make their issue dramatic, but not the pro-life supporters?]

Brian Burch, president of Fidelis, said the group had created the video as “a voter guide for the 21st century.” Many Catholic churches across the country have put it on their Web sites, and Mr. Burch said some statewide advocacy groups had been distributing it to their members.

At the Cathedral of St. Peter, the Rev. Joseph Cocucci has displayed the video prominently on the church’s Web page, and at each Mass he is urging parishioners to view it. Father Cocucci noted that the video also features smaller visual references to Catholics carrying peace signs and marching for civil rights.

“The video does say life is the most important issue, but if you notice it isn’t only abortion,” he said.

In the final push to Election Day, the intrachurch election debate is increasingly spilling into public view.

Last week, The St. Louis Post-Dispatch reported that the head of the A.F.L.-C.I.O. in Missouri had stormed out of a Mass because his priest had invoked Hitler’s name in condemning Democratic support for abortion rights. The Cincinnati Enquirer published a column commending several archbishops for instructing Catholics not to vote for supporters of abortion rights but lamenting that the archbishop there had not done the same.  [That would be the Archbishop of Cincinatti.]

In the aftermath of the 2004 election, many liberal Catholics complained that parishes had distributed millions of copies of a voter guide created by a group called Catholic Answers that highlighted five “nonnegotiable” issues: abortion, stem-cell research, human cloning, euthanasia and same-sex marriage.

Then the Bishops Conference, perhaps to forestall a blizzard of competing pamphlets, all but banned third-party voter guides from parishes, requiring the explicit endorsement of the presiding bishop.  [And that is … what… wrong to do?  Would that bishops had exercised such vigilance over printed materials for Catholics in the last few decades.]

But some, including the bishop of La Crosse in Wisconsin, [Bp. Jerome Listecki] a swing state, have nevertheless chosen to authorize distribution of the “nonnegotiable” guides this year. [Don’t you love that "nevertheless" in there?  How it changes the tenor the sentence?] The liberal groups are trying to distribute their material through direct mail and at meetings of lay Catholic groups.

Alexia Kelley, executive director of Catholics in Alliance, said her organization was spending more than $250,000 on radio, print and billboard advertisements in Scranton and other heavily Catholic areas. The advertisements emphasize what Ms. Kelley described as the broader spectrum of Catholic concerns about the “common good,” including health care, jobs and home foreclosures.  [Remember… "broader spectrum" is code language.]

Douglas W. Kmiec, a Catholic legal scholar who was a legal counsel in the administrations of President Ronald Reagan and the first President George Bush, has been telling Catholic audiences in Pennsylvania and other swing states that Mr. Obama’s platform better fits Catholic social teaching, including reducing the abortion rate.  [Which is, of course, not true.  Those things will not in themselves reduce the rate of abortion.  And even if they did, that doesn’t make any difference for this issue.  If abortion is intrinsically evil, then we must not support it.  If it is more fundamental than other issues, then it must have priority in our weighing of the candidates.]

Mr. Kmiec, who recently published a book on the subject — “Can a Catholic Support Him? Asking the Big Question about Barack Obama” — was speaking in Scranton last week when Bishop Martino issued his letter rebutting those arguments.

Asked how his former Republican colleagues were responding to his Obama evangelism, Mr. Kmiec acknowledged some resistance. “Some remind me that George Washington gave orders for Benedict Arnold to be shot on sight,” he said.