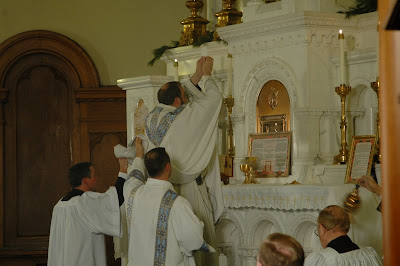 In the Washington Times today there is an interesting article.

Remember: I posted about this here and here.

An unusual Mass, with all the stops pulled out, was celebrated Monday at Mount St. Mary’s Seminary in Emmitsburg.

At least it was unusual for the seminary’s 150 students who, for the first time in four decades, got to take part in a Tridentine Mass rite involving incense, ornate vestments, a sung liturgy in Latin and a supporting cast of several priests.

Chantry, a Renaissance church music choir from the District, [of Columbia, I suppose…] did the chants and polyphony. Several clergy made the 90-minute drive to take part, including the celebrant, who was Monsignor Charles Pope, coordinator of the Latin Mass for the Archdiocese of Washington. The Rev. Paul Scalia, a priest in the Arlington Diocese, was the deacon and the Rev. John Fritz, a Rockford, Ill., priest studying at Catholic University and a graduate of "the Mount," was the subdeacon.

The 58-year-old rector said he had grown up with the Mass, "but the vast majority of parishes have never experienced Mass like this as most church choirs are not able to do this kind of music."  [Remember that Card. Castrillon said that the old form of Mass should be offered in all parishes so that people have the chance to experience it.]

The 16th century Tridentine Mass was the church’s official rite until it was phased out after Vatican II, which ended in 1965. On July 7, 2007, Pope Benedict XVI restored its use, [Well…. not quite.  Paul VI never abrogated it and even in his pontificate it was still used under indult.  John Paul II expanded its use under indult.  Benedict XVI changed the entire game by making sure every priest has faculties to say it and described the rights of priests and lay people to have it.] ordering bishops in a letter called "Summorum Pontificum" to make it more accessible to the faithful. At the time, one-third of 195 U.S. dioceses had no Latin Mass at all and there was only a handful in four dioceses stretching from Richmond to Baltimore.

Since then, interest has shot up worldwide, especially among young Catholics seeking a more transcendent worship. [Exactly.  Young people are less interested in the horizontal, the immanent in worship and more interested in the real point of worship: mystery.] Locally, the Basilica of the Shrine of the Immaculate Conception has set aside one of its crypt-level chapels for the rite. Last spring, students at Georgetown University petitioned to get the Mass offered twice weekly in a small chapel.

In September, 15 mostly young Archdiocese of Washington priests attended a three-day workshop in LaPlata, Md., on how to stage such a Mass. Monsignor Pope said some already have begun doing the Mass on their own.

"There is a beauty to the old liturgy if it’s done well," he said. "This is the Mass that most of the canonized saints knew."  [This is a good point.  I think it must be made clear to people that the older form of Mass doesn’t need a defense on this point.  It nourished the lives of saints.  The older form of Mass can be known from its fruits.  On the other hand, it is too early to see what the fruits of the Novus Ordo are.  The jury is still out, as it were.]

Opportunities to take part in the Latin rite have "slightly increased" in the archdiocese, he said, but "frankly, there haven’t been huge requests from the laity."  [Time will tell.]

There might be if there were more priests offering it, which is why Mount St. Mary’s required all students be present at Monday’s event. Currently, 20 seminarians are undergoing two years of course work on how to do the Mass.  [I am not sure it takes two years, but GREAT!]

"First, we make sure they know sufficient Latin," [useful for far more than just Holy Mass, of course] Monsignor Rohlfs said. Most of the seminarians prefer the English-language rite used in parishes today, "but they need to appreciate the extraordinary [Latin] form of the Mass.  [And be able to use it.  After all Canon Law requires that seminarians be trained in Latin and Latin Rite priests should know how to celebrate their own rite in their own language… which includes Latin.]The pope wants seminarians and priests to make the Mass available to people."

But it’s a learned habit.  [In the common sense of the word, all habits are learned.]

"I’ve found the first time you do it, the church is full," he said. "The second time, it is half full, the third time it is one-quarter full and eventually you get to about 75 people who like that form of worship and want to stay with that." [Maybe so, but in that is what happened to the Lord John 6.]

Fr. Z is the guy who runs this blog. o{]:¬)
View all posts by Fr. John Zuhlsdorf →
This entry was posted in Brick by Brick, SUMMORUM PONTIFICUM. Bookmark the permalink.