QUAERITUR: substituting for a subdeacon 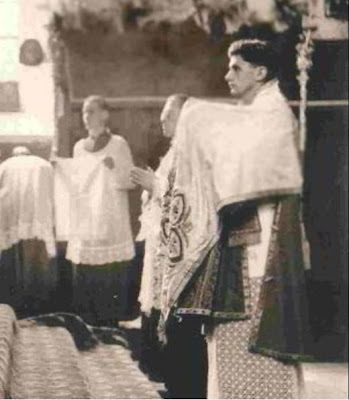 From a seminarian reader, rewritten for anonymity:

I was told that having a layman (including a seminarian/acolyte) serve as a sub-deacon constitutes an abuse. Sed contra, the FSSP regularly has seminarian sub-deacons. Do you know of any official documents which address this question?

The points of the argument you need to know are these.  First, it was in the past always possible for a cleric in minor orders or a man who was at least tonsured to substitute for a subdeacon.  In that case the rubrics changed a bit, for there were things he couldn’t do.

In the past, even though the rubrics assumed that those serving in all roles in the sanctuary were tonsured clerics, the non-tonsured, non-cleric substituted for altar servers in the natural course of things.  So it is today.  So it is that non-acolytes and non-lectors substitute for those installed ministries now.

It seems to me that what could be done in the past is reasonable to do now.

Moreover, the Pontifical Commission "Ecclesia Dei" once responded to a question posed by the Australian Ecclesia Dei Society in the early nineties about this very issued.  The PCED said then that, yes, an officially installed acolyte could take the role of the subdeacon in a Solemn Mass if a cleric wasn’t there to take the role.  I am sure that the PCED would reiterate that now were a dubium offered at that office.  He would have to be an installed acolyte.  He would not wear a maniple.  He would not wipe the chalice after the ablusions, etc.  The reference for this PCED letter is 7 June 1993, Prot. 24/92 to the Australian Ecclesia Dei Society.

An officially installed acolyte can substitute for the subdeacon… especially because there really aren’t any true subdeacons around anymore.  The clerical state begins with diaconate now, no matter what is done in the traditional groups.

Based on the above, I think it is wrong to say that a non-cleric substituting for an absent subdeacon in a solemn TLM is an "abuse".  It is not the ideal, but it wasn’t an abuse in the past.  It is not an abuse now.  Someone who says it is an abuse should produce his own documentation saying that it is.

In the meantime, the PCED had and has competence in this matter.

In a seminary setting, however, there ought to be quite a few available installed acolytes and, better yet, ordained deacons.  Priests and deacons can take those roles.  Why not have a deacon take that role if this is a problem for the faculty?  Get some work out the deacons for a change!  o{];¬)

For notes and documentation, you need to 1983 Code, Ministeria quaedam, and you can get help from the new (and older) edition of Fortescue-O’Connell edited by Reid.

Fr. Z is the guy who runs this blog. o{]:¬)
View all posts by Fr. John Zuhlsdorf →
This entry was posted in "How To..." - Practical Notes, ASK FATHER Question Box, Classic Posts, SESSIUNCULA and tagged Solemn Mass, subdeacon, TLM. Bookmark the permalink.