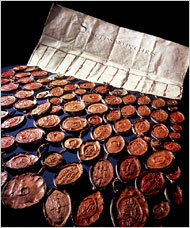 May 12, 2009, 11:42 am
Vatican Reveals Letter That Split England From Roman Church
By ELISABETTA POVOLEDO

The Vatican has opened its Secret Archives, the repository of centuries worth of documents pertaining to the Holy See, to let the world get a closer look at a document presaging England’s split from the Church of Rome. Dated July 13, 1530 and addressed to Pope Clement VII, the letter asks for the annulment of Henry’s marriage to Catherine of Aragon and includes the seals of dozens of peers of England who concurred with the request. A facsimile of the document will go on sale next month for about $68,000 [gadzooks!]  from Venice-based publisher Scrinium,  which plans a limited run of 199 copies. A second, more damaged, copy of the document is in England’s National Archives in Kew. The facsimile and accompanying scholarly texts will allow for closer perusal of “the cause of Henry VIII,” Monsignor Sergio Pagano, the archive’s Prefect, told journalists on Tuesday. It will be officially presented in June, on the occasion of the 500th anniversary of Henry’s coronation, but the timing is a coincidence, Monsignor Pagano said. “We do not celebrate kings, only popes.”  [Especially that king.]

I have been watching The Tudors.  For the most part it is pretty good.  There are objectionable scenes: big surprise there.  I have been amazed all along at the relatively friendly portrayal of the Catholic cause and the horror of the repression of the Church.

All that aside… think of it.  Think of what an interesting historic document that letter is.  Fascinating.

Fr. Z is the guy who runs this blog. o{]:¬)
View all posts by Fr. John Zuhlsdorf →
This entry was posted in Just Too Cool. Bookmark the permalink.