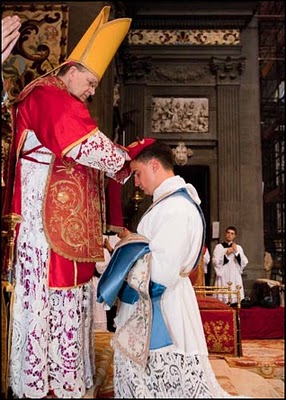 I realize this must be a sensitive topic for anyone especially a priest ordained after 1969 but please know we are just seeking an objective answer. We have done our "homework" on this but who can we ask? There are very few places where we would actually get a straight answer.

We just came across documents and information this last weekend August 8th 2010 and before getting crazy thought we would email a few priests we know as well as you because we value your opinion on Catholic issues. Our faith is the most important part of our lives, please do not be mistaken – we are not kooks – but we would like an objective answer not skewed one way or the other because of a priests background. we could ask the SSPX priests all day and know their answer already but would like to hear this from someone we trust.

Plainly answered, YES, those ordained in the normal way with the post-Conciliar rites of ordination are validly ordained.

People who say they aren’t are deeply confused and dead wrong.

For a good book which criticizes the post-Conciliar rite of ordination, but comes down on the correct side when he gets to the bottom line, look at Michael Davies book Order of Melchisedech: Defence of the Catholic Priesthood.

The general line of the book is that the ordination rites after the Council were compromised because they did not adequately express explicitly what the Church says a priest is and what a priest does.   What saves the rite is the knowledge the bishop has of what the rite means.   Davies says that were the bishop to have an insufficient understanding of the Church’s teaching on priesthood, then there would be trouble.   But we are not to that point.

Furthermore, the book of the rites of ordination was redone by Pope John Paul II in 1990. He put back into the rite some explicit language which helps to clarify what is being done.

In any event, a Pope is not going to promulgate and then use an invalid rite of ordinations of priests and bishops.

Fr. Z is the guy who runs this blog. o{]:¬)
View all posts by Fr. John Zuhlsdorf →
This entry was posted in ASK FATHER Question Box and tagged Michael Davies, ordination, priesthood. Bookmark the permalink.