QUAERITUR: “You are absolved of your sins” instead of “I absolve you”. 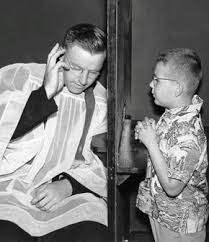 My confessor said: “you are absolved of your sins” instead of “I absolve you of your sins.” I searched the web and your blog and found nothing similar to this example. Confession still valid or do I re-confess? Thanks!

Yet another priest lacks the wits simply to say the formula of absolution as the Church has prescribed.

What really burns me about this is that that priest left you in doubt about your state.  I think that is one of the cruelest things a priest can do: leave someone in doubt about the validity of a sacrament.

Let us stipulate that priests are busy guys. Some things they do, however, are more important than others.  Priests are not ordained for organizing canned goods drives, going to a shut-in outreach committee meeting, or talking to the contractor about tuck-pointing. Yes, those things are important, but in a lesser sphere of importance.  The priest is ordained to say Mass and forgive sins.  Anyone can do the other things.  Only priests can say Mass and forgive sins.  So, when called upon to do the two things they are indispensible for, perhaps priests ought to try to get them right.  No?  Am I wrong?

Honestly, what’s with these guys? If they can’t get such a simple thing as this right, then maybe they shouldn’t permitted to drive a car or use a credit card.

I will preface this with I could be wrong, but it seems to me that the words of absolution Father Chucklehead said are of doubtful validity.

Of course we can argue that in the Gospels Christ Himself in Luke 5 says “Man, your sins are forgiven you.” (RSV) But that is the Lord.  Instead, Father Chucklehead acts in persona Christi as he administers the sacrament.  Father Chucklehead, not being the Lord Himself, is bound to do so as the Church determines.  Christ gave His power and authority to the Church to determine how the sacraments He instituted were to be celebrated and administered. Holy Church has determined that the formula for absolution, spoken by the priest, is “X” and not “Y”.  What he said is related to the content of the form of absolution, but it wasn’t the actual act of absolving as the Latin Church has determined it to be.

Because we like to be Unreconstructed Ossified Manualists from time to time, we also check the old reliable manuals of theology. In Ott, for example, we reaffirm our memory that the Council of Trent clarified that the absolution of sins doesn’t merely indicate the forgiveness of sins, but it also effects it.  The formula is not supposed to be declaratory, as if it is a confirmation of the penitent’s contrition which brought about justification.  The form of the sacrament signifies the sacramental effect, that is, the removal of the guilt of the sins.  In other words, absolution absolves.  Absolution doesn’t just describe that you were absolved.

We also know from our manuals that the essential words in the formula are “Ego te absolvo a peccatis tuis“.  Some authors suggest that “tuis” could be omitted, because the “te” is there.  The other words of the formula can be omitted for a good reason though, in any event, the omission doesn’t invalidate the absolution.  What Father Chucklehead did was change the essential words in such a way that they produced a different concept, they produced a declaratory concept, rather than an actual act of absolution.

Let us leave aside the point that the words can be changed, validly, for the sake of absolving more than one person in an emergency (which the Church permits and provides for).

So, ut brevis, if I were in your shoes (and keep in mind that at hearing the odd words I would insist that the confessor say them properly and even say “Repeat after me…” even if I had to reach through the screen and twist the stole around his neck … but a layman should never be so temerarious as to do something that aggressive… ehvvv-errrr… ), I would at your earliest convenience go to confession.  Begin your confession with the brief statement that the last guy changed the words of absolution to such a degree that you were left in a doubt about the absolution.  Then confess what you have to confess.  The statement up front should let the priest know that he shouldn’t play fast and loose with the formula.  Hopefully, even if he is some ad libbing lib, the three brains cells left to him will conspire to make him read the proper form from a card if necessary.

The combox is closed.

Fr. Z is the guy who runs this blog. o{]:¬)
View all posts by Fr. John Zuhlsdorf →
This entry was posted in "How To..." - Practical Notes, ASK FATHER Question Box, GO TO CONFESSION, Liturgy Science Theatre 3000 and tagged confession, formula absolutionis, reconciliation, sacrament of penance, words of absolution. Bookmark the permalink.