REVIEW: Manual of Minor Exorcisms – For the use of Priests (Catholic Truth Society) 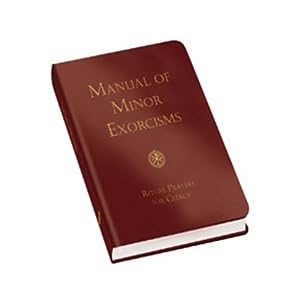 I recently received from the UK-based Catholic Truth Society, a copy of their Manual of Minor Exorcisms – For the use of Priests.

And excellent.. excellent… gift for a priest or a transitional deacon about to be ordained (less so for early seminarians and never for lay people, in my opinion).

The book is small, inside suit coat pocket small, with a ribbon. It was put together in 2010 by Bp. Julian Porteous, auxiliary of Sydney, and is just being released now.

There is a great introduction including a section on

The body of the book contains rites and prayers.  Virtually everything in the book can be used only by priests, though there are a couple prayers that lay people can use.

Before you ask, yes, this book also contains rites and prayers from the older Rituale Romanum!

I was ready to stomp all over this book, until I saw that things from the traditional Rituale Romanum were included, though in English, not in Latin.

The introduction by Bp. Porteous is very good.  He actually believes in the powers of hell and that the devil hates us and that they work for our down fall and that the church and her ministers can do something about it.

I want to caution people, just as Bp. Porteous does in the intro, that there is a rise of prurient interest in dark things, which are often in the media protrayed in a seductively romantic way, that is, an attractive way.  This can lead people into the trap of believing a) that these things are really good when they are not, for there has been a long-standing effort to twist what has always been known to be evil into being at least ambiguous if not just another way of being “good”, and b) attracting the attention of the enemy by too much interest in these dark things.

Never forget that the enemy is angelic.  They are fallen angels.  The angelic nature is vastly more powerful than our puny little human nature, even though Our Lord took our nature to His.  Angels are absolute in their goals and relentless in their actions.  They can influence our memory and our appetites, though they cannot control our wills.  They watch us ceaselessly and, with their superior intellects which don’t need to divide and compose, know us in many ways better than we know ourselves.  And the fallen angels, the enemy, hate us hate us hate us and work constantly to help us sin and lose the life of grace in the soul.

Holy Church has Christ’s power to do something about the more serious forms of temptations, obsessions, oppressions, and possessions (as if there were any other kind than serious!), though her ordained priests and bishops and by using rites of deliverance of different levels.

Priests need to know this stuff. Unfortunately, I never heard that any of this is being taught in any seminary anywhere. I could be wrong. I haven’t heard about it.  There are occasionally courses and workshops offered.

Lay people: Develop a healthy fear of this stuff, even as you recognize the gift of the priesthood and Christ’s gift of His own authority to Holy Church.  Use sacramentals.  GO TO CONFESSION.  Make good Communions.  Ask for the priest’s blessing when you meet him.

Fr. Z is the guy who runs this blog. o{]:¬)
View all posts by Fr. John Zuhlsdorf →
This entry was posted in "How To..." - Practical Notes, Brick by Brick, Four Last Things, Liturgy Science Theatre 3000, Our Catholic Identity, Priests and Priesthood, REVIEWS, The Drill and tagged exorcism, fallen angels, Manual of Minor Exorcisms, The Devil, the enemy of the soul. Bookmark the permalink.