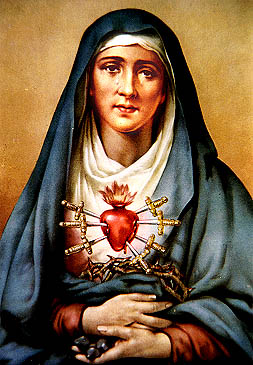 From the UK’s best Catholic weekly, the Catholic Herald, comes this from William Oddie.

Our Lady of Quito prophesied that in the 60s there would be spiritual catastrophe in the Church; then, through the faith of the just, a ‘complete restoration’

But first, there would be a total corruption of morals in society; this would affect the Church, too

Early in the morning of January 21, 1610, the Archangels St. Michael, St. Gabriel and St. Raphael appeared to Mother Mariana. Then Our Lady appeared to her and predicted many things about our own times: this is part of what Mother Mariana afterwards related that she told her:

“…. I make it known to you that from the end of the 19th century and shortly after the middle of the 20th century…. the passions will erupt and there will be a total corruption of customs (morals)….

“They will focus principally on the children in order to sustain this general corruption. Woe to the children of these times! It will be difficult to receive the Sacrament of Baptism, and also that of Confirmation…

“As for the Sacrament of Matrimony… it will be attacked and deeply profaned… The Catholic spirit will rapidly decay; the precious light of the Faith will gradually be extinguished… Added to this will be the effects of secular education, which will be one reason for the dearth of priestly and religious vocations.

“The Sacrament of Holy Orders will be ridiculed, oppressed, and despised… The Devil will try to persecute the ministers of the Lord in every possible way; he will labor with cruel and subtle astuteness to deviate them from the spirit of their vocation and will corrupt many of them. These depraved priests, who will scandalize the Christian people, will make the hatred of bad Catholics and the enemies of the Roman Catholic and Apostolic Church fall upon all priests…

“Further, in these unhappy times, there will be unbridled luxury, which will ensnare the rest into sin and conquer innumerable frivolous souls, who will be lost. Innocence will almost no longer be found in children, nor modesty in women. In this supreme moment of need of the Church, the one who should speak will fall silent.”

In a subsequent apparition, Our Lady told Mother Mariana that these apparitions were not to become generally known until the twentieth century.

The most important thing to understand is that it would be just wrong to despair at all this. The fightback is underway. For, in the end, Our Lady of Quito’s prophecies do not end with spiritual catastrophe. In a later apparition she foretold that “In order to free men from bondage to these heresies, those whom the merciful love of My Most Holy Son will destine for that restoration will need great strength of will, constancy, valor and much confidence in God. To test this faith and confidence of the just, there will be occasions when everything will seem to be lost and paralyzed. This, then, will be the happy beginning of the complete restoration.”

I believe we have seen that faith and valour over the last half century, above all in the present Holy Father and his heroic predecessor; and that that complete restoration has indeed happily begun.

Fr. Z is the guy who runs this blog. o{]:¬)
View all posts by Fr. John Zuhlsdorf →
This entry was posted in Benedict XVI, Brick by Brick, Global Killer Asteroid Questions, New Evangelization, Our Catholic Identity, Priests and Priesthood, The Drill, The future and our choices, Year of Faith and tagged Catholic Herald, New Evangelization, Our Lady of Quito, Pope Benedict XVI, Wm. Oddie. Bookmark the permalink.