Bp. Blair about the LCWR 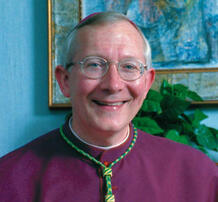 You will recall that Sr. Pat Farrell, President of the Leadership Conference of Women Religious (a subsidiary of the Magisterium of Nuns) was interviewed on the liberal radio network NPR.  NPR followed up with an interview of one of the bishops who are overseeing the overhauling of the LCWR, His Excellency Most Rev. Leonard Blair, Bishop of Toledo, Ohio.

In the interview, which you can hear at the site of NPR, HERE.

BISHOP LEONARD BLAIR: Well, I think it is very striking when it’s very clear to everyone inside and outside the church that the dignity – the threats to the dignity and rights of the human person from conception until natural death is so much under attack. And we’re – you know, even popes like Pope John Paul have talked about it as one of the great moral issues of our time.

And the church has been so strong in defending that right to life, you know, it seems that one would expect the Leadership Conference of Women Religious to stand up and be counted in upholding this right and working for its defense.

And the reality is that there’s nothing really said by the Leadership Conference on this issue. They have had statements on things like human trafficking and immigration, which are wonderful things, you know. Those kind of things should be addressed. They’ve had statements on ecology and climate change, militarization of space, nuclear weapons, but nothing on the issue of abortion and the importance of upholding the right to life.  [Exactly.]

On the LCWR not taking a hard-line stance on abortion

“I recall something that Pope John Paul II said: He said that all other human rights are false and illusory. If the right to life, the most basic and fundamental right and condition of all personal rights, is not defended with maximum determination … to relativize or say, well the right to life of an unborn child is a preoccupation with fetuses [Which is what the LCWR types do.] or [it is] relative in its importance, I cannot agree with that, and I don’t think that represents the church’s teaching and the focus of our energies in trying to deal with this great moral issue.”  [Abortion is NOT a women’s issue.  It is a human rights issue.]

“If by dialogue, they mean that the doctrines of the church are negotiable, and that the bishops represent one position and the LCWR represents another position and somehow we find a middle ground about basic church teaching on faith and morals, then no, I don’t think that’s the dialogue the Holy See would envision. But if it’s a dialogue about how to have the LCWR really educate and help the sisters appreciate and accept church teaching and to implement it in their discussions, and try to heal some of the questions or concerns they have about these issues, that would be the dialogue.”

BLAIR: Well, I think another great issue of our society today is the defense of the God-given institution of marriage between one man and one woman. And I think everybody knows this is at the front line of moral issues in our country today. And so what we would imagine happening for the organization of Catholic religious women would be that they would be front and center in speaking on behalf of this fundamental teaching. And yet we don’t find that.

And this raises another important point, I think, that no one is questioning the compassionate, pastoral care that has to be given to people – for example, people who have a homosexual inclination. And I think sometimes there’s a disservice done when it’s made to sound as if the church condemns homosexuals, and that is not the case.

The bishops in the United States have written a guide for pastoral care of people with a homosexual inclination. So we want to extend that care to everyone, and we want to treat everyone with dignity and respect. But that’s very different than insisting, then, on the claims of a gay lifestyle or gay culture and trying to undermine the institution of marriage.

And that’s something where I think Catholics would reasonably expect that a leadership group of women religious would, you know, subscribe to that and want to be part of that effort.

Fr. Z is the guy who runs this blog. o{]:¬)
View all posts by Fr. John Zuhlsdorf →
This entry was posted in Emanations from Penumbras, Linking Back, Magisterium of Nuns, One Man & One Woman, Our Catholic Identity, Women Religious and tagged Bp. Blair, LCWR, Leadership Conference of Women Religious, magisterium of nuns, Sr. Pat Farrell. Bookmark the permalink.