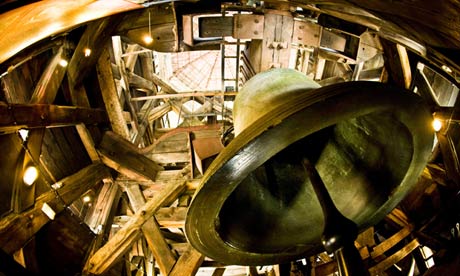 Notre Dame's famous Emmanuel bell - not one of those being replaced - rings in the south belltower of the Paris cathedral. Photograph: Peter Barritt/Alamy

Their names sound pretty enough – Angélique-Françoise, Antoinette-Charlotte, Hyacinthe-Jeanne and Denise-David – but the noise they make together has been described as “discordant” and enough to drive Quasimodo deaf all over again.

Some have gone as far as to call them cheap, old and ugly.

Thus, there were expected to be few tears shed when the four bells, whose tolling has marked the march of time and a funereal adieu for the great and good at Notre Dame cathedral for 156 years, were taken from their belfry and consigned to the scrapheap.

Made and hung in 1856 to replace those torn from the cathedral during the French Revolution and melted down to make cannon – a fate that befell 80% of France’s church bells at the time – they were, declared the French campanologist and music expert Hervé Gouriou, “one of the most dreadful sets of bells in France … damaged and badly tuned”.

To mark the cathedral’s 850th anniversary next year, a new set of eight bells, intended to recreate the sound of the 18th-century bells made famous by Victor Hugo’s fictional Hunchback of Notre Dame, are being struck at a foundry in Normandy.

Now, however, dozens of cultural associations from France and abroad and at least one religious group have been going like the proverbial clappers to stop the bells being destroyed.

Father Alain Hocquemiller, the prior of a religious community in Normandy, went as far as to bring in the bailiffs to serve a legal notice to save them. He claims he was prompted to act after learning of plans to declassify the bells and melt them down for scrap.

Under a law dating back to 1905, Notre Dame belongs to the French government, which gives the Catholic church the exclusive right to use it, so the bells, which weigh between 767kg and 1.91 tonnes each, belong to the state.

“I consulted a lawyer who told me it was the gratuitous destruction of France’s religious heritage and that’s not allowed by law,” Hocquemiller told reporters.

The four grandes dames are currently at the French bell foundry Cornille-Havard, which is making the new bells using medieval methods, including pouring bronze into moulds made from clay, horse manure and horsehair. They will be named after eight important figures in French history, with the design reflecting their namesakes.

Notre Dame’s great south tower bell, the 13-tonne Emmanuel installed in 1685 and widely considered the most remarkable in Europe – which rang for the coronation of kings and to mark the end of the two world wars – was cut down by revolutionaries, but escaped destruction and was rehung on the orders of the Emperor Napoleon in 1802.

“The bells are not for sale, not for destruction, not for melting down. On 2 February 2013 we will unveil eight new bells that will be blessed. Everything we have done has been in the open, nothing is hidden.”

He added: “This isn’t the first time the cathedral is the theatre for stories and fantasies, but given the choice, I prefer those of Victor Hugo.”

Did you that the blessing of a bell is not, traditionally, not like other blessings.  It is far more complex.  It is usually done by a bishop.  It is actually referred to as a “baptism”.  Bells are given names, like people. They speak with a voice.

Antiphon: Lord, let my prayer come like incense before you.

Then the celebrant continues:

O Christ, the almighty ruler, as you once calmed the storm at sea when awakened in the boat from the sleep of your human nature, so now come with your benign help to the needs of your people, and pour out on this bell the dew of the Holy Spirit. Whenever it rings may the enemy of the good take flight, the Christian people hear the call to faith, the empire of Satan be terrified, [Can you imagine a phrase like that in the dreadful, watered-down Book of Blessings?] your people be strengthened as they are called together in the Lord, and may the Holy Spirit be with them as He delighted to be with David when he played his harp. And as onetime thunder in the air frightened away a throng of enemies, while Samuel slew an unweaned lamb as a holocaust to the eternal King, so when the peal of this bell resounds in the clouds may a legion of angels stand watch over the assembly of your Church, the first-fruits of the faithful, and afford your ever-abiding protection to them in body and spirit. We ask this through you, Jesus Christ, who live and reign with God the Father, in the unity of the Holy Spirit, God, forever and ever.

If the bell is for a consecrated church, there is a Rite in the Roman Pontifical.

Also, here is something from the Catholic Encyclopedia:

In medieval England it was distinctly laid down that the church bells and ropes had to be provided at the cost of the parishioners. The canon law assumed that cathedral had five or more bells, a parish church two or three, while the churches of the medicant orders, like public oratories, were originally limited to one. The solemn ceremony of benediction provided in the Pontifical can only be carried out by a bishop or by a priest specially empowered, and it is only to be employed in the case of bells intended for church use. For other bells, a simpler blessing is provided in the “Rituale”. Numerous prohibitions exist against the church bells being used for “profane” purposes, e.g. for summoning meetings or for merely secular festivities and in particular for executions. In Catholic ecclesiastical legislation the principle is maintained that the control of the bells rests absolutely with the clergy. In cathedral churches according to the Cermoniale Episcoporum” this jurisdiction is vested in the Sacrista. Theoretically, the actual ringing of the bells should be performed by the ostiarius and in the conferring of this minor order the cleric is given a bell to ring, but for centuries past his functions have everywhere become obsolete, and lay bell-ringers have been almost exclusively employed. Finally, we may note a decision of the secular courts given in an action brought against the Redemptorists of Clapham, England, in 1851, whereby an injunction was granted to restrain these Fathers from ringing their bells at certain hours, at which, as it was complained, such ringing caused unreasonable annoyance to residents in the neighbourhood.