This may be a stupid question, but in the Novus Ordo, if a bishop of the diocese celebrates Mass, would it technically be defined as a “pontifical Mass” since he would be the pontiff?

Not a dumb-question at all.

Let’s get a term straight.  All bishops are “pontiffs” in the liturgical context.  A bishop need not be the ordinary of the diocese to celebrate “Pontifical Mass”.  An auxiliary, or retired, or visiting bishop would all celebrate “Pontifical Mass”, though they may not all be able to use the crozier or sit upon the local bishop’s throne or cathedra.

So, in a loose sense, any Mass celebrated by a bishop is a “pontifical Mass”.

However, “Pontifical Mass” is a technical term.

In the older, traditional Roman Rite there are different kinds of “Pontifical Mass”.

First, there is Pontifical Mass “at the throne”.  This is a solemn Mass sung by a cardinal (anywhere) or a bishop in his own diocese or an abbot at his abbey or elsewhere by permission of the local bishop.  It is quite elaborate and represents the summit of the Roman liturgy.  This is the paradigm for the Roman Rite, not the silent Low Mass of a priest, which most people think is the standard.

In such a Mass the pontiff/bishop is vested in his pontificalia, or “pontificals”, that is, the vestments and ornaments proper to a bishop.  These include the pectoral cross and ring, which bishops always wear no matter what, the miter and crozier, buskins (a kind of slipper), gloves, tunicle and dalmatic beneath the chasuble. 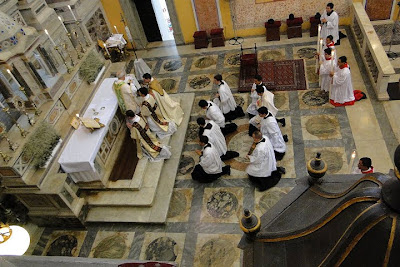 A little less fancy is the solemn Pontifical Mass “at the faldstool”, a special kind of chair that is placed in the sanctuary before the altar.  Most of the action takes place there and there are fewer sacred ministers.  This is now most bishops who aren’t the ordinary of the place celebrate Pontifical Mass.

There is also a slimmed-down variation of the more solemn Mass at the faldstool, a Pontifical Low Mass, which might be celebrated, with less solemnity, by a bishop who is conferring minor orders or ordaining. In this case he would use the miter and crozier and so forth. 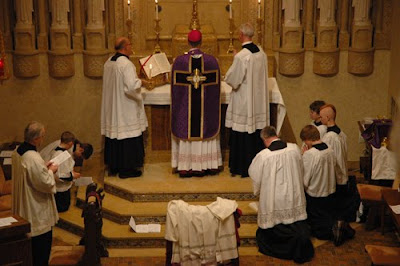 Finally, there is “Low Mass” of a bishop, which is slimmed down even more, though it retains some of the ceremonies of vesting before the altar, etc.  That isn’t really called a “Pontifical Mass” because the bishop isn’t vested in all his “pontificals”.

For the Novus Ordo… who knows?  Most of these distinctions and most of the pontificalia are gone.  The terminology of High Mass and Low Mass are gone for priests as well as for pontiffs.  “Pontifical Mass”, in the sense of the Novus Ordo Mass celebrated by a bishop, is barely more than that which a priest does.  I don’t believe the term “Pontifical Mass” made it into the Novus Ordo as a technical term.  I hope someone will chime in if I am wrong. According to the Ceremoniale Episcoporum there are still a few things done differently for a bishop’s Mass.  Bishops have to have servers around to take from them and give to them their hat and stick, for example.  They bless in a different way.  They kiss the book of the Gospel after someone else reads it.  But beyond that, there isn’t much that they do that is different.  It is all rather dumbed-down and listless. 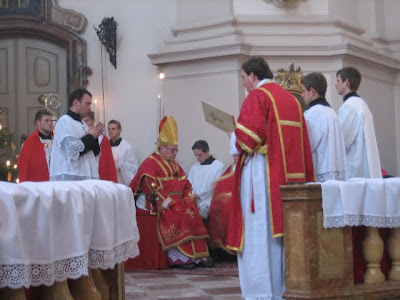 In any event, it is possible to celebrate the Novus Ordo with elements of the older, traditional form preserved.  You can make the Novus Ordo look and sound like the Roman Rite in its traditional form.  In a way it is easier to do so when a bishop is celebrating, because the Roman Rite’s standard is when a pontiff is pontificating.  We are inclined to “beef up” those Masses and our inclination is dead on right.

To track back to something I wrote above, the Solemn, Pontifical Mass of a Bishop at the throne in his own diocese is the true standard for the Roman Rite.  It is also, pace liberals, the standard for the Novus Ordo!

This is why Summorum Pontificum was so important, such a great gift to the whole Church.

We need wide-spread and frequent celebrations of the traditional form of the Roman Rite BY BISHOPS.

And now, by way of contrast, from the famous Pontifical TLM at the National Shrine of the Immaculate Conception, in 2010.

A reader (Polish?) sent this: