The key to increasing vocations 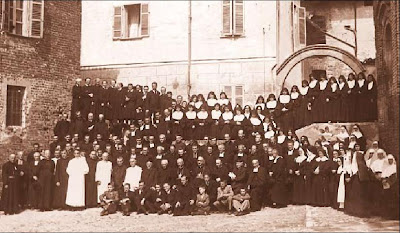 It seems to me that if we want to see an increase in vocations to the priesthood and religious life, we have to start praying more specifically about what we really want and about what we are willing to give.

For example, can we please stop lumping all vocations together?  Marriage is sliding down the hill towards the edge of the cliff, but lets not lump prayers for more and healthy true marriages together with vocations to the priesthood.  Pray for good marriages.  Prayer for priests.  Pray for religious.   Avoid generic “vocation” prayers.

Next, people must start praying that their own homes be the source of those vocations to the priesthood and religious life.  Don’t pray in a vague way that, somehow, men out there somewhere will respond to their call.

Parents and grandparents have to start praying, “God, take my son to be your good and holy priest”, “Lord, take my daughters to be your brides in the convent.”

This isn’t something that should concern someone else.  It has to concern us at home.

Yesterday I was talking with a friend here in Gotham about the numbers of men and women responding to a vocation to the priesthood or religious life. She mentioned a fascinating story of which I was unaware. HERE

“The little village of Lu, northern Italy, with only a few thousand inhabitants, is in a rural area 90 kilometres east of Turin. It would still be unknown to this day if, in the year 1881, the family others of Lu had not made a decision that had “serious consequences”. The deepest desire of many of these mothers was for one of their sons to become a priest or for a daughter to place her life completely in God’s service.

Under the direction of their parish priest, Msgr. Alessandro Canora, they gathered every Tuesday for adoration of the Blessed Sacrament, asking the Lord for vocations. They received Holy Communion on the first Sunday of every month with the same intention. After Mass, all the mothers prayed a particular prayer together imploring for vocations to the priesthood.

Through the trusting prayer of these mothers and the openness of the other parents, an atmosphere of deep joy and Christian piety developed in the families, making it much easier for the children to recognize their vocations.”

“Did the Lord not say, “Many are called, but few are chosen” (Mt 22:14)? In other words, many are called, but only a few respond to that call. No one expected that God would hear the prayers of these mothers in such an astounding way. From the tiny village of Lu came 323 vocations!: 152 priests (diocesan and religious), and 171 nuns belonging to 41 different congregations. As many as three or four vocations came from some of these families.

Some time ago I wrote about a prayer for vocations recited at my home parish in my native place. HERE I am convinced that that prayer was a major factor in the large number of vocations to the priesthood that came from that parish, especially during the tenure of its late pastor, Msgr. Richard Schuler.

A key to the effectiveness prayer is not only its entrusting of the petition to Mary, Queen of the Clergy, but also the petition that God choose His workers “from our homes“.

Vocations are where we live.  They are ours in a larger sense and we must own them.

Fr. Z is the guy who runs this blog. o{]:¬)
View all posts by Fr. John Zuhlsdorf →
This entry was posted in "How To..." - Practical Notes, Mail from priests, Our Catholic Identity, Priests and Priesthood, Seminarians and Seminaries, Women Religious and tagged 1881, prayer for vocations, vocations. Bookmark the permalink.