The analogy of the Church Militant as a spiritual field hospital is pretty good, provided that we remember that in field hospitals lots of people don’t make it.

We are like pilgrim soldiers in the Church Militant, on the march to our objective of salvation in the patria.  We are beset by enemies even from even within (the world, the flesh and the Devil).  The Church herself is beset by enemies even from within!  So, the march is hard.  We cannot take the smooth and easy roads, where ambushes await us in even greater numbers and severity.  Ours is the harrowing steep, narrow path.  Even there the Enemy is crafty and seemingly numberless.  We are going to take wounds along the way.  Some of them – those of our own doing – will be serious.

Nevertheless the Church does her best to help save those who come in.

So… GO TO CONFESSION!

In considering what it means to be the one to stop the spiritual bleeding of the soul who is gravely wounded by sin that would otherwise leave them “dead” before the Judge for the afterlife, I also sometimes think that it would be good to have some skills in stopping physical bleeding as well.  I’ve contemplated taking some EMT courses for this reason.  I’d like to be able to stop your bleeding, if necessary.

I’ll give you absolution first, however.  That’s the best first aid I can give.

We don’t know what the future looks like.  Right now, things are pretty cushy.  I doubt I am the only one who discerns dark clouds on the horizon.

I mentioned that I was trying to put together a little emergency triage “stop the bleeding” pack that would be easy to carry in a belt pouch or cargo pocket.  To that end I added some items to my wishlist (thanks to readers who helped out with that).  I think it would be good for people to have, for example in their car, a basic (or more than basic) first aid bag with elements that might address even serious bleeding.  For those of you who think along the same lines, I found an article that is useful at The Shooters Log, which I now share.  It addresses mainly the scenario of an accidental gunshot wound at the shooting range, but it is applicable to all sorts of situations. It makes suggestions for your own “Blow Out Kit”.

Think of patching a blown out tire… then consider that you can get punctured too.

However, there’s more to medical safety on the range than just having a first aid kit stuffed somewhere in your gear. The following four basic guidelines can assist you or your shooting club’s safety committee in assembling an effective, consistent plan for handling life-threatening emergencies.

Get Some Blowout Kits 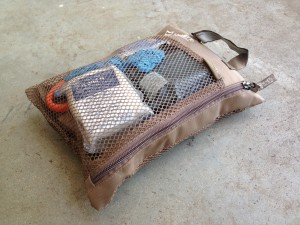 A blowout kit contains the essential first aid supplies to treat moderate to severe puncture and hemorrhage wounds in one easy-to-stow package. At a bare minimum, your blowout kits should include:

A well-equipped kit will normally contain other ancillary items, but that discussion is beyond the scope of this article, as is the usage of such. The primary takeaway from this point is that a properly assembled blowout kit doesn’t have to be expensive or complicated. Your main objective, in the case of a gunshot wound, is brutally simple: Stop the bleeding and plug the hole until paramedics can arrive.

Consider this, a life -preserving kit can cost less than a box of ammunition, and uses about the same amount of space. There’s no reason not to be prepared to save your own life or the life of those around you should the worst happen. And there’s no real excuse for not having two, three or more kits present at your gun club’s action shooting matches. [Or in your home… car… place of work…]

It’s not enough to just own a blowout kit or tourniquet, though. You’ve got to have the know-how to use these tools, which leads directly into our next point.

The piece goes on with the headings…

I am wondering aloud now, but …

…wouldn’t it be interesting were, at a parish, some guys and gals could network with some EMTs and medical docs and nurses for regular training sessions?

Picture if you will…

It’s the 3rd Sunday evening of the month.  At the parish, Confessions, Vespers and Benediction are followed by lessons in how to treat serious lacerations, puncture or gunshot wounds, choking, packing a wound, using a tourniquet properly, suturing, etc.

Body and soul, folks.  We have both.

Picture for a moment a loved one – or a stranger – bleeding out in front of your eyes and, with some preparation and practice, you might have been able to do something about it until help came… if there’s help coming.

What would be the spiritual equivalent of a Blow Out Kit?

Perhaps a good booklet or pamphlet with an Examination of Conscience?

So too should we picture the souls of our loved ones – or strangers – bleeding out because of mortal sins.  Should we pray for them and perhaps help them to the sacraments?  There are an awful lot of our brothers and sisters out there who are bleeding… right… now.

No sooner do I post this, but there flashes across my screen this horrible NEWS:

Fr. Z is the guy who runs this blog. o{]:¬)
View all posts by Fr. John Zuhlsdorf →
This entry was posted in GO TO CONFESSION, Semper Paratus, TEOTWAWKI, The Coming Storm, The future and our choices and tagged Blow Out Kit, Church Militant, confession, confessional, examination of conscience, preparedness, sacrament of penance. Bookmark the permalink.