Some news about your planet.

From the Jet Propulsion Laboratory: 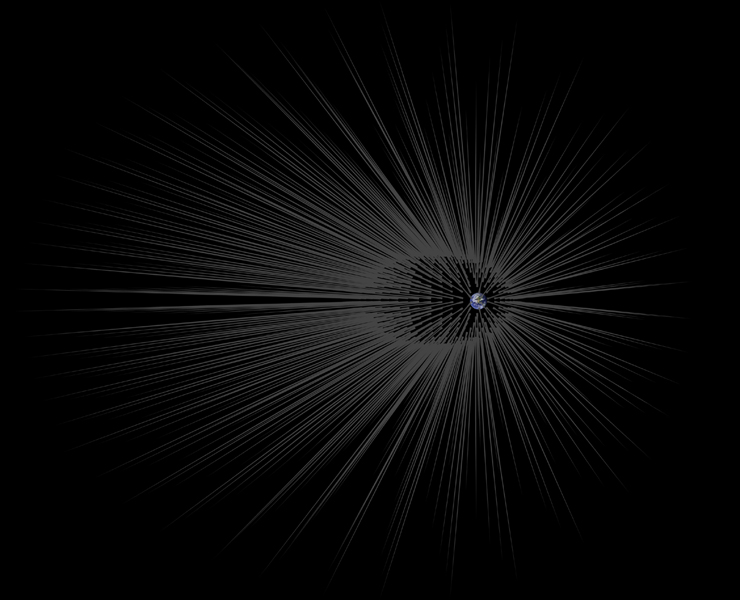 The solar system might be a lot hairier than we thought.

A new study publishing this week in the Astrophysical Journal by Gary Prézeau of NASA’s Jet Propulsion Laboratory, Pasadena, California, proposes the existence of long filaments of dark matter, or “hairs.”

Neither dark matter nor dark energy has ever been directly detected, although many experiments are trying to unlock the mysteries of dark matter, whether from deep underground or in space.

Based on many observations of its gravitational pull in action, scientists are certain that dark matter exists, and have measured how much of it there is in the universe to an accuracy of better than one percent. The leading theory is that dark matter is “cold,” meaning it doesn’t move around much, and it is “dark” insofar as it doesn’t produce or interact with light.

Galaxies, which contain stars made of ordinary matter, form because of fluctuations in the density of dark matter. Gravity acts as the glue that holds both the ordinary and dark matter together in galaxies.

According to calculations done in the 1990s and simulations performed in the last decade, dark matter forms “fine-grained streams” of particles that move at the same velocity and orbit galaxies such as ours.

“A stream can be much larger than the solar system itself, and there are many different streams crisscrossing our galactic neighborhood,” Prézeau said.

Prézeau likens the formation of fine-grained streams of dark matter to mixing chocolate and vanilla ice cream. Swirl a scoop of each together a few times and you get a mixed pattern, but you can still see the individual colors. [There are people who think this stuff up.]

“When gravity interacts with the cold dark matter gas during galaxy formation, all particles within a stream continue traveling at the same velocity,” Prézeau said.

But what happens when one of these streams approaches a planet such as Earth? Prézeau used computer simulations to find out.

His analysis finds that when a dark matter stream goes through a planet, the stream particles focus into an ultra-dense filament, or “hair,” of dark matter. In fact, there should be many such hairs sprouting from Earth.

A stream of ordinary matter would not go through Earth and out the other side. But from the point of view of dark matter, Earth is no obstacle. According to Prézeau’s simulations, Earth’s gravity would focus and bend the stream of dark matter particles into a narrow, dense hair.

Read the rest there.  They break it down Barney-style for us.

Fr. Z is the guy who runs this blog. o{]:¬)
View all posts by Fr. John Zuhlsdorf →
This entry was posted in Just Too Cool, Look! Up in the sky! and tagged dark matter, Jet Propulsion Laboratory. Bookmark the permalink.