ASK FATHER: Does a chalice have to be consecrated before use? questions:  [Usually I take one question at a time, but today I am feeling benevolent.]

1) It should be consecrated before hand, yes.  But if it is not, after it’s first use it will be by the very fact of its use at least sanctified, if not consecrated.  More on that later.

2) This is more properly a task for a bishop, but a priest can do it too.

4) This is not mentioned in the Code of Canon Law, but some directions can be found in the rubrics, which is a species of canon law.

I warmly recommend the use of the older form, by a bishop.  It is rich and inspiring in a way that the modern form… isn’t.   I wrote about that HERE and HERE.

Following the Novus Ordo, however, the chalice, paten, and ciborium are usually blessed at Mass, using the text in the Missal. I do not see a formula in the Missal for blessing the chalice or ciborium outside of Mass.

I hold to the argument that an unconsecrated chalice used for Mass may thereafter be considered sanctified but not consecrated. A chalice that is consecrated and then used for Mass is also sanctified. By consecration a chalice is formally, by special rites, set apart for a particular use.

“But Father! But Father!”, some of you are warbling. “This is just merciless nitpicking.  You are nitpicking merciless nitpicker!  You hate mercy and compassion and all those…. other things that Pope Francis talks about … like… the Earth’s climate and fairness and … and you hate Vatican II!”

We can grant that the sanctification which the chalice receives in its use at Mass could be the equivalent of consecration, but the special formal act is still lacking.  I think we have to make the distinction.

And, frankly, why not consecrate the chalice with the special rite that Holy Church provides?  Why not?

Thanks for asking about this.  It got me thinking.

I have been thinking that it is time to have my chalice regilded.  My 25th Jubilee is coming up.  After a quarter century of use, the chalice and paten made at the time of my ordination are worn down to the silver in some places.  Perhaps there is a reader out there who would like to help with this project… but I digress. Because we are Unreconstructed Ossified Manualists around here, let’s drill into this question of restoration and regilding.

Thus the question is raised:

Must a chalice be re-consecrated after it has been replated, reguilded, restored?

Think of it this way.  If you paint a church’s interior, you don’t have to reconsecrate it. As Lugo argues in De Sacramento Eucharistiae (Disp. 20. n. 95):

Most theologians took the negative position. 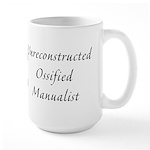 However, on 14 June 1845 the Congregation of Rites settled the issue. The question was asked:

I refer you now back to my earlier point that their use in Mass sanctifies but doesn’t consecrate them.  Consecration is something different, separate.

Then you have the situation of a chalice that needs to be reconstructed in some way, as in the case wherein the cup becomes separated, broken off, from the stem, or stem from the base, etc. I once had repaired a broken 19th century silver chalice with stamps of the Papal States.  I took it to my bishop for consecration with the older rite and he was happy to do it.

I would also say that if things are added to the chalice or it is altered in a major way, it should be reconsecrated.  For example, because St. Therese of Lisieux did something for me back in my bad seminary days, and I had a classic “sign of roses” that some people experience, I designed the chalice to have a wreath of roses at the top of the base.  However, the roses are actually places for small jewels to be set, but they remain to this day filled in.  I thought that, as some point, I would ask my mother to provide some small stones from her jewelry, which would be yet another a great way to keep her in mind during Mass.  (Yes, Fishwrapers, Fr. Z has a mother.  He wasn’t assembled from spare parts in a lab.)  And there are a few other small changes I would make.  In that case, I would have the chalice reconsecrated.

Similarly, if we do major work on an altar such that it is radically changed, or if the table becomes separated or broken in any way, then it has to be reconsecrated.

Let’s not be minimalists.  These gestures and rites mean something for our Catholic identity.

Fr. Z is the guy who runs this blog. o{]:¬)
View all posts by Fr. John Zuhlsdorf →
This entry was posted in "But Father! But Father!", "How To..." - Practical Notes, ASK FATHER Question Box, Hard-Identity Catholicism, Liturgy Science Theatre 3000 and tagged chalice, consecration, paten, Unreconstructed Ossified Manualist. Bookmark the permalink.