I received a couple questions about the Pope’s Mass for Easter.

From a reader (this was NOT in the Ask Father Question Box… I usually ignore questions that don’t come through that link):

Was the Pope’s Easter Mass on EWTN in Latin? Might have been Italian, but I recognized the phrases from the EF.

I didn’t watch it or pay any attention to the coverage.  However, yes, the Pope’s Vigil is generally in Latin.

Watching the Easter Vigil this evening we saw clergy dressed in blue cassocks with red cinctures. We have not seen this color cassock used other than in Marian rites. Do you know what they represented.

As I said, above, I didn’t watch it and I’m not going to, and I’m not sure what “Marian rites” would be, but I’ll bet you that they were not blue, but rather bluish purple cassocks and, with the red fascia, they were seminarians from the Scots College. 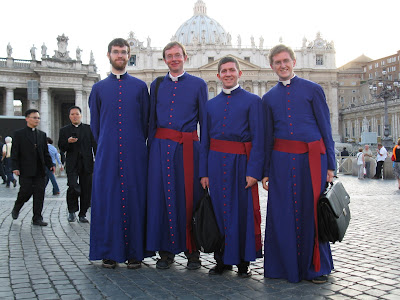 The different national colleges (where seminarians live) in Rome have distinctive cassocks.  The Polish wear black with a green sash, Ukrainian blue with yellow, Germans red with black, etc.

It would be great to see all these cassocks return to common use.  Roman streets in the mornings and afternoons would be a lot more colorful!

I found my old list of college cassocks, somewhat dated now and there are holes.  I’d appreciate corrections.

Note – the Soprana was a long sleeveless coat, often with two long strings or streamers hanging from the armholes to signify the state of tuition.

Fr. Z is the guy who runs this blog. o{]:¬)
View all posts by Fr. John Zuhlsdorf →
This entry was posted in ASK FATHER Question Box, Liturgy Science Theatre 3000 and tagged cassocks. Bookmark the permalink.