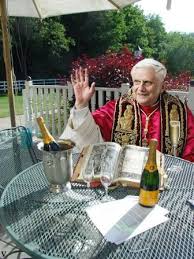 10 years ago, the official Parodohymnodist of this blog, inspired by the issuance of Benedict XVIs Motu Proprio Summorum Pontificum, penned and sent a celebratory tune.

I ruminated a bit  … and came to the realization that, while “La Donna e Mobile” might be readily appreciated and understood by those with an interest in the motu proprio, there’s also a need to reach out to those who might not be so appreciative and who, in general, tend to have different musical tastes. So, reaching back to the halcyon days of folk music and came up with a version of the Pete Seeger classic (made famous by the Byrds in 1965) :

Go to the altar (turn, turn, turn)
look to the East now, (turn, turn, turn)
there’s a time for every Mass now, if it’s valid.
The time for banjos and dancing is gone,
dust off the censer, and toss out the bong.
No need for hugging, we all get along
let’s keep our focus together, on Jesus.

Page through the Missal (turn, turn, turn)
remember the rubrics (turn, turn, turn)
there’s a time and a purpose for those words there Pure,
humble rev’rence is what we now lack,
just do the red words and say those in black.
When we say High Mass, there’s no need for crack,
just let your deacon and subdeacon guide you.

Now weed your library, (turn, turn, turn)
use some discernment (turn, turn, turn)
it is time now to brush up on your Latin.
Farewell to Vosko, McBrien, Hans Keung,
deep down you knew that they just peddled deung,
the 60’s are old and the Church is still young
what still subsists is a thing of great beauty.

5 years ago, the same Parodohymnodist, wrote another offering.

COMPOSER’S NOTE: To the Beatles’ “Maxwell’s Silver Hammer” – unfortunately, to fit the tune, you have to put the emphasis on the last syllable of “Summorum”, but it works.

Bishop John McClees, brand new to the diocese,
Plotted on his throne
How to make Father Prist use the
Novus Ordo-o-o

Down comes Summorum Pontificum
On that July dawn
Bang! Bang! With a motu proprio,
obstacles were gone!

Priests in Timbuktu, dusted off their Fortescue,
Liturgists were stunned,
Shaking like a nun with a
Tambourine,
e-e-ene.

“Mass is more profound, when the altar’s turned around,”
cries the NCR,
readers pop their Geritol,
and bemoan
o-o-oan

But Benedict’s got his Marshall Plan,
to reform the reform,

It’s spectacular, better than vernacular,
The Mass of ’62!
Offered now wherever a priest wants to,
Oo, oo, oo

Sweet polyphony, streaming from the balcony
While we pray as one,
not distracted by a guitarist’s
Solo-o o

Thanks for Summorum Pontificum
Now we’re five years on.
Bang! Bang! With a motu proprio,
Obstacles were gone!