Rereading “Lord Of The World” by Robert Hugh Benson – Brrrrr! I am once again – after many years – into the dystopian and prophetic Lord Of The World by Robert Hugh Benson.

“Briefly,” [Mr. Templeton] said, “there are three forces–Catholicism, Humanitarianism, and the Eastern religions. About the third I cannot prophesy, though I think the Sufis will be victorious. Anything may happen; Esotericism is making enormous strides–and that means Pantheism; and the blending of the Chinese and Japanese dynasties throws out all our calculations. But in Europe and America, there is no doubt that the struggle lies between the other two. We can neglect everything else. And, I think, if you wish me to say what I think, that, humanly speaking, Catholicism will decrease rapidly now. It is perfectly true that Protestantism is dead. Men do recognise at last that a supernatural Religion involves an absolute authority, and that Private Judgment in matters of faith is nothing else than the beginning of disintegration.

And it is also true that since the Catholic Church is the only
institution that even claims supernatural authority, with all its
merciless logic, she has again the allegiance of practically all
Christians who have any supernatural belief left. There are a few faddists left, especially in America and here; but they are negligible. That is all very well; but, on the other hand, you must remember that Humanitarianism, contrary to all persons’ expectations, is becoming an actual religion itself, though anti-supernatural. It is Pantheism; it is developing a ritual under Freemasonry; it has a creed, ‘God is Man,’ and the rest. It has therefore a real food of a sort to offer to religious cravings; it idealises, and yet it makes no demand upon the spiritual faculties. Then, they have the use of all the churches except ours, and all the Cathedrals; and they are beginning at last to encourage sentiment. Then, they may display their symbols and we may not: I think that they will be established legally in another ten years at the latest.
“Now, we Catholics, remember, are losing; we have lost steadily for more than fifty years.

Have you read it?

Benson describes, already in 1907, a world in which “the euthanatisers are the only priests” and the antichrist is here.

How much he got right is rather disconcerting.

I have a wonderful Baronius Press Classic edition, but right now I am listening to the novel, read by the brilliant Simon Vance (who also read all the indispensable Aubrey/Maturin novels).  Get it through Audible.   US HERE – UK HERE 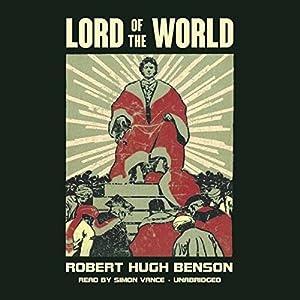 For an inexpensive book version…

If you want to know more about the author, Msgr Robert Hugh Benson, this is a great read.  Joseph Pearce’s Literary Converts.

Pearce writes of a fascinating chain reaction of English converts to the Catholic Church.

In any event… this is stuff that every Catholic should know.

And Lord Of The World is a book that every Catholic should have read.

Fr. Z is the guy who runs this blog. o{]:¬)
View all posts by Fr. John Zuhlsdorf →
This entry was posted in Semper Paratus, The Coming Storm, The future and our choices, The Last Acceptable Prejudice and tagged dystopian, Lord of the World, Robert Hugh Benson. Bookmark the permalink.