I took my spiffy Mitsui altar cards to be framed.  Now I have them, completed.

Ready for a first look. Here is the frame I chose. The guy at the store and I had a discussion about whether a narrow frame like this would be sturdy enough to support something this large.  As it turns out, its good and solid.

Back at the ranch. I think I chose well. In contrast to my wonderful cards from Silverstream Priory, which I’ve had on my private altar for some time.  They, too are great. I have these great cards and I want to use all of them at the same time!

I guess I’ll have to rotate them on a seasonal basis and also take some to church.

In any event, friends, if you are looking for something for a priest… or just your wall for devotional purposes… these cards are magnificent. The talented Catholic artist Daniel Mitsui, whom I’ve often mentioned in these electronic pages, has completed a set if illuminated altar cards for use in the Traditional Latin Mass (aka Usus Antiquior and Extraordinary Form).

You might recall that I recently posted a story about a woman afflicted with Parkinson’s.  Her friend brought Mitsui’s coloring books for her therapy, and they played a role in her conversion and reception into the Catholic Church.  HERE

HE SENT ME A SET! Here they are, pinned down by low ball glasses. I like how Peter has his hand in the loop. The footprints on the rock show where the nails holes in the Lord’s feet remain!

And there’s a leopard? with some fancy mushrooms. On the epistle side card, Noah is making his getaway.   There’a lot going on in the margins. The not so fortunate in the water remind us of our dependence on God’s mercy.  Lavabo indeed. And because it’s Advent… I don’t remember the goose being at the manger.

And is that a … scorpion?

Daniel describes all the images and symbols and they are packed.

That just scratches the surface! 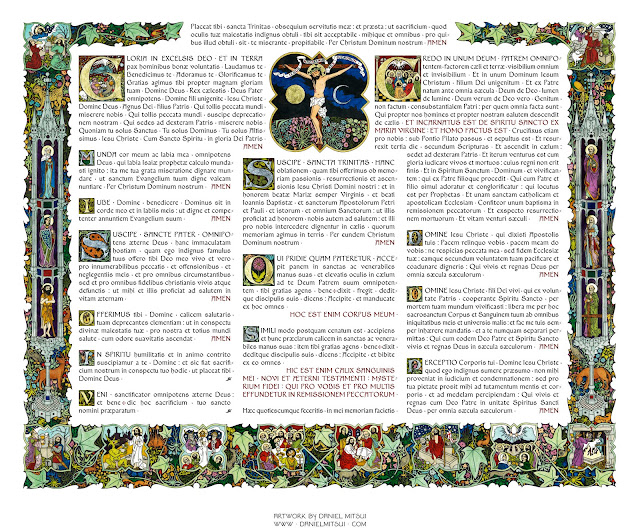 He developed his own lettering in order to calligraph the cards by hand.  Amazing.

Christmas gift to priests who say the TLM.   Have them framed and give them to Father for Christmas.

BTW… I also very much like the cards from Silverstream, which I am using right now for my private altar.  Also, remember SPORCH for travel altar cards and great Requiem cards, along with some “antique” sets that are spectacular (and good for a man who already knows his prayers well).

I wouldn’t in the least mind were some donations to come in to help me frame these bad boys.  I’d like to use them!   They’ll be a little spendy to frame with the dignity they deserve, but what a sight they’ll be!

Fr. Z is the guy who runs this blog. o{]:¬)
View all posts by Fr. John Zuhlsdorf →
This entry was posted in ACTION ITEM!, The Campus Telephone Pole and tagged altar cards, Daniel Mitsui. Bookmark the permalink.