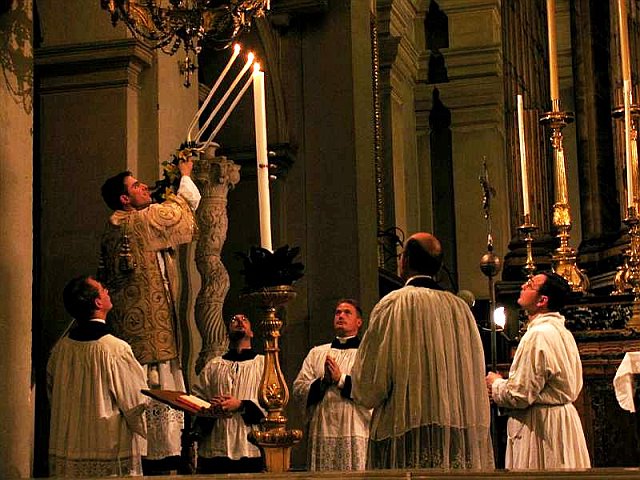 This Sunday, in the Novus Ordo calendar, is called the 3rd Sunday of Easter. Let’s have a look at the Collect.

This Sunday’s Collect, it seems to me, reflects a conscious attempt on the part of Holy Church to remind us of the Easter Vigil.  As a matter of fact, let’s see if I can give you a new way to look at that Paschal candle which burns in the sanctuary during Mass in this Easter season.

The prayer has antecedents in both the Veronese and Gelasian sacramentaries, though it is not in pre-Conciliar editions of the Missale Romanum.

Vocabulary similar to our Collect is found in the works of St Ambrose (+397), such as his Exposition of Psalm 118 and his De mysteriis, a post-Easter explanation of the sacred, liturgical mysteries to the newly baptized.  For example, “… adulescens vel certe renovatus aquilae iuventute per baptismatis sacramenta…” (ex. Ps. cxviii, 18, 26).

The words exsultet and adoptio bring our mind’s ear and eye to the Vigil of Easter, the deacon’s great moment to shine as he sings the Praeconium Paschale or Exsultet before the Paschal candle as the people hold their candles.  The Vigil is when many new Christians are by baptism made the Father’s sons and daughters through a spiritual adoption.

The Exsultet was composed perhaps as early as the fifth century. Parts may go back to St Ambrose.  In this great proclamation there are many images of light and darkness.  One image concerns the fiery light of candles: beeswax nourishes the divided and yet undiminished flame.  Pope Benedict in his sermon for the Easter Vigil of 2010 remarked that

“the cooperation of the living community of believers in the Church in some way resembles the activity of bees. It builds up the community of light. So the candle serves as a summons to us to become involved in the community of the Church, whose raison d’être is to let the light of Christ shine upon the world.” VERY COOL POINT: Another meaning of adoptio in classical Latin is the “admission of a bee into a new hive.”

Look at what we lose when we lose our Latin.

What a marvelous way to think of sincere and observant Catholic Christians!

May all our works and words reflect the cooperation of God’s grace and love of neighbor!

May we be bright like kindled candles, honey sweet!

Some of you may be thinking, “But Father! But Father! This is over the top.  You’ve gone too far this time in making those connections.  All this… ancient stuff is not relevant to us. As a matter of fact, that was a time of PATRIARCHY, which is bad!   “FATHERS” of the Church.  Get it?  You posts are triggering me!  And I even called you “Father”!  See what you’ve done? Your are an angry and hate-filled micro-aggressor and YOU HATE VATICAN II!”

Our prayers flow down to us from an ocean of ancient culture, pagan and Christian.  Dare I say it flows down to us like honey from the comb?

Our vocabulary retains overtones of the Roman military, of agriculture, philosophy and religion. In previous centuries, people not yet gifted with glowing screens and text messaging more easily heard connections between fleeting phrases. They needed as a hook only a few words of a psalm, or even a single unusual word to evoke a massive interior meaning.  For them, certain words and phrases were like the TARDIS: bigger on the inside.  In the Gospels, Our Lord constantly alludes to psalms and the prophets. His (often hostile) listeners caught these allusions immediately.  People of seemingly simpler oral/aural cultures are better at this than we O so technologically sophisticated denizens of the West.  Our memories and attention spans are shrinking with each apparent advance.

But I digress. What was I talking about, again?

O God, let your people rejoice always, the youth of spirit having been renewed, so that they (the people) who rejoice now that they have been restored in the glory of spiritual adoption, may in the hope of true thanksgiving await the day of the resurrection.

God our Father, may we look forward with hope to our resurrection, for you have made us your sons and daughters, and restored the joy of our youth.

May your people exult for ever, O God, in renewed youthfulness of spirit, so that, rejoicing now in the restored glory of our adoption, we may look forward in confident hope to the rejoicing of the day of resurrection.

Fr. Z is the guy who runs this blog. o{]:¬)
View all posts by Fr. John Zuhlsdorf →
This entry was posted in SESSIUNCULA and tagged adoptio, candles, Exsultet, honey. Bookmark the permalink.