ASK FATHER: Mass at a side altar during Exposition of the Blessed Sacrament? And a short rant.

It is permissible for to have Public Mass at a side altar during Adoration.? And does it matter that the side altar is in the sanctuary, which is quite small? It just seems odd to me because they are both m the same line of sight.

I don’t believe that for the Novus Ordo this is permissible.  However, in a place where the Traditional Mass is being used it can be done.

For example, during the devotion – O PLEASE, Fathers!, bring this back! – of the Quarant’Ore, Forty Hours Devotion, while the Blessed Sacrament is exposed on the main altar, PUBLIC Mass (Pro pace) can be said on a side altar.

PRIVATE Mass can also be said.  The directives for Forty Hours indicate bells are not to be rung during the private Masses said in the church during Exposition.

Also, Forty Hours is the only time, now, when Mass can be said at the same altar where the Blessed Sacrament is exposed, Missa coram Sanctissimo.   This was once common in places like Austria, where such Masses probably helped to inoculate the people again the virus of Protestantism.

Again, I make a plea to priests and bishops to

Once, dioceses had Forty Hours going on somewhere every week.   The year’s schedule for the churches where Forty Hours would be was even published in secular papers.   The clergy would invite each other to participate and priests would come to pray and then to spend time together afterwards… serious and good clericalism!

This devotion developed in time of necessity.

It is not a kind of long Corpus Christi.

It is not a long Holy Thursday.

It grew up to beg God for relief and protection from plague and invasion and other calamities.

The Church has been where we are before.  Let us RECOVER our spiritual weapons.

Or… how lazy have priests become?  How indifferent to the supernatural might we could wield? 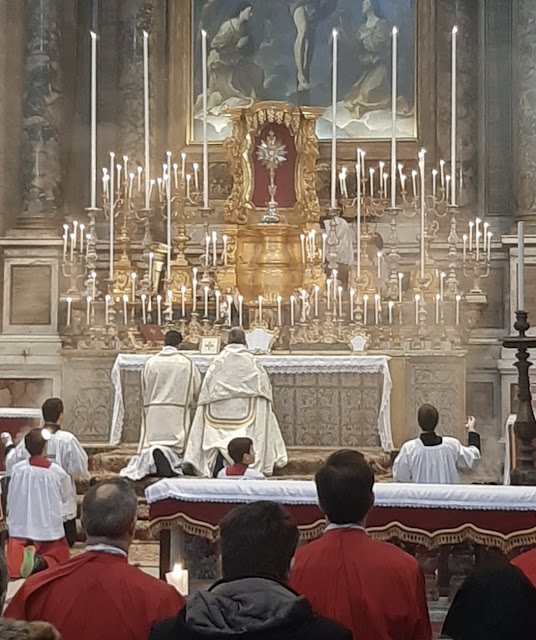