In the ancient world books were rare. If you had a book, you were probably wealthy. If you got your hands on a book, you had to remember what you read because you might not ever see that particular book again. There would be public readings of books so that more people could hear them. People had to read aloud, actually, to help their memory. The more senses you could involve, the easier it was to remember the material. This holds true today! But, in the ancient world, everyone who read, read aloud.

There is a famous moment recounted by St. Augustine in his Confessions (Bk VI) about visiting St. Ambrose. Augustine walked into the room where Ambrose was sitting and saw him staring at a book. He was reading and not even moving his lips! Augustine was so impressed by this that would slip silently out of the room without saying anything to Ambrose, lest he disturb him. Augustine was very impressed by Ambrose and had wanted to talk to him about various problems and doubts. Because of all the people pressing around Ambrose, who was tremendously important and sought after, Augustine was never able to get near him in public.

Let’s read the text and hear about it from Augustine himself! Remember, at this point Augustine is a hot property in Milan and not yet Christian, though interiorly twisting on the spikes of difficult doubts and problems. He wasn’t really praying yet and he he still was considering things in very worldly terms.

6,3. Nor had I come yet to groan in my prayers that thou wouldst help me. My mind was wholly intent on knowledge and eager for disputation. Ambrose himself I esteemed a happy man, as the world counted happiness, because great personages held him in honor. Only his celibacy appeared to me a painful burden. But what hope he cherished, what struggles he had against the temptations that beset his high station, what solace in adversity, and what savory joys thy bread possessed for the hidden mouth of his heart when feeding on it, I could neither conjecture nor experience.

Nor did [Ambrose] know my own frustrations, nor the pit of my danger. For I could not request of him what I wanted as I wanted it, because I was debarred from hearing and speaking to him by crowds of busy people to whose infirmities he devoted himself. And when he was not engaged with them–which was never for long at a time–he was either refreshing his body with necessary food or his mind with reading.

Now, as he read, his eyes glanced over the pages and his heart searched out the sense, but his voice and tongue were silent. Often when we came to his room–for no one was forbidden to enter, nor was it his custom that the arrival of visitors should be announced to him–we would see him thus reading to himself. After we had sat for a long time in silence–for who would dare interrupt one so intent?–we would then depart, realizing that he was unwilling to be distracted in the little time he could gain for the recruiting of his mind, free from the clamor of other men’s business. Perhaps he was fearful lest, if the author he was studying should express himself vaguely, some doubtful and attentive hearer would ask him to expound it or discuss some of the more abstruse questions, so that he could not get over as much material as he wished, if his time was occupied with others. And even a truer reason for his reading to himself might have been the care for preserving his voice, which was very easily weakened. Whatever his motive was in so doing, it was doubtless, in such a man, a good one. 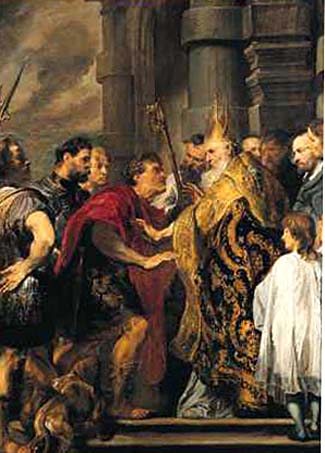 Amazing stuff there. Notice that Augustine, writing many years after the scene he recounts, and now a bishops himself, understands what it is to be entirely lacking in free time. He wonders if Ambrose read quietly so that the intellectually hungry people around him wouldn’t ask him to explain what he was reading, thus cutting short his own time for study. Also, Augustine himself later in life suffered from having a very weakened voice. In his sermons we acutally here him saying once in a while to the crowd that they had to stop making so much noice in their reactions to him, because his voice to too weak to shout over them! At any rate, Augustine puts a positive spin on what Ambrose did.

Ambrose’s influence was pivotal for Augustine. Ambrose’s eloquent explanations of Scripture finally help break down Augustine’s prejudices against Scripture which as a professsional uberorator he considered ugly and of little value. Augustine had bought into the criticism made by pagans of the Scriptures. Ambrose also helped Augustine make the philosophical move from perceiving the divinity as material to understanding God’s divinity as wholly immaterial. This was a key for Augustine and his intellectual conversion. Here is a passage from the same section of the Confessions, immediately following the one I just cited. Augustine is still talking about Ambrose’s influence on him:

4. But actually I could find no opportunity of putting the questions I desired to that holy oracle of thine in his heart, unless it was a matter which could be dealt with briefly. However, those surgings in me required that he should give me his full leisure so that I might pour them out to him; but I never found him so. I heard him, indeed, every Lord’s Day, "rightly dividing the word of truth" among the people. And I became all the more convinced that all those knots of crafty calumnies which those deceivers of ours had knit together against the divine books could be unraveled.

I soon understood that the statement that man was made after the image of Him that created him was not understood by thy spiritual sons–whom thou hadst regenerated through the Catholic Mother through grace–as if they believed and imagined that thou wert bounded by a human form, although what was the nature of a spiritual substance I had not the faintest or vaguest notion. Still rejoicing, I blushed that for so many years I had bayed, not against the Catholic faith, but against the fables of fleshly imagination. For I had been both impious and rash in this, that I had condemned by pronouncement what I ought to have learned by inquiry. For thou, O Most High, and most near, most secret, yet most present, who dost not have limbs, some of which are larger and some smaller, but who art wholly everywhere and nowhere in space, and art not shaped by some corporeal form: thou didst create man after thy own image and, see, he dwells in space, both head and feet.

These passages ought to remind us how important mentors in the Faith can be. We read in 1 Peter 3:15: "Always be prepared to make a defense to any one who calls you to account for the hope that is in you, yet do it with gentleness and reverence". We must be ready to answer questions, give explanations for what we believe as Catholics. We can play a role, perhaps as God’s own finger, in directing someone’s mind and heart into the fullness of the Truth.

You might not be an Ambrose to someone else’s Augustine, but you might help to save a wandering soul.