Every five years bishops are required to make an ad limina apostolorum pilgrimage to Rome to visit the "thresholds" and the tombs of the Apostles Peter and Paul and to meet with the Holy Father and Curia for status quaestionis review.   Bishops usually travel in groups according to regions.  The Holy Father addresses them.

When the Pope gives an ad limina apostolorum address he is speaking firstly to that group of bishops.  Therefore his address will have a focus on issues important for that region.  However, the Pope’s address is also aimed at all the bishops of the world.  The whole world, all the faithful and all non-Catholics everywhere are allowed to listen in.  The ad limina addresses have a global impact as well as a regional impact, particularly when the Holy Father is elucidating the larger principles which underpin his more regionally focused remarks.
The Holy Father recently addressed the bishops of Scotland who made their ad limina visit. 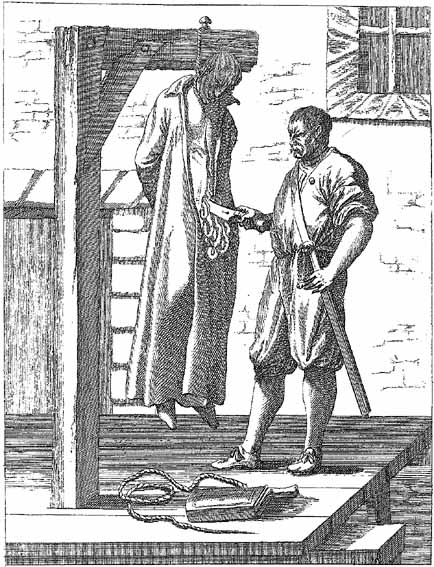 Let’s have a look at the meat of the Pope’s address, with my emphases and comments.

It is a happy coincidence that the Year for Priests, which the whole Church is currently celebrating, marks the four hundredth anniversary of the priestly ordination of the great Scottish martyr Saint John Ogilvie. [After the obligatory introductory paragraph, the Pope leads with an image of a martyr.  St. John Ogilvie did not acquiesce to the pressure of the political regime but remained faithful even through horrible torture and agonizing death.] Rightly venerated as a faithful servant of the Gospel, he was truly outstanding in his dedication to a difficult and dangerous pastoral ministry, to the point of laying down his life. Hold him up as an example for your priests today. [Therefore for themselves as well.] I am glad to know of the emphasis you place on continuing formation for your clergy, especially through the initiative "Priests for Scotland". The witness of priests who are genuinely committed to prayer and joyful in their ministry bears fruit not only in the spiritual lives of the faithful, but also in new vocations. Remember, though, that your commendable initiatives to promote vocations must be accompanied by sustained catechesis among the faithful about the true meaning of priesthood. [Who is the priest?  If we are going to true Catholics, we must have a clear vision of who the priest is in the Church, and what distinguishes the priest from the layperson.] Emphasize the indispensable role of the priest in the Church’s life, above all in providing the Eucharist by which the Church herself receives life. And encourage those entrusted with the formation of seminarians to do all they can to prepare a new generation of committed and zealous priests, well equipped humanly, academically and spiritually for the task of ministry in the twenty-first century.  [The comment about the seminary is interesting.  Didn’t Scotland close a seminary recently?]

Hand in hand with a proper appreciation of the priest’s role is a correct understanding of the specific vocation of the laity. Sometimes a tendency to confuse lay apostolate with lay ministry has led to an inward-looking concept of their ecclesial role. [One of the most important things we have to sort out is precisely what we mean by "ministry".  This is a question that Papa Ratzinger has been interested in for a very long time.  The undersigned even had a conversation with him on this point many years ago.] Yet the Second Vatican Council’s vision is that wherever the lay faithful live out their baptismal vocation – in the family, at home, at work – they are actively participating in the Church’s mission to sanctify the world. A renewed focus on lay apostolate will help to clarify the roles of clergy and laity and so give a strong impetus to the task of evangelizing society.  [Here the Pope has given a distinction:  use "apostolate" rather than "ministry".]

That task requires a readiness to grapple firmly with the challenges presented by the increasing tide of secularism in your country. [And not just in Scotland.  Therefore, everyone should be paying attention.] Support for euthanasia strikes at the very heart of the Christian understanding of the dignity of human life. [Euthanasia laws are expanding also in the USA.] Recent developments in medical ethics and some of the practices advocated in the field of embryology give cause for great concern. If the Church’s teaching is compromised, even slightly, in one such area, then it becomes hard to defend the fullness of Catholic doctrine in an integral manner. [YES!] Pastors of the Church, therefore, must continually call the faithful to complete fidelity to the Church’s Magisterium, while at the same time upholding and defending the Church’s right to live freely in society according to her beliefs. [Again, we are back to the overarching concern of this pontificate.  We must have a strong Catholic identity in order to carry out our mission in the world.  If we don’t know who we are, we will be weak in the public square, even driven from it.  We must revitalize our Catholic identity.  That includes rejection of "Cafeteria Catholicism.  That is exactly what he is saying, above, about complete fidelity to the Magisterium.  We can’t pick and chose what parts we like and reject others.  And we must present what the Church teaches in an integral manner, showing how all the different spheres of faith and life address in the Church’s teaching reflect a single source for Truth.]

The Church offers the world a positive and inspiring vision of human life, the beauty of marriage and the joy of parenthood. It is rooted in God’s infinite, transforming and ennobling love for all of us, which opens our eyes to recognize and love his image in our neighbour (cf. Deus Caritas Est, 10-11 et passim). Be sure to present this teaching in such a way that it is recognized for the message of hope that it is. All too often the Church’s doctrine is perceived as a series of prohibitions and retrograde positions, whereas the reality, as we know, is that it is creative and life-giving, and it is directed towards the fullest possible realization of the great potential for good and for happiness that God has implanted within every one of us.

The Church in your country, like many in Northern Europe, [The Pope is not talking to the Scottish bishops alone.] has suffered the tragedy of division. It is sobering to recall the great rupture with Scotland’s Catholic past that occurred four hundred and fifty years ago. I give thanks to God for the progress that has been made in healing the wounds that were the legacy of that period, especially the sectarianism that has continued to rear its head even in recent times. Through your participation in Action of Churches Together in Scotland, see that the work of rebuilding unity among the followers of Christ is carried forward with constancy and commitment. While resisting any pressure to dilute the Christian message, set your sights on the goal of full, visible unity, for nothing less can respond to the will of Christ.

You can be proud of the contribution made by Scotland’s Catholic schools in overcoming sectarianism and building good relations between communities. Faith schools are a powerful force for social cohesion, and when the occasion arises, you do well to underline this point. As you encourage Catholic teachers in their work, place special emphasis on the quality and depth of religious education, so as to prepare an articulate and well-informed Catholic laity, able and willing to carry out its mission "by engaging in temporal affairs and by ordering them according to the plan of God" (Christifideles Laici, 15). A strong Catholic presence in the media, local and national politics, the judiciary, the professions and the universities can only serve to enrich Scotland’s national life, as people of faith bear witness to the truth, especially when that truth is called into question.

Fr. Z is the guy who runs this blog. o{]:¬)
View all posts by Fr. John Zuhlsdorf →
This entry was posted in SESSIUNCULA, The Drill and tagged ad limina, Scotland, Scottish bishops, sectarianism, St. John Ogilvie. Bookmark the permalink.