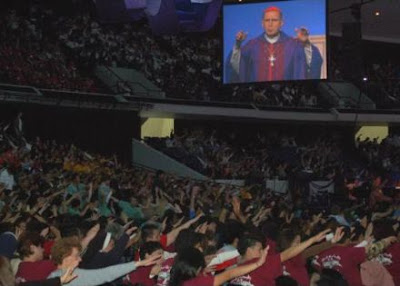 As you read keep in mind that Archbishop Gomez will be taking over in Los Angeles before too long.

I add an observation at the end.

From CWN with my emphases and comments:

Cardinal Roger Mahony of Los Angeles has offered strong criticism of a measure passed by the Arizona legislature that would require police to arrest suspected illegal immigrants who are unable to provide documentation. The bill, if signed into law, would also make it illegal to hire day laborers off the street and to transport an illegal immigrant. [Note well: At issue is the ability of people who are in the USA illegally.  They are "illegal immigrants".]

[The Cardinal continues:] “The Arizona legislature just passed the country’s most retrogressive, mean-spirited, and useless anti-immigrant law [SB 1070, awaiting the expected signature of Gov. Jan Brewer],” Cardinal Mahony wrote on April 18. “The tragedy of the law is its totally flawed reasoning: that immigrants come to our country to rob, plunder, and consume public resources.” [I doubt that many people in the USA illegally are intending to "plunder".  But some are.  It would be nice to be able to prevent those who have that intention from carrying out their plans to commit crimes.  However, I do believe that quite a few people coming into the USA illegally do have the intention of consuming public resources.  No?  And if it is only a matter of a very few, it would still be good to know who they are and what their reasons are.  Are they truly refugees?  Do they need other forms of assistance?]

“The law is wrongly assuming that Arizona residents, including local law enforcement personnel, will now shift their total attention  ["total"?  Why does it have to be "total"?] to guessing which Latino-looking or foreign-looking person may or may not have proper documents,” he added. [I am guessing that His Eminence is not a supporter of profiling.] “I can’t imagine Arizonans now [Here it comes:] reverting to German Nazi and Russian Communist techniques whereby people are required to turn one another in to the authorities on any suspicion of documentation.”  [That would be a "no" vote from Card. Mahony.]

Although the measure would require police to ask for documents if there is a “reasonable suspicion” that a person is an illegal immigrant, The Los Angeles Timesnoted that the bill “would not require people to report suspected illegal immigrants to authorities, as [Cardinal] Mahony intimated.”

The issue of illegal immigration is very complex.  People of good will can have differences of opinions about how to address the issue.  Cardinal Mahony is within his rights to express a negative view about the legislation in Arizona.  People are within their rights to express their view of Card. Mahony’s reaction.

What I find interesting in this is the fact that liberals – and I think it is fair to place His Eminence in the liberal camp, rather than the conservative or traditional side – can use whatever sort of inflammatory rhetoric they choose while conservatives are lambasted with all manner of criticism, accusations of incivility, even of sedition, if they use strong rhetoric.

Fr. Z is the guy who runs this blog. o{]:¬)
View all posts by Fr. John Zuhlsdorf →
This entry was posted in The Drill and tagged Arizona, Card. Mahony. Bookmark the permalink.