Benedict XVI, Pope of Christian Unity, criticized for openness to the SSPX

Benedict XVI is the Pope of Christian Unity.

Sandro Magister has on his site Chiesa a piece about an important "ecumenical" effort, and note those " ".

He addresses a problem in the dialogue with the Society of St. Pius X or SSPX: if you try to see any of their points, efforts, or arguments in a positive light, if you even talk to them… you are accused by some of "betraying the Council"… of "trying to turn the clock back". 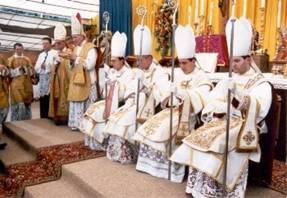 Those who dialogue with them risk the accusation of betraying Vatican Council II. The pope tries, and is criticized by a German theologian. But in the meantime, many traditionalist groups have already made their peace with Rome

ROME, June 2, 2010 – In two days, Benedict XVI will travel to Cyprus. It will be the first time that a pope has visited the island, invited and welcomed by the local Orthodox Church. Not even John Paul II was able to do so.  [Pope Benedict is the Pope of Christian Unity.]

But Benedict XVI is engaged on another ecumenical front.

It’s with the followers of Archbishop Marcel Lefebvre, who are still in a state of schism with the Church of Rome [That is disputed by some.  Also, the Holy See seems to have stopped using that language ("schism") some time ago, while trying to make a distinction between "schism" and "act of schism" when referring to the illicit 1988 consecration of bishops.] because of their rejection of the authenticity of Vatican Council II. [Do they reject the "authenticity" of the Council?  Do they reject that it was a true Council of the Church?]

At the beginning of 2009, the pope’s decision to lift the excommunication of four bishops ordained illicitly by Lefebvre (in the photo) – a decision poorly communicated and poorly understood inside and outside of the Church – caused a storm of confusion and criticism.

In order to clarify the meaning of his action, Benedict XVI sent a letter to the bishops on March 10 of last year. In it, he explained that the lifting of the excommunication was intended to call "those thus punished to repent and to return to unity." And he stressed that the journey of reconciliation had yet to be undertaken, because the dispute was of a doctrinal nature and concerned the acceptance of Vatican Council II and the post-conciliar magisterium of the popes.

In confirmation of this doctrinal nature of the dispute, the pope closely joined the pontifical commission "Ecclesia Dei" – charged with dialoguing with the Lefebvrists and with other similar groups – with the congregation for the doctrine of the faith. [There are some orthography quirks in the original copy. Italians tend to capitalize fewer things than writers of English, but even in Italian the names of the dicasteries ought to be capitalized.  This doesn’t really affect our content, however.]

In the same letter to the bishops, Benedict XVI explained that the call to the unity of faith must apply to all Christians. And therefore it is senseless to "casually let drift farther from the Church" the 491 seminarians, 6 seminaries, 88 schools, 2 university institutes, 117 brothers, 164 sisters, and thousands of faithful who make up the Lefebvrist community.

But the pope also noted, with regret, that there is an intolerance in the Church aimed both at the Lefebvrists and at those who "dare to approach them."  [There sure is!  Intolerance is leveled also at those who don’t approach them but who opt for legitimate traditional expressions of our Catholic Faith without ever having spoken with a member of the SSPX or any other separated group.]

Benedict XVI himself is a target of this intolerance. [Nothing new here.] He wrote to the bishops that because of his efforts to reconcile the Lefebvrists with the Church, "some groups openly accused the pope of wanting to turn back the clock to before [Vatican Council II]."

These criticisms have recently reappeared, even in theologically sophisticated forms. For example, in a cerebral commentary written by Eberhard Schockenhoff, professor of moral theology at the University of Freiburg, in the April 2010 issue of the German Jesuit magazine "Stimmen der Zeit," reproduced in its entirety, in Italian, in the latest issue of "Il Regno."

Schockenhoff is a professor of moral theology at the University of Freigburg, and was a disciple and assistant of Walter Kasper, [Surprise.] now a cardinal and president of the pontifical council for Christian unity.

In his commentary, Schockenhoff correctly writes that the real disagreement between the Church of Rome and the Lefebvrists does not concern the Mass in Latin, but the teaching of Vatican II, especially on ecclesiology and on freedom of conscience and religion.

But he also writes that Rome is wrong to whip up restrictive interpretations of the conciliar texts to offer to the Lefebvrists in the hope that these will be accepted by them. Because in Schockenhoff’s view, this is exactly what is happening in the closed-door meetings organized by "Ecclesia Dei." [This is the usual blinkered view which, when held by anyone with power ends in the explanation and defense: "Shut up!"  We have no need to fear discussions which may lead to a deepening of our understanding of the theology of the Church or religious liberty or any other issue addressed by the Second Vatican Council, or indeed the nature and purpose of that Council.  We should not fear the truth.  If the doctrinal discussions with the SSPX lead us to a better understanding then we all benefit.]

Rome – Schockenhoff writes – wants to extract a verbal acknowledgment of the freedom of conscience and religion, the  cornerstones of modern culture, from no less than the Lefebvrists, the most dogged enemies of modernity. [Perhaps "modernism" would be better here?] But doing this is like trying to "square the circle," impossible. No one would ever believe in the sincerity of such a reconciliation, even if it were signed.  [Why?  Because he is prejudiced against them?  Isn’t this a bit of a rash judgment?]

In condemning the "hermeneutic tightrope walk" by which the Church of Rome wants to reconcile the Lefebvrists to itself, with grave harm to the correct interpretation of the Council, Schockenhoff repeatedly cites Ratzinger the theologian and his "Platonist-Augustinian conception of conscience": a conception "too different" – he writes – from that of the conciliar declaration "Dignitatis Humanae" on religious freedom.  [There is a lot going on there, but the main point to look at is his claim that somehow Pope Benedict is straying from the "correct interpretation" of the Council.  This from some prof in Freiburg.  He must know what the "correct" interpretation is and is just helping Pope Benedict to see the error of his ways.]

The work by Ratzinger that is cited is from 1992. Inexplicably, however, Schockenhoff does not cite a much more pertinent and recent text by Ratzinger, after he became pope.  [I can see a follow up interview with this fellow. When this point raised, "Shut up!", he explains.]

This key text is the final part of the memorable speech that Benedict XVI gave to the Roman curia on December 22, 2005, on the interpretation of Vatican Council II.

In explaining how to interpret the Council correctly, Benedict XVI shows how it did in fact introduce new developments with respect to the past, but always in continuity with "the deepest patrimony of the Church."

And as an example of this interplay between newness and continuity, the pope illustrates precisely the conciliar ideas on freedom of religion: the main point of division between the Church and the Lefebvrists.

From this speech onward, it becomes clear that for Benedict XVI, the Lefebvrists can reconcile with the Church only if they accept everything written in "Dignitatis Humanae" according to the interpretation of it made by the pope, and not according to another more restrictive, or "Platonist-Augustinian," interpretation.

There follow in Magister’s piece the concluding passage of Benedict XVI’s speech on December 22, 2005 and a commentary by Fr. Giancarlo Rocca, director of the "Dizionario degli istituti di perfezione," on the traditionalist groups that have been brought back to obedience so far by the pontifical commission "Ecclesia Dei," the same one that is working on the Lefebvrists. The commentary was published in "L’Osservatore Romano" on May 11, 2010.

The issue of religious liberty is very difficult.  The document of the Council on the topic doesn’t resolve every possible question.  People of good will are free – within reasonable parameters – to have both questions and disagreements about some interpretations of Dignitatis humanae and the history of magisterial teachings on religious liberty because… I repeat… it is a very difficult topic.

It seems to me that if a basic foundation of a common interpretation can be formed between the Holy See and the SSPX, then the issue of religious liberty shouldn’t have to be a deal breaker.

But there are underlying theological questions concerning the nature of the Church, the starting points of theology, the problem of "modernity" and "modernism", the relation of the transcendent to the immanent.

If the discussions taking place –  between people of good will … and in charity we should assume they have good will – can help us to greater light about all these issues, then we all benefit.