From Operation Rescue with my edits: 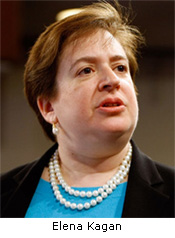 Washington, DC – Earlier this week, the Clinton Library released a number of memos related to Supreme Court nominee Elena Kagan. The most discussed memo, dated January, 1997, concerns her take on the necessity of partial birth abortions and her input by adding language to a statement issued by the American College of Obstetricians and Gynecologists (ACOG) that favored the now-illegal late-term abortion method.

While Kagan determined that the pro-abortion ACOG was perhaps the most reliable source of medical opinion on Partial-Birth abortions, she cites statements of opposing viewpoints issued by the Society of Physicians for Reproductive Health (PRCH) and “a group of mostly pro-life physicians called PHACT.”

Kagan does not include a written statement from PHACT and only quotes from that organization in part. In contrast to her dismissive attitude toward PHACT, Kagan not only includes a full, two-page statement issued by PRCH on their letterhead, but highlights portions of that statement that agreed with the position in support of partial birth abortion that she advocated.

The Society of Physicians for Reproductive Choice is without a doubt the most extreme organization of abortionists in the nation. It is a group of abortionists who proudly boast of having committed illegal abortions prior to Roe v. Wade and advocate for no restrictions on abortion at all – ever.

In other words, the PRCH wants abortionist to have the right to conduct human experimentation on their unwitting abortion patients in order to develop new ways to dismember, poison, or otherwise kill innocent pre-born babies, many which are viable and healthy. One of their members, Curtis Boyd has already admitted he has done so much in his development of new ways to kill babies in the second trimester of pregnancy.

It simply doesn’t get any more extreme than that. Yet, this is a group that Kagan has taken cues from in the past. The same basic philosophy promoted in the 1997 PRCH memo made its way into the policy statement of ACOG, thanks to recommendations made by Kagan in her own handwriting.

The 1997 ACOG statement, with the PRCH inspired Kagan additions, helped defeat the Federal ban on partial birth abortions that year and prolonged the use of this grisly brain-sucking technique an additional six years until the Partial Birth Abortion Ban Act of 2003 was finally passed and signed into law.

“This memo shows us that Kagan had no problem dictating policy to physicians, just like she is going to dictate policy from the bench,” said Operation Rescue President Troy Newman. “Any Senator who supports Kagan supports abortion policy in its most extreme form, including abortions through the ninth month of pregnancy and human experimentation on women. This is unthinkable and unconscionable.”

“The American people overwhelmingly oppose late-term abortions and radical abortion policy that is reflected in the Kagan memo. Senators who would have the bad judgment to vote for her confirmation invite serious voter backlash during their next election,” said Newman. “Remember the public outrage expressed when Senators Ben Nelson and Bart Stupak betrayed their pro-life constituency during the debate on tax funding of abortions in health care. Kagan supporters should expect nothing less.”

Contact your Senator to voice opposition to the Kagan confirmation to the U.S. Supreme Court

Fr. Z is the guy who runs this blog. o{]:¬)
View all posts by Fr. John Zuhlsdorf →
This entry was posted in Emanations from Penumbras and tagged Elena Kagan, SCOTUS. Bookmark the permalink.