QUAERITUR: How to dispose of an old sacrarium? 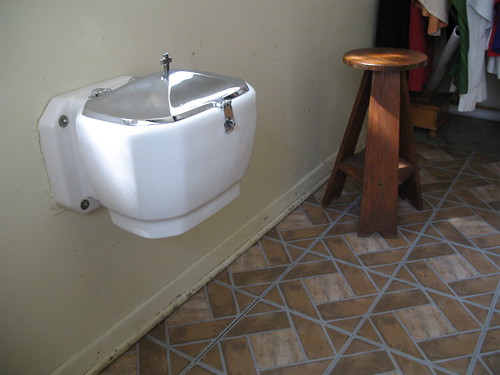 When there has been some mishap with the Blessed Sacrament, when perhaps liquid that was dissolved Hosts must be disposed of, when linens must be cleaned, when holy water or water blessed for Mass must be disposed of, it should go directly into the ground.  That is why ever sacristy should have a sacrarium, a kind of sink with its pipe going into the earth rather than into a sewer.  The sacrarium is useful and necessary for the disposal of some sacred things in the proper way.

But when the instrument of disposal, the sacrarium, needs disposing of, what to do?

Are there rubrics (if that is the correct terminology) for disposing of sacraria? A friend of mine is worried that his parish sacrarium may be inappropriately removed (alas, that it is being removed!). He thinks the parish may be throwing away the piping for it. Is there some way the pipe should be handled? Also, and somewhat related, is it acceptable to dispose of the water — used to soak the corporals and purificators — into bushes or plants on church grounds when there is no sacrarium?

Good question.  Yes, the water for linens and so forth can be poured into the ground in some decent place.  The flower beds would be a pretty good choice.

In most American or modern sacristies the sacrarium could look like a regular sink, but it will usually have a cover of some kind, one that closes completely or one that is like a grate.  It could be next to the regular work sink or it could be freestanding or attached separately on the wall.   Variations abound.  It is, however, usually be marked, with a Cross or with the word “Sacrarium” itself.  It might even have a lock.  This would be because sometimes Hosts must be completely dissolved, and that takes time.  You would put them in, say, an covered ablusion cup, and then leave it sitting in the sacrarium, which you could lock, until it was time to pour the liquid down.

I am unaware of any directive about the disposal of a sacrarium. At first glance, it is reasonable that if we take care to disposed of books used for worship properly or dispose of vestments and vessels, then the sacrarium and its parts should be shown a measure of respect.  Surely this matter has come up before, somewhere, because churches are being torn down and/or rebuilt, sacristies are being redone all the time.

If the sacrarium and the pipes could not be recycled in some way so that it could continue their use as a sacrarium – because every sacristy needs one! – then I suppose they could be buried, perhaps in the foundation of a new church structure. I am reminded of the solution one diocese had for its old, now obsolete liturgical books. They placed them in space in the floor of a sanctuary being rebuilt.

Furthermore, it might not actually be possible in a reasonable and practical way to get at the pipe for the sacrarium, other than the part that is close to the basin and drain itself.  In that case, there is nothing to do.

I think the basic principle to protect is that we should treat those things which are intended for sacred uses with respect and not just toss them into the garbage as if they were nothing.

Fr. Z is the guy who runs this blog. o{]:¬)
View all posts by Fr. John Zuhlsdorf →
This entry was posted in "How To..." - Practical Notes, ASK FATHER Question Box and tagged sacrarium. Bookmark the permalink.