St. Monica and her incipient alcoholism with some Latin 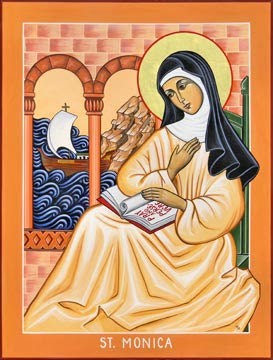 From Serge Lancel’s Augustine, the best biography I know of the great Bishop of Hippo (p. 8 ff – emphases mine):

Before devoting himself entirely to Mother Church, as he approached the age of forty, Augustine had had a concubine for about fifteen years, of whom he had been very fond and who had given him a son; then, at the same time as a fleeting engagement, a second short-lived liaison.  But only one woman really counted in his life, and that was his natural mother, Monica.

As we may guess from reading a few pages of Book IX.8 of the Confessions, Patricius – Augustine’s father – had taken a wife in Thagaste from a milieu close to his own.  He had married Monica, as his would describe it in a phrase borrowed from Virgil, “in the fullness of her nubility”, which means that he had not married a child, a practice that was in any case more rare then in Africa that in Rome itself.  The couple had three children, in what order we do not know: a girl, who remains anonymous to us, but who, once widowed, would later become the superior of a community of nuns, and two boys, Augustine and Navigius, whom we shall find with his brother in Italy, at Cassiciacum, then at Ostia at their dying mother’s bedside.  …

So Monica had been born into a Christian family and was, as we would say today, a practicing believer.  The religious practices of Christians at that time, in North Africa, sometimes included aspects that would be surprising to us, such as the custom of taking offerings of food to the tombs of martyrs, for agapes that only too often degenerated into orgies; an obvious survival of the pagan festival of the Parentalia.  Of course, Monica did not indulge in those excesses.  If the baskets she brought to the cemetery contained, besides gruel and bread, a pitcher of unadulterated wine, when the time came to share libations with other faithful, she herself would take only a tiny amount, diluted with water, sipped from a goblet in front of every tomb visited.  Was this sobriety a memory of some experience in her early youth?  Augustine tells this story which he says he heard from the lady herself.  Raised in temperance by an old serving-woman who enjoyed the complete trust of Monica’s parents, she had fallen into a bad habit.  Well-behaved girl that she was, she was sent to the cellar to fetch wine from the cask, but before using the goblet she had brought to fill the carafe she would just wet her lips with the wine, not because she liked it, says Augustine, but out of childish mischief.  But gradually she had acquired a taste for it, to the point where she was drinking entire goblets of it with great gusto.  Fortunately she had cured herself of this incipient liking for drink in a burst of pride: the maidservant who accompanied her to the cellar, having fallen out one day with her young mistress insultingly called he a “little wine bibber”.  Stung to the quick, Monica had immediately stopped her habit.

Think now about the spiritual works of mercy: admonish the sinner.  Consider how that servant affected WESTERN CIVILIZATION because of what she did for the future mother of St. Augustine, arguably one of the most influential figures in history.

In the online Pusey translation… a little dated:

And yet (as Thy handmaid told me her son) there had crept upon her a love of wine. For when (as the manner was) she, as though a sober maiden, was bidden by her parents to draw wine out of the hogshed, holding the vessel under the opening, before she poured the wine into the flagon, she sipped a little with the tip of her lips; for more her instinctive feelings refused. For this she did, not out of any desire of drink, but out of the exuberance of youth, whereby it boils over in mirthful freaks, which in youthful spirits are wont to be kept under by the gravity of their elders. And thus by adding to that little, daily littles (for whoso despiseth little things shall fall by little and little), she had fallen into such a habit as greedily to drink off her little cup brim-full almost of wine. Where was then that discreet old woman, and that her earnest countermanding? Would aught avail against a secret disease, if Thy healing hand, O Lord, watched not over us? Father, mother, and governors absent, Thou present, who createdst, who callest, who also by those set over us, workest something towards the salvation of our souls, what didst Thou then, O my God? how didst Thou cure her? how heal her? didst Thou not out of another soul bring forth a hard and a sharp taunt, like a lancet out of Thy secret store, and with one touch remove all that foul stuff? For a maid-servant with whom she used to go to the cellar, falling to words (as it happens) with her little mistress, when alone with her, taunted her with this fault, with most bitter insult, calling her wine-bibber. With which taunt she, stung to the quick, saw the foulness of her fault, and instantly condemned and forsook it. As flattering friends pervert, so reproachful enemies mostly correct. Yet not what by them Thou doest, but what themselves purposed, dost Thou repay them. For she in her anger sought to vex her young mistress, not to amend her; and did it in private, either for that the time and place of the quarrel so found them; or lest herself also should have anger, for discovering it thus late. But Thou, Lord, Governor of all in heaven and earth, who turnest to Thy purposes the deepest currents, and the ruled turbulence of the tide of times, didst by the very unhealthiness of one soul heal another; lest any, when he observes this, should ascribe it to his own power, even when another, whom he wished to be reformed, is reformed through words of his.

Fr. Z is the guy who runs this blog. o{]:¬)
View all posts by Fr. John Zuhlsdorf →
This entry was posted in Patristiblogging and tagged alcoholism, St. Augustine of Hippo, St. Monica. Bookmark the permalink.