Nuns On The Bus UPDATE!

Oh… how I hope this Nuns On The Bus tour never ends!

Nuns on the Bus visit Sinsinawa and Janesville

The writer went to find the Nuns On The Bus!

Yes, folks, while some sisters are working to save our planet by fighting McDonald’s, others are driving around out there on a pollution belching bus, pouring ozone-destoying hydro-carbons into the atmosphere for the sake of fact-obfuscating self-promotion.

The Nuns on the Bus would have us think that the Congregation for the Doctrine of the Faith’s reforming efforts offered to the Leadership Conference of Women Religious (a subsidiary of the Magisterium on Nuns), was somehow about defending all women religious in their time of persecution by the mean ol’ Vatican.  That’s isn’t what the CDF is doing, but let’s not allow facts to confuse the Nuns On The Bus.

In any event, check out the photos and fun.

There is also a video of Sr Simone Campbell’s opening remarks at Sinsinawa.

According to Sister, this is how they came up with the Nuns On The Bus idea. I add just a couple comments of my own:

“I’m not used to this celebrity kind of stuff,” she said. [LOL! Right!  That’s right, Sister, you are a huge celebrity now!] She also had some details on the genesis of the trip: “The whole bus trip is a gift of the Spirit.  [Lemme think…. The Gifts of the Holy Spirit are wisdom, understanding, counsel, knowledge, fortitude, piety, and ride on the bus…. NO! Wait! That doesn’t sound right.  Lemme try again… wisdom, understanding, counsel, knowledge,… ] The only inspiration I had was to ask for help. [And look what they’re doing now!] And we asked for help in DC, and our colleagues, all the big players, they came together and helped us brainstorm this. [A bus ride!] None of us remember exactly who thought of a bus trip in this brainstorm session, but it just caught on. [Think of all the brain power and gifts of the spirit it took to come up with this plan.] And then somebody has done a bus trip, so they knew you can wrap a bus. [?!?  ….. crickets…. ] You know, if it had been left to us, we would have cut out felt letters and stuck them on cardboard and we would have tied it onto a Prius, and driven around, and thought we had done it. No, no, no! [NO! That’s too liturrrrrrgical!] So they said no, we wrap a big bus, and then I think, [Hey… isn’t the thinking part s’posed to come first?] we have forty-five seats, that’s what I thought. [Which should be comfortable for, say, 22.] Oh good, it’s on now, and I can call all my friends to get on. [Get on, Sister!] And they told me, Simone, you don’t have forty-five seats, you got seven, that’s all you control. Seven seats? So then I thought it was a little bus; they say no…” (end of video) [… crickets… ]

Hmmmm… maybe it lost something without the video. You can also see that.

One of the take-aways from this is that there are only seven of them on the bus.  Did I get that right?  Seven?  All those carbon emissions so that Sister can stand in front of cameras and talk about herself?

In the meantime, the spectacularly obtuse, and simultaneously mendacious, Lawrence O’Donnell of CNN, had Sr. Simone on.  This is so warped, all you can do is count the lies and laugh! 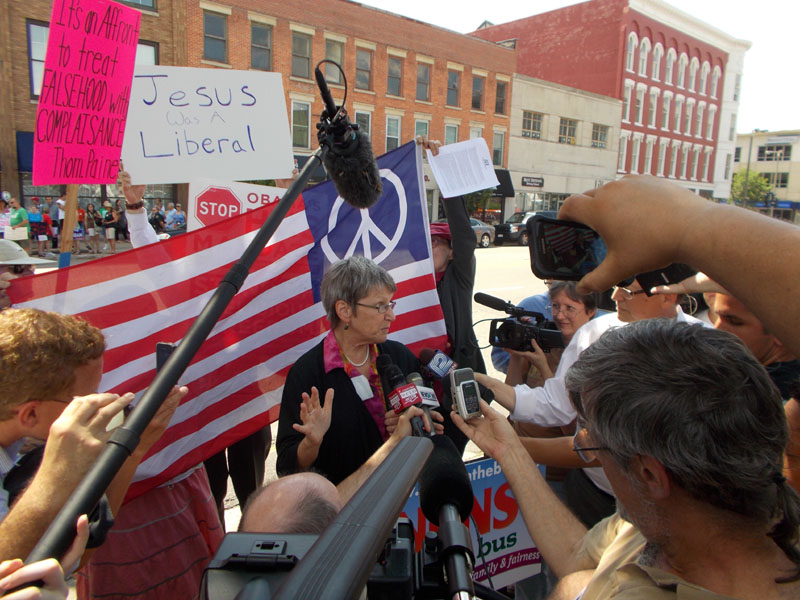 Wasn’t there a movie about a bus that couldn’t stop?

Oh… how I hope this nun bus tour never ends!

Fr. Z is the guy who runs this blog. o{]:¬)
View all posts by Fr. John Zuhlsdorf →
This entry was posted in Just Too Cool, Lighter fare, Magisterium of Nuns, Throwing a Nutty and tagged magisterium of nuns, Nuns On The Bus, Sr. Simone Campbell. Bookmark the permalink.