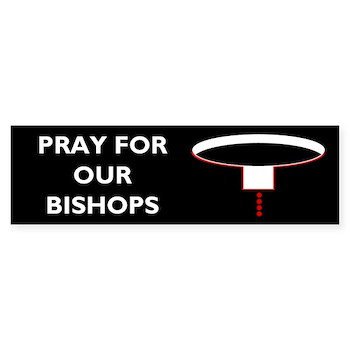 The present episode of EWTN’s The World Over with Raymond Arroyo features Dr. Stephen Schneck, Chairman of Catholics for Obama, and Most Rev. Robert C. Morlino, Bishop of Madison.

The video of the whole episode is HERE.

Arroyo challenges Dr. Schenck especially about how he can support the Democrat Party’s platform.  It gets a little fiery.  Interesting.

One of the things that Arroyo asks Bp. Morlino concerns Sr. Simone Campbell’s claim that the US Bishops condemned Rep. Paul Ryan’s budget proposal.  Morlino clarifies that a committee of the Conference, not the US bishops, offered an opinion.  He also talks about the different roles of bishops and laity in making prudential judgments about moral contingent choices which don’t necessarily concern the promotion of intrinsic evils (e.g., job creation or entitlement reform v. promotion of tax-payer funded abortion).

One of the best quotes is that “laypeople do not need the bishops permission to do authentic lay ministry”.  Bingo.

Bp. Morlino also reminds us that women religious (e.g., Sr. Simone Campbell) are technically lay people, but we don’t look to them, as someone who is called to live the consecrated life, to engage in political issues in the same way that lay people must.

He also gets into the problem of politics becoming a pastoral problem. There is a polarization between pro-life Catholics and pro-social justice Catholics. This is something I wish he had had more time to expand on. He brings up the point that, this political season sees an even deeper polarization. Moreover, “Why are political considerations more basic in a believer than faith considerations?”

If I can be so bold as to comment on the issue raised by Bp. Morlino, …

… I respond saying that the root of the problem is the separation of abortion from social justice.

The right of an innocent child to life, no matter how the child was conceived, is THE social justice issue! There is nothing more basic to justice (that which is due) than the right to life itself, as God has given it. Those who promote abortion have successfully tricked people into thinking that abortion is a women’s issue. We must reconnect our moral arguments about abortion and the right to life to properly understood social justice.

The USCCB committee letter, from the Committee on Domestic Justice and Human Development, to the US House of Representative’s Committee on Agriculture is HERE.

This is the letter some claim represents a condemnation by “the bishops” of Rep. Paul Ryan’s budget proposals.