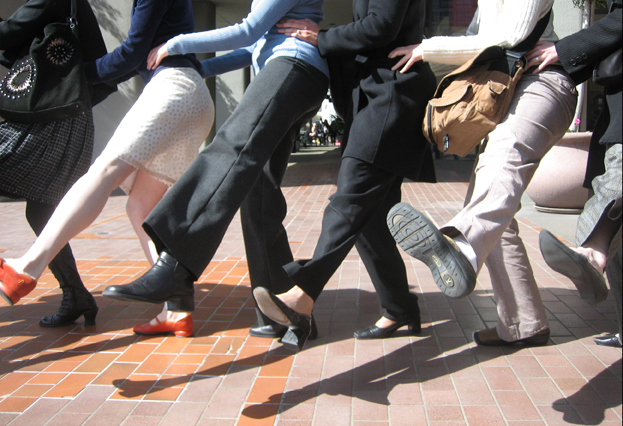 When the liberals gush and gush and ooze about Pope Francis, the most wonderfullest, fluffiest Pope ehvurrrrr, they smear another brush-stroke of paint on the floor as their place in the corner gets smaller and smaller.

One of these days, Pope Francis is going to do something that ends the liberal conga line.   For example, he will issue a document along the lines of Ordinatio diaconalis.   They will turn on Pope Fluffy, but it’ll cost ’em.

In any event, I saw this from Sandro Magister:

Even the Pope Critiques Himself. And Corrects Three Errors
He is lowering the “rating” of his interview with Scalfari.

Rectifying his judgments on Vatican Council II. Distancing himself from the progressive currents that have applauded him until now. But the media are silent on this change of pace

ROME, November 22, 2013 – In the span of a few days Pope Francis has corrected or brought about the correction of a few significant features of his public image. At least three of them.

The first concerns the conversation that he had with Eugenio Scalfari, set down in writing by this champion of atheistic thought in “la Repubblica” of October 1.

The transcript of the conversation had in effect generated widespread dismay, because of some of the statements from the mouth of Francis that sounded more congenial to the dominant secular thinking than to Catholic doctrine. Like the following:

“Each one has his idea of good and evil and must choose to follow the good and fight the evil as he understands them.”

At the same time, however, the interview was immediately confirmed by Fr. Federico Lombardi as “faithful to the thought“ of the pope and “reliable in its general sense.”

Not only that. A few hours after it was published in “la Repubblica,” the interview was reproduced in its entirety both in “L’Osservatore Romano” and on the official website of the Holy See, on a par with the other discourses and documents of the Pope.  [Goat rodeo.]

But even the calibrated and thoroughly studied interview with Pope Francis in “La Civiltà Cattolica” – published on September 19 by sixteen magazines of the Society of Jesus in eleven languages – has in recent days been taken into the shop of things to be corrected. [The Big Interview™]

On a key point: the interpretation of Vatican Council II.

[Don’t forget the letter to Archbp. Marchetto!] This has been made clear by a passage of the letter written by Francis himself to Archbishop Agostino Marchetto on the occasion of the presentation on November 12 of a volume in his honor, against the solemn background of the Campidoglio. A letter that the pope wanted to be read in public.

The passage is the following:

“You have demonstrated this love [of the Church] in many ways, including by correcting an error or imprecision on my part – and for this I thank you from my heart – but above all it has been manifested in all its purity in your studies of Vatican Council II. I have said this to you once, dear Archbishop Marchetto, and I want to repeat it today, that I consider you the best hermeneut of Vatican Council II.”

The definition of Marchetto as “the best hermeneut” of the Council is striking in itself. Marchetto has in fact always been the most implacable critic of that “school of Bologna” – founded by Giuseppe Dossetti and Giuseppe Alberigo and today directed by Professor Alberto Melloni – which has the worldwide monopoly on the interpretation of Vatican II, in a progressive vein.

The hermeneutic of the Council upheld by Marchetto is the same as that of Benedict XVI: not of “rupture” and “new beginning,” but of “reform in the continuity of the one subject Church.” And it is this hermeneutic that Pope Francis has wanted to signify that he shares, in bestowing such high appreciation on Marchetto.

But if one rereads the succinct passage that Francis dedicates to Vatican II in the interview with “La Civiltà Cattolica,” one gets a different impression. “Yes, there are hermeneutical lines of continuity and of discontinuity,” the pope concedes. “Nonetheless,” he adds, “one thing is clear”: Vatican II was “a service to the people” consisting in “a reinterpretation of the Gospel in the light of contemporary culture.”

In the few lines of the interview dedicated to the Council, Bergoglio defines its essence this way three times, also applying it to the reform of the liturgy.

The third correction is consistent with the two previous ones. It concerns the “progressive” tone that Pope Francis has seen stamped upon the the first three months of his pontificate.

One month ago, on October 17, Bergoglio seemed to have confirmed this profile of his once again when in the morning homily at Santa Marta he directed stinging words against Christians who turn the faith into a “moralistic ideology,” entirely made up of “prescriptions without goodness.”

But one month later, on November 18, in another morning homily the pope played a completely different tune. [Which in itself is problematic.  But always remember that those daily sermons are off-the-cuff, non-magisterial, musings.]

He used the revolt of the Maccabees against the dominant powers of the age as the point of departure for a tremendous tongue-lashing of that “adolescent progressivism,” Catholic as well, which is disposed to submit to the “hegemonic uniformity” of the “one form of thought that is the fruit of worldliness.” [I have been busy for a few days.  Does anyone know if the Fishwrap, the National Schismatic Reporter, quoted their Pope Fluffy?]

It is not true, Francis said, that “in the face of any choice whatsoever it is right to move forward regardless, rather than remain faithful to one’s traditions.” The result of negotiating over everything is that values are so emptied of meaning as to end up merely “nominal values, not real.” Even more, one ends up negotiating precisely over “the thing essential to one’s very being, fidelity to the Lord.”

The one form of thought that dominates the world – the pope continues – legalizes even “death sentences,” even “human sacrifices.” “But you,” he asked, “do you thing that there are no human sacrifices today? There are so many, so many! And there are laws to protect them.”

It is difficult not to see in this pained cry of Pope Francis the countless human lives mown down before birth with abortion, or cut off with euthanasia.

With the exception of a few Catholic outlets, the media of the entire world ignored this homily of Pope Francis, which in effect starkly contradicts the progressive or even revolutionary framework within which he is generally described.

But now it is part of the record. And there it remains. [Though we are not sure which record it is on.]

Fr. Z is the guy who runs this blog. o{]:¬)
View all posts by Fr. John Zuhlsdorf →
This entry was posted in Francis, Reading Francis Through Benedict, The Drill and tagged Pope Francis, Sandro Magister. Bookmark the permalink.