Of Roast Beef, Rat Excrement and You 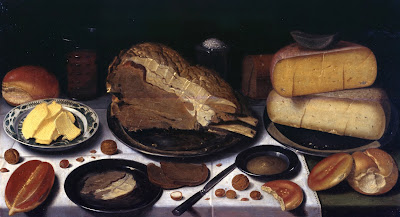 From the always interesting Laudator.  This seemed appropriate for Shrove Tuesday:

When mighty rost Beef was the Englishman’s Food,
It enabled our Hearts, and enriched our Blood;
Our Soldiers were brave, and our Courtiers were good.
Oh the Rost Beef of Old England,
And Old England’s Rost Beef!

This patriotic song surfaces constantly in the naval novels I enjoy, especially the mighty series by Patrick O’Brian.  I don’t like this verse at all:

When good Queen Elizabeth sat on the throne,
Ere coffee, or tea, or such slip-slops were known,
The world was in terror if e’er she did frown.

So many things wrong with that verse.  Which it’s a horrid verse, as Preserved Killick would say.  NO COFFEE?

To correct for these errors, go NOW and buy some Mystic Monk Coffee and/or Tea.

My trip to England didn’t work for January, so I am thinking about April.

Meanwhile, a moment with Stephen, Preserved and Jack from The Mauritius Command:

‘Killick,’ said Stephen, ‘what’s amiss? Have you seen the ghost in the bread-room? Are you sick? Show me your tongue.’

When Killick had withdrawn his tongue, a flannely object of inordinate length, he said paler still, ‘Is there a ghost in the bread-room, sir? Oh, no, and I was there in the middle watch. Oh, sir, I might a seen it.’

‘There is always a ghost in the bread-room. Light along that pot, will you now?’

‘I durs’nt, sir, begging your pardon. There’s worse news than the ghost, even. Them wicked old rats got at the coffee, sir, and I doubt there’s another pot in the barky.’

‘Preserved Killick, pass me that pot, or you will join the ghost in the bread-room, and howl forevermore.’

With extreme unwillingness Killick put the pot on the very edge of the table, muttering, ‘Oh, I’ll cop it: oh, I’ll cop it.’

Jack walked in, pouring himself a cup as he bade Stephen good morning, and said, ‘I am afraid they are all in.’

‘All the Frenchmen are in harbour, with their two Indiamen and the Victor. Have not you been on deck? We are lying off Port-Louis. The coffee has a damned odd taste.’

‘This I attribute to the excrement of rats. Rats have eaten our entire stock; and I take the present brew to be a mixture of the scrapings at the bottom of the sack.’

‘I thought it had a familiar tang,’ said Jack. ‘Killick, you may tell Mr Seymour, with my compliments, that you are to have a boat. And if you don’t find at least a stone of beans among the squadron, you need not come back. It is no use trying the Néréide; she don’t drink any.’

When the pot had been jealously divided down to its ultimate dregs, dregs that might have been called dubious, had there been any doubt of their nature, they went on deck.

Don’t get stuck with rat excrement in your coffee!