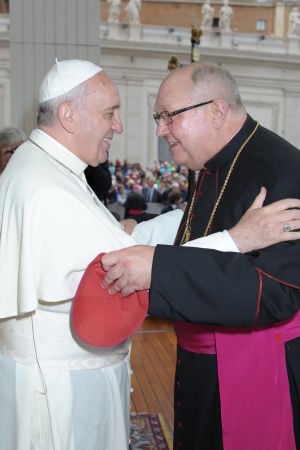 The the Wisconsin State Journal there is a long interview with His Excellency Most Rev. Robert C. Morlino, Bishop of Madison (aka “The Extraordinary Ordinary”), occasioned by the approaching 1st anniversary of the election of Pope Francis.   Full transcript HERE

Many excerpts are worth teasing out, but I thought this one to be especially good:

State Journal: In December, you gave an interview to the website Real Clear Religion in which you suggested Pope Francis has actually helped make you a stronger culture warrior.

State Journal: Can you explain a little more how that is?

Morlino: Well, in order to meet Christ, we have to stand up for the whole Christ. Standing up for the whole Christ — How do you do that? What are the aspects of Christ and of his work that need work in that vicinity or this region? That’s the judgment the bishop has to make. So I have to see kind of which aspects of the truth of Christ need work here, and when I see that, I kind of end up right back where I was. I have to speak up forcibly about these issues. But I have never failed to teach also about God’s mercy. Never. It’s one of my major themes. It always has been. But God’s mercy is always balanced with his judgment, and we have to think that through and work that out. It is unfortunate that some people, especially in your profession, have taken the occasion to widely misinterpret Francis, particularly with that statement, “Who am I to judge?” I have had to explain away what the mass media have said about that far more times than I’d like to count.

State Journal: In a recent Catholic Herald column, you said that comment has been “outrageously misinterpreted.” Tell us how.

Morlino: When Francis was telling us about that, he was talking about a particular bishop whom he had just given a job in the Vatican, and it was found out that in South America where this bishop had been, he had been charged with certain misconduct. So the question came to Francis, “How could you bring him in?” And Francis said, “The man has admitted he did wrong, he is sorry, and he has changed his life through the grace of Jesus Christ. Who am I to judge him now?” That is hardly a statement that somehow justifies homosexual behavior. This is another thing: When he says, “What do you want from me, I am the son of the church?” From an Argentinean background, that’s a very strong statement. In the United States of America, that’s a very generic statement that could mean anything, because Nancy Pelosi thinks she’s a loyal daughter of the church, so she doesn’t know what church is and she doesn’t know what loyal is. This man knows what loyalty to the church is, he was surrounded by it, there was a strong cultural Catholicism in Argentina which we lost in the United States long ago. So that statement has to be taken very seriously, and it’s kind of passed over. The pope made another statement at Mass this last week. I’m sure it was some kind of a slip on his part, because again, he’s worried about bringing people closer to Christ. He’s not watching every word, and you can’t do that when you’re trying to connect with people. He was talking about how the Holy Spirit is at work in our lives, that he gives us gifts, that he’s present in his gifts. And he was giving all kinds of examples of how the Holy Spirit works through the gifts of each one of us every day and he does this for everyone. So he said the Holy Spirit is a real worker, the Holy Spirit is a hard worker, and then he said, “Not like trade union workers.” I didn’t see that in the press anywhere, that he said that. But he says, “Who am I to judge?” and it’s all over the world. The mass media are trying to create a spirit of Pope Francis, just as they created a spirit of Vatican II. Many Catholics fell for that the first time. I hope they won’t fall for that again.

State Journal: As to the initial quote aboard the papal airplane, the pope said, “If someone is gay and he searches for the Lord and has good will, who am I to judge?” He said “good will” — two words, not one word — which is critical in this context, correct?

Morlino: Right. Good will, meaning the will to obey the teaching of the church and the natural law that comes from our humanity. Sure. That kind of good will.

State Journal: And that’s what seems to have been lost in some interpretations, right?

There is a lot more red meat in the interview, which I urge you to read.

I applaud the outstanding Bp. Morlino for his willingness to go into the lion’s den and talk to the lions.

Let us not be afraid to be happy – happy – culture warriors of this stripe.