Archbishop Salvatore Cordileone of San Francisco is taking flack from the usual suspects for his support of an initiative at Star of the Sea to build a corps of altar boys (not girls – HERE) and for having an entirely reasonable handbook for teachers in Catholic schools.  It contains guidelines on matters of morals.

Imagine how well that goes over in San Fran (aka LaLa Land) and elsewhere where the anti-God and anti-nature world view reigns supreme in the shadow of the Enemy’s dark tail.

At the Cardinal Newman Society (CNS), you will find piece about an op-ed at the San Francisco Chronicle (which is behind a paywall) written by a staffer of CNS.

There is some background in a piece at Crisis from a few days ago.  HERE

Here is part of the CNS piece.  Be sure to go there for the whole thing.  My emphases:

But the criticism thrown at Archbishop Cordileone is wholly undeserved, argued Bob Laird, defending the San Francisco archbishop as “a true shepherd of Catholic schools.”

“If the mission of Catholic schools is to form students both in knowledge and in faith, then he is simply doing his job to ensure that teachers have the necessary qualifications for religious education,” Laird wrote.

“Hasn’t the National Football League been pressured to care about the image that its employees (the players) portray off as well as on the field? Would it make sense for a Burger King employee to publicly tout the superior qualities of a McDonald’s Big Mac? I don’t think so,” he said. “It also doesn’t make sense to employ a teacher in a religious school who openly flouts the beliefs of the employer.”

“Dissenting opinions are not new in the Church, and they deserve a patient and merciful response,” Laird noted in the article. “But Christ did not alter his teachings in order to please his listeners… It’s ludicrous to think that Catholic school teachers should be invited to teach dissent by word or example.”

He highlighted the transitional period that comprises the teenage years, noting that it is especially a time of developing the values and habits one will likely carry for the rest of his or her life. “Why would the Catholic Church provide anything other than Catholic formation? And if faculty and staff members openly object to what it means to be Catholic, why would they be qualified for employment at a Catholic school?” Laird wrote.

He argued that it is “the archbishop’s job to lead Catholics and to protect Catholic students from wayward interpretations of our Catholic faith that have crept into society.”

“The archbishop is not ‘out of touch with the community that he has been assigned to serve,’ as The Chronicle has argued. To the contrary, he understands it quite well,” Laird concluded.  [That is to say, he understands well how misguided and confused so many people are in SF.]

Archbp. Cordileone needs our support in prayer.  He is on the cutting edge of the New Evangelization.  He is at the FOB of the culture war.

Be sure to watch daily the newsfeed of the CNS on my right side bar.  It is quite good.

Meanwhile, in a related piece at RedState I saw a great headline:

Rather like the point of the CNS piece. Alas, we are living in times when we can genuinely be surprised, in a good way, when Catholic bishops openly speak and act like Catholic bishops.

Think about how much the Devil hates bishops.

Consider how good the Enemy is at using human dupes as agents in the demonic war against Christ, His Church and bishops.

The Enemy, angelic in nature though fallen, is relentless and expert in twisting people away from common sense and from nature. The Enemy incessantly batters away at good bishops and priests to silence them, at least, if they cannot make them wholly his own. 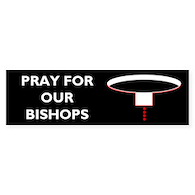