The “historical Jesus” is only of passing interest in comparison to the Lord of Salvation.

The Daily Mail has a piece about how archaeologists, reading medieval manuscripts, have identified a likely place … 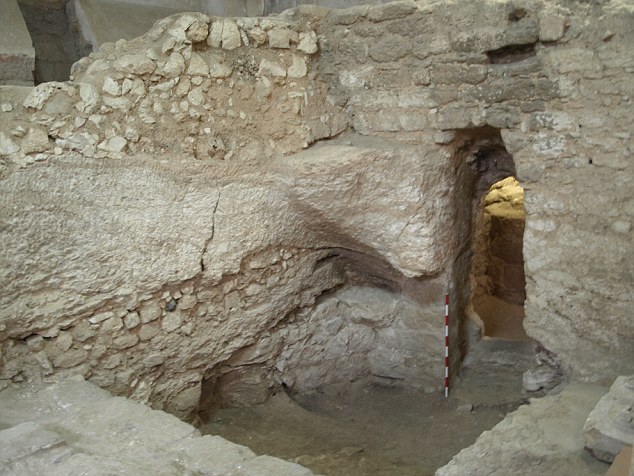 Hewn into a hillside, this is the humble stone and mortar house where a scholar believes Jesus was raised.

It has been dated to the early 1st century by a British archaeologist who says an ancient text points to the building as being the home in Nazareth where Mary and Joseph brought up the son of God.

Professor Ken Dark says De Locis Sanctis, written in 670 by Irish monk Adomnan, described the house as located between two tombs and below a church.

The text was based on a pilgrimage to Nazareth made by the Frankish bishop Arculf and tells of a church ‘where once there was the house in which the Lord was nourished in his infancy’.

In the Byzantine era, and again in the 12th century at the time of the Crusades, the ruins of the building were incorporated into churches – suggesting it was of great significance and needed to be protected, the Reading University archaeologist argues.

The house was cut into a limestone hillside and has a series of rooms and a stairway. One of the original doorways has survived, as has part of the original chalk floor.

Writing in the journal Biblical Archaeological Review, Dr Dark says that while he has no proof, there is ‘no good reason’ to believe it was not Jesus’s home.

He has been researching the ruins, in what is now northern Israel, since 2006.

The house was first identified as significant in the 1880s after the chance discovery of by nuns an ancient cistern. An excavation was ordered.

The limestone items suggest a Jewish family lived there as Jews believed that limestone could not be impure – and Mary and Joseph were living in Nazareth when the angel Gabriel revealed that Mary would give birth to the son of God, a baby to be named Jesus.

Dr Dark, a specialist in first century and Christian archaeology, argues that the house he believes was Jesus’s boyhood home matches Adomnan’s account.

It is located beneath the Sisters of Nazareth Convent, which is across the road from Church of Annunciation in Nazareth.

The Adomnan text describes two churches in Nazareth, one of which was the Church of Annunciation.

Dr Dark writes: ‘The other stood nearby and was built near a vault that also contained a spring and the remains of two tombs.’

The Sisters of Nazareth Convent matches this because there is evidence of a large Byzantine church with a spring and two tombs in its crypt, he says.

Dr Dark writes: ‘Great efforts had been made to encompass the remains of this building. Both the tombs and the house were decorated with mosaics in the Byzantine period, suggesting that they were of special importance, and possibly venerated.

‘Was this the house where Jesus grew up? It is impossible to say on archaeological grounds.

‘On the other hand, there is no good archaeological reason why such an identification should be discounted.’

In 2009 archaeologists from the Israel Antiquities Authority found another 1st century home nearby they believed had been occupied by a Jewish family. However they were able to say only that Jesus may have lived near the site.

Go look at that page.  There are lots of photos.

Fr. Z is the guy who runs this blog. o{]:¬)
View all posts by Fr. John Zuhlsdorf →
This entry was posted in SESSIUNCULA and tagged historical Jesus, Nazareth. Bookmark the permalink.