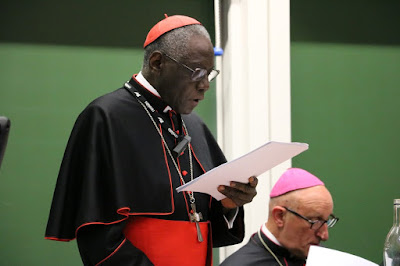 If as a Church we want to effect something good and lasting, it has to be rooted in our sacred liturgical worship of God.  That’s our source.  That’s our summit.   This is where our identity is most deeply shaped.  We need a revitalization of our worship.

From the UK’s best Catholic weekly, The Catholic Herald, we have some news from the Sacra Liturgia conference underway. I soooo wanted to go to that.  My emphases and comments.

Cardinal Robert Sarah, the Vatican’s liturgy chief, has asked priests to begin celebrating Mass ad orientem, that is, facing east rather than towards the congregation.

The proposed reform is arguably the biggest liturgical announcement since Benedict XVI’s 2007 motu proprio Summorum Pontificum gave greater freedom for priests to celebrate the Traditional Latin Mass.  [The great liturgical scholar Klaus Gamber said that the reversal of our altars was the most damaging (uncalled for) innovation after Vatican II.]

Speaking at the Sacra Liturgia conference in London on Wednesday, the Guinean cardinal, who is Prefect of the Congregation for Divine Worship, addressed priests who were present, saying: “It is very important that we return as soon as possible to a common orientation, of priests and the faithful turned together in the same direction – eastwards or at least towards the apse – to the Lord who comes”.

The cardinal continued: “I ask you to implement this practice wherever possible.”  [It is possible in very many places.] “Your own pastoral judgement will determine how and when this is possible, but perhaps beginning this on the first Sunday of Advent this year, when we attend ‘the Lord who will come’ and ‘who will not delay’.”

These words were met with prolonged applause in the conference hall.

Cardinal Sarah had spoken on previous occasions about the merits of ad orientem worship, saying that from the Offertory onwards it was “essential that the priest and faithful look together towards the east”.

But his specifying of the first Sunday of Advent – which falls this year on November 27 – gives a new urgency to his calls for this form of worship.

Speaking after Cardinal Sarah, Bishop Dominique Rey of Fréjus-Toulon said that, although he was “only one bishop of one diocese”, he would celebrate Mass ad orientem at his cathedral, and would address a letter to his diocese encouraging his priests to do the same.

In his talk, Cardinal Sarah also said that Pope Francis had asked him to begin a study of “the reform of the reform”, that is of adapting the liturgical reforms that followed the Second Vatican Council. The cardinal said the study would seek “to enrich the two forms of the Roman rite”. [Hmmmm.]

Cardinal Sarah said that much liturgical study had suggested that some post-conciliar reforms “may have been put together according to the spirit of the times” and “gone beyond” of the Fathers of Vatican II, in Sacrosanctum Concilium, the constitution on the liturgy.  [Buginicare.  Not to mention the mistranslation of 299 of the GIRM.]

He said that some “very serious misinterpretations of the liturgy” had crept in, thanks to an attitude to the liturgy which placed man rather than God at the centre. [yep]

“The liturgy is not about you and I,” Cardinal Sarah told the conference. “It is not where we celebrate our own identity or achievements or exalt or promote our own culture and local religious customs. The liturgy is first and foremost about God and what He has done for us.”

The Cardinal quoted Cardinal Joseph Ratzinger: “Forgetting about God is the most imminent danger of our age.”

Cardinal Sarah emphasised a “hermeneutic of continuity”, saying that it was necessary to implement Sacrosanctum Concilium fully: “The Fathers did not intend a revolution, but an evolution.”

He made some specific observations, praising the Ordinariate of Our Lady of Walsingham as an example of how the Church could be enriched by other traditions.

In remarks which he did not have time to deliver, but which were later published on Sacra Liturgia’s Facebook page, the cardinal also encouraged kneeling at the consecration and for the reception of Communion. “Where kneeling and genuflection have disappeared from the liturgy, they need to be restored, in particular for our reception of our Blessed Lord in Holy Communion.”  [Kneeling for Communion!  And let’s all receive on the tongue!] Fr. Z is the guy who runs this blog. o{]:¬)
View all posts by Fr. John Zuhlsdorf →
This entry was posted in ACTION ITEM!, Brick by Brick, Just Too Cool, Liturgy Science Theatre 3000 and tagged ad orientem, ADVENT, Brick by Brick, Card. Sarah, Save The Liturgy Save The World. Bookmark the permalink.