First there was a piece Fr. Peter Stravinskas, who made suggestions about how the older, traditional form of Mass should be altered.  HERE I think he was wrong in the very notion of adaptations… now, at least. We need a long period of stability before the organic development of worship can take place in a healthy way. We need at least a generation, a life time, for the Usus Antiquior to become normal again.  Fr. Stravinskas has made some great contributions over the years (e.g., he was a staunch ally in the trenches during the first “new translation” war… a second is looming – TWI & TWII?), but I think he put his foot wrong in this topic. Let’s move on.

Now at Catholic World Report we see a piece by Dr. Adam A. J. DeVille, a prof at the University of Saint Francis in Fort Wayne, IN. He offers Eastern Catholic liturgical rites as a source of mutual enrichment.  NB: DeVille isn’t talking about Eastern enrichment of the traditional Roman Rite specifically.  His is a more general East meets West presentation, what we Latins can learn from the East in the midst of our manifold liturgical woes.

DeVille hits the nail squarely several times.  As a matter of fact, he makes many of the points that I have been making for years.  For example, concerning the use of Scripture at Mass, the three year v. one year cycle, DeVille stresses that liturgy isn’t pedagogy and that the one year cycle, with its repetition (an important point for DeVille) ensures that people will remember the pericopes.   Right!  Back in 1993 I did an interview with Augustine Card. Mayer (founder of Sant’Anselmo, Prefect of the CDW, 1st President of the Pontifical Commission “Ecclesia Dei”) for the journal Sacred Music.  Mayer said:

CARDINAL MAYER:
I would say to a certain extent. Generally liturgy grows through the life
of the Church which is especially her prayer life. Now they sit down and
write it. First, I said it was very positive that we have this new richness
of scripture readings. On the other hand, I think nevertheless, one should
also say that we have done a bit too much. It somewhat surpasses the priest
and the faithful, especially some of the readings of the Old Testament.
Yes, in the old order of Mass the readings were restricted, but this also
guaranteed that certain readings would be heard, understood, and
remembered.

CARDINAL MAYER:
Yes. Yet, it seems to me that in the selection of the pericopes, there was
an exegetical approach rather than a liturgical approach in the choices
made. Liturgy is always a serving of and adoration of God. We must adore
God. The exegetical point of view can be different. The Novus Ordo has a
strongly didactic element. We have to admit that the liturgy has also this
purpose, but to put it first is wrong. First, is the cultic, understood
correctly of course. We have to concede that the didactic intention often
dominates now, no? But the first important aspect remains adoration,
latria. 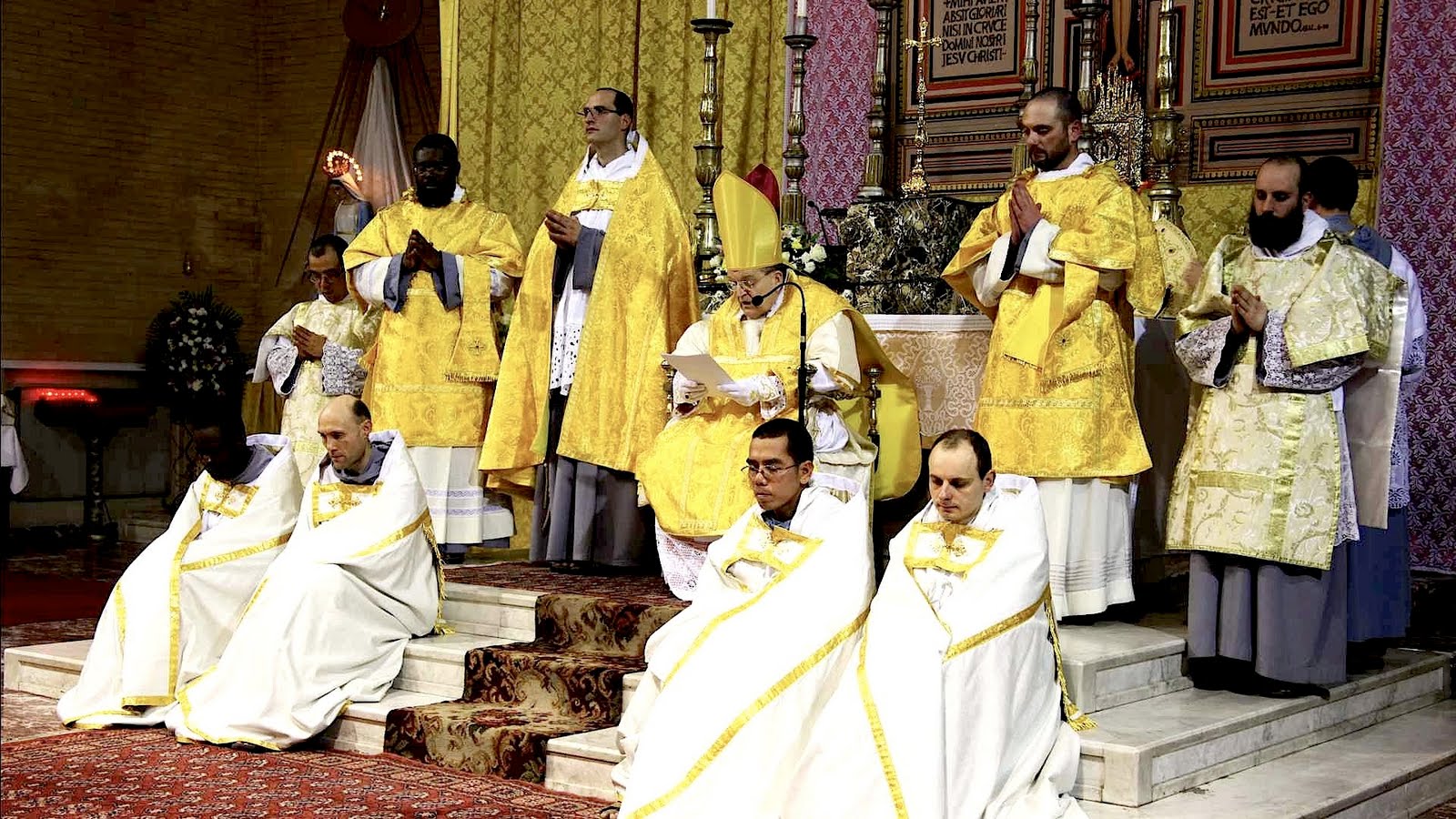 Repetition is the essence of liturgy.

DeVille describes the attitude of many liturgists as “condescending” towards lay people, or anyone who doesn’t have a degree.  This was a constant problem in the first translation war.  It continues today.  How true is his rhetorical question: “Have you… ever seriously consulted the people God about liturgical reform? Or was it imposed from the top down by a papal fiat beholden to a commission of ideologues?”  Bingo.

I read with great relish his devastating comment about “noble simplicity”.  Perpend:

The first kataphatic or positive way [NB: I am constantly banging on about the apophatic dimension of the traditional Roman Rite, so the introduction of these categories is welcome indeed.] the East might enrich the West is by helping it answer anew the question: what is liturgy for? If a Western liturgist observes Eastern liturgy, he will not have to wait long for the answer: it is for the glorification of God in the most beautiful manner possible. In the East, the Divine Liturgy is called that for a reason: it is about worshipping God in the beauty of holiness.  [I must add that the point of participation in sacred liturgical worship is because, one day, we are all going to die and go before The Judge.  We go to Mass because we want to go to heaven.  More on that elsewhere.]

To learn from the elaborate, complex beauty of Byzantine liturgy, you must first stop believing all the fantasies foisted on people in the 1960s, when it was put about that the liturgies of Christian antiquity were supposedly pristine examples of  simplicity, accessibility, and transparency (a “community meal”) until they were cluttered up with “medieval accretions” that Vatican II had to remove. Read Catherine

Pickstock’s magisterial reversal (in After Writing: On the Liturgical Consummation of Philosophy) of this romantic guff.   [Pickstock, while good, is not Mosebach, who is wonderful.  You MUST read The Heresy of Formlessness.]

In this spirit, stop assuming that young people today want “simple” liturgy using “relevant” or “modern” music patterned on concerts or Protestant mega-churches. They don’t. For almost a decade now, I have been sending hundreds of students a year to Byzantine liturgy as part of a class assignment. Every single time they come back staggered by what they see. Time and time again they confess, almost in a stammer, “these people are serious about worshipping God!”

Hatred of repetition is invariably justified by self-congratulatory talk about “noble simplicity.” It is neither. “Noble simplicity” is just a sanctimonious display of bourgeois iconoclasm, with its fetishes for “cool, clean lines” and “decorative sparseness.”

How about this one:

Abandon the mania for fake jobs: stop the scandal of a dozen lay people traipsing up to the front to hand out the Eucharist to a few dozen parishioners like biscuits at a parish tea.

And there’s this, about fasting and about feasting, including the really bad idea of transferring important feasts to Sundays:

[D]emand more of people before the Eucharist by restoring the ancient requirement of fasting from midnight, [See my posts on that and the POLL on the sidebar!] as the East still does. In fact, restore more serious fasting throughout the year. Stop assuming people can’t fast today or don’t need to. Many of us spend too much of our time sitting in front of screens—not hauling coal out of the ground, or thousand-pound nets of fish out of the sea. A little fasting for us with our bloated existence is eminently suitable.

The other side of fasting, of course, is feasting. Stop treating feasts like playthings to be yanked around—Epiphany is January 6th. Not 5th or 9th or 3rd. January sixth. Ascension is forty (40) days after Pascha—not 43 or whatever Fr. Spadaro’s new math would have us believe.  [heh]

He goes on to talk about the restoration of Octaves.  Do I hear an “Amen!”?

DeVille also touches on the disdain that Easterners, especially the Orthodox, experience when they see what we dopey Latins are doing to our churches and worship.  The horror! The horror!

Toward the end of his excellent offering – and these are hardly exhaustive of the good points he makes – we have to remember that our liturgical live costs money.  We need to sacrifice to build beautiful churches, make beautiful vestments, foster beautiful music.  On that note, please donate to the TMSM (501(c)(3))!

Lastly, I will expand on a superb suggestion: restoration of Communion rails.

DeVille takes the restoration of Communion rails a little farther, proposing even rood screens (the Western parallel of the Eastern iconostasis).  He states clearly: “These need not necessarily be Byzantine-style icons for there are plenty of beautiful Western liturgical artistic styles. But there is nothing preventing the West from fully adopting Byzantine imagery.”

However, I say “Let Romans be Romans”!

At the top of his essay, DeVille makes the important point that no Rite is pure and without outside influences.  The Roman Rite has strong strains of the Gallican uses, which were imported.  They were imported and absorbed and made Roman.  Something inherent in Romanitas is the ability to adopt and absorb. This is part of the Roman genius.  So, fine, we can also adopt and absorb Eastern elements. Modern people are rightly all agog when they attend splendid and grand Eastern Divine Liturgy.  I am too.  It is grand and unapologetic and precisely what it ought to be.  That has its effect, especially on those who are only partially churched, are low-church protestants, or are your typical, Novus Ordo suburban Catholic parishioners.

The Roman Rite in all its possibility has nothing to apologize for either.  When it is executed with all the stops pulled out, it is grand and precisely what it ought to be.

Thus, while I adore the Eastern Divine Liturgy (as a matter of fact for a couple of summers I sang for Ukrainian Divine Liturgy every day), I want Romans to be Romans.  Let’s bring our liturgical standards all the way up to what they can be. Yes, we can learn from the attitude of the East.  We don’t have to become quasi-Eastern in order to have worthy sacred liturgical worship.  DeVille doesn’t say that we do.  He is careful to distance himself from that.  But there are those who do think that way.  No.  A hundred times, No.

Hence, I am all in favor of DeVille’s piece.  You must rush quickly over there to read it in its entirety.

Fr. Z is the guy who runs this blog. o{]:¬)
View all posts by Fr. John Zuhlsdorf →
This entry was posted in "How To..." - Practical Notes, Both Lungs, Fr. Z KUDOS, Hard-Identity Catholicism, Liturgy Science Theatre 3000, Our Catholic Identity, The future and our choices and tagged Adam A. J. DeVille, Divine Liturgy, Eastern Catholics, mutual enrichment, worship. Bookmark the permalink.